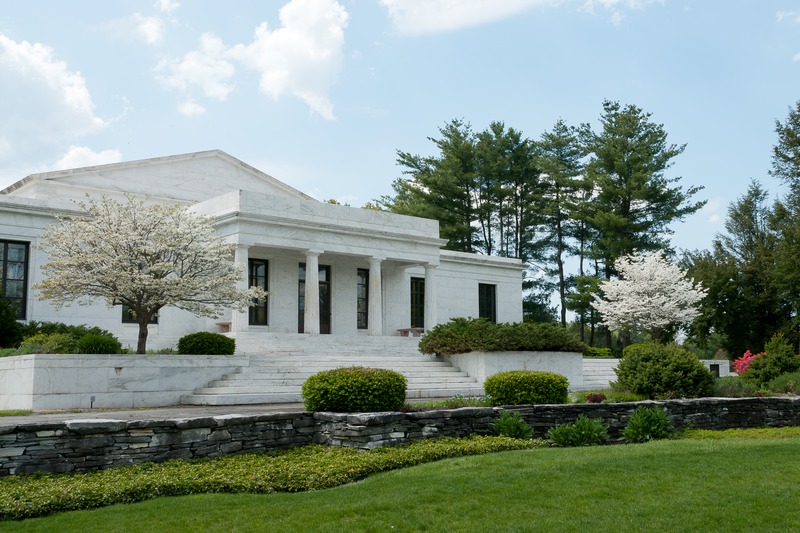 The Sterling and Francine Clark Art Institute is an art museum and research institution located in Williamstown, Massachusetts.

Its collection consists of European and American paintings, sculpture, prints, drawings, photographs, and decorative arts from the fourteenth to the early twentieth century.

Since its establishment in 1955, the Clark Art Institute has continued to grow its collection through acquisitions, gifts, and bequests.

The Clark Art Institute is best known for works of French Impressionism, especially the paintings of Renoir, academic paintings by Jean-Léon Gérôme and William Bouguereau, and a beautiful collection of British and American silver.

Highlights of the Clark Art Institute

“Offering the Panel to the Bullfighter” by Mary Cassatt

“Offering the Panel to the Bullfighter” by Mary Cassatt depicts a young woman flirtatiously offering a glass of water to a bullfighter, who dips panal (honeycomb) into it to make an energizing drink.

Cassatt made several paintings of local Spanish subjects during her stay in Spain in 1873. The vibrant colors and brushwork were inspired by Diego Velázquez, whose artworks, Cassatt studied during her travels to Madrid and Seville.

The Bullfighter costume is depicted with the decorations and elaborateness of a torero’s outfit that the Spanish call the “suit of lights.” The flamboyant matador costume is part of the drama of a bullfight, which is considered performance art.

“Women with a Dog” by Pierre Bonnard

“Women with a Dog” by Pierre Bonnard shows his sister and cousin playing with the family dog in a garden, with three figures behind them.

Bonnard compressed the space and simplified the forms, especially the women’s clothing. Japanese prints inspired the checked blouse, and he experimented with outlines shaped in pencil and ink, occasionally scratching them into the paint.

These decorative styles were pursued by the Le Nabis group of young painters, with whom Bonnard work with until 1900.

“Child with Red Hat” by Mary Cassatt is a pastel on paper, created in 1904. Cassatt admired Degas’s pastels, which had made a powerful impression on her when she first encountered them in an art dealer’s window in 1875.

“I used to go and flatten my nose against that window and absorb all I could of his art,” she later recalled. “It changed my life.

I saw art then as I wanted to see it.” This pastel and all of the following examples of “Pastels of Children” demonstrate Marry Cassett’s passion for pastel portraits and the enduring love of children.

“Summer Squall” by Winslow Homer depicts the foaming water violently surging over and around the flat rock in the foreground.

During calm waters, this spot was one of the artist’s favorite fishing locations. The sailboat in the distance dramatizes the human struggle with the forces of nature.

A sudden storm that Homer could see from his studio at Prouts Neck, Maine inspired this painting

“A Street in Venice” by John Singer Sargent is another of Sargent’s Venetian scenes depicting a backstreet in the shadows while light flashes on the buildings in the background. The painting is composed as a series of descending rectangles arranged in a near-telescopic manner.

The narrow alleyway, with its peeling plaster walls and the burst of light at the far end, draws us into the picture. This painting is closely cropped and is almost a photographic freeze-frame capturing a moment in time.

Two figures are silhouetted against a lighter background, captured in discussion showing the growing influence of photography on painted compositions.