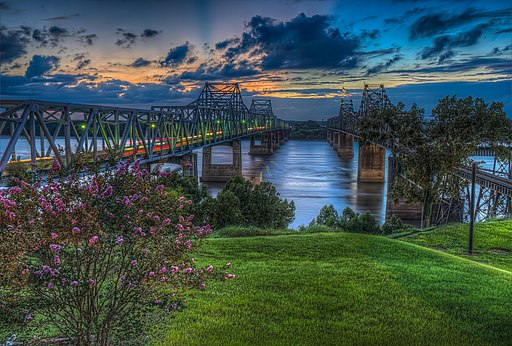 Mississippi is bordered by Tennessee, Alabama,  Louisiana, Arkansas, and the Gulf of Mexico. The Mississippi River mostly defines Mississippi’s western boundary, and Jackson is the state’s capital

Native Americans arrived in what today is referred to as the American South, about 10,000 BC.  In the Mississippi Delta, Native American settlements and agricultural fields were developed near the rivers with permanent villages.

After thousands of years, succeeding cultures developed rich and complex agricultural societies. Their large earthworks, which expressed their political and religious concepts, still stand throughout the Mississippi and Ohio River valleys.

The first major European expedition into the territory that became Mississippi was by Spanish explorers, who first passed through the state in 1540. The name “Mississippi” derives from a Native American word meaning “great waters” or “father of waters.”

In 1699, French colonists established the first European settlement. Through the 18th century, the area was ruled variously by Spanish, French, and British colonial governments.

After Great Britain’s victory in the French and Indian War (Seven Years’ War), the French surrendered the Mississippi area under the terms of the Treaty of Paris in 1763.

In 1817, Mississippi became the 20th state admitted to the Union. Before the American Civil War, Mississippi was the nation’s top cotton-producing state with enslaved persons accounting for 55% of the state population.

During the 1960s, Mississippi was the site of many prominent civil rights events. Today, over 35% of Mississippi’s population is African American, the highest percentage of any state.

Much of Mississippi’s fascinating heritage is preserved and exhibited in museums such as the Museum of Mississippi History, the Mississippi Civil Rights Museum, the B.B. King Museum & Delta Interpretive Center, the Delta Blues Museum, and the Ohr-O’Keefe Museum of Art.