The surviving originals are housed in the British Museum in London and at the Acropolis Museum in Athens.

The Nashville Parthenon was designed by Confederate veteran William Crawford Smith and constructed in 1897 as part of the Tennessee Centennial Exposition.

The Nashville Parthenon is an exact reproduction and was initially built of plaster, wood, and brick. The Parthenon was not intended to be permanent, but with its popularity, it was left standing after the Exposition.

Within the next 20 years, the weather and its exposure caused its deterioration, and it was then rebuilt on the same foundations, in permanent concrete, starting in 1920.

Today, as an Art Museum, the Nashville Parthenon’s permanent collection includes over 60 paintings by 19th and 20th century American artists. The giant Athena Parthenos statue, a replica of the lost original from the Greek Parthenon, was completed in 1990.

The statue of Athena Parthenos is cuirassed with her armor and helmeted, she carries a shield on her left arm and a small statue of Nike (Victory) in her right palm and stands 42 feet (13 m) high.

The Ancient Greek goddess is gilt with more than 8 pounds (3.6 kg) of gold leaf; an equally colossal serpent rears its head between her and her shield.

Local theater productions use the Nashville Parthenon as a backdrop for classic Greek plays, and other performances have been performed inside, at the foot of Athena’s statue.

The Parthenon in Nashville has been referenced and used as the backdrop for movies, TV, documentaries, and referenced in music and literature. 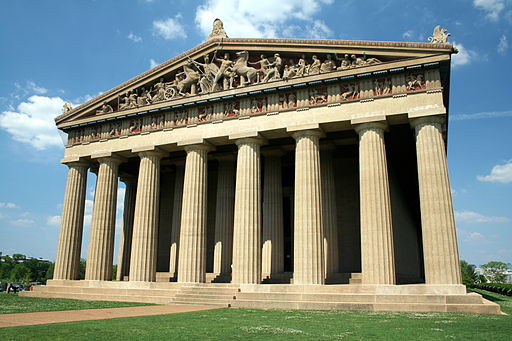 Highlights of the Parthenon in Nashville 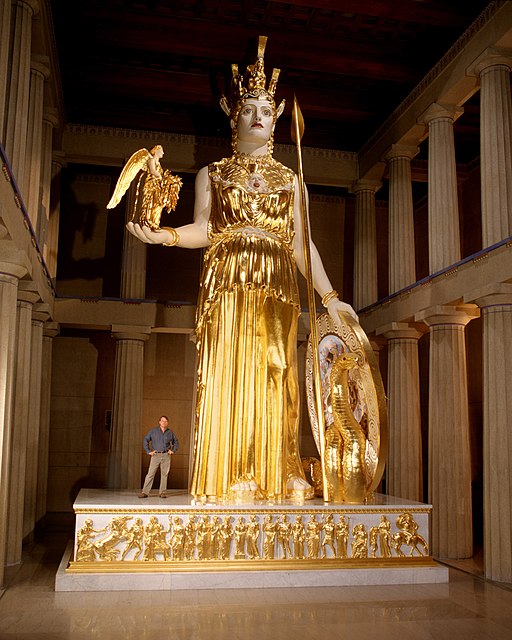 The original Parthenon on the Acropolis of Athens, 440 BC