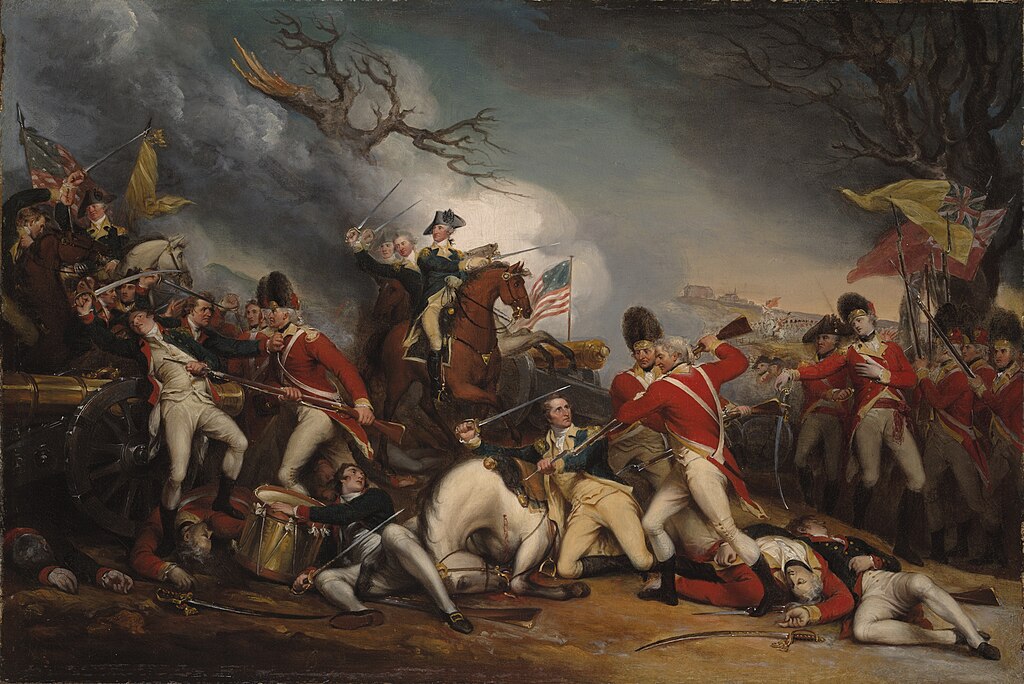 Mercer was commanding the leading division of the Continental Army when attacked by the British near Princeton, New Jersey. Mercer’s horse was killed, and two grenadiers attacked him. The British were in control of the battle at this moment.

General Mercer was treated for his wounds but died on January 12 as a result of a concussion caused by a musket butt to the head.

The artist greatly admired General George Washington and wrote in the catalog for the exhibition at Yale University in 1835:

“Thus, in the short space of nine days, an extensive country, an entire State, was wrested from the hands of a victorious enemy, superior in numbers, in arms and discipline, by the wisdom, activity, and energy of one great mind.”

This painting was a personal favorite of the artists, for when he was asked which pictures he would save from destruction in the Trumbull Gallery at Yale, he said this one.

The painting was Trumbull’s first depiction of an American victory. It is one of a series of historical paintings on the war, which also includes the Declaration of Independence and The Capture of the Hessians at Trenton, December 26, 1776.

The Battle of Princeton was fought on January 3, 1777, ending in a victory for the Colonials.

Following a successful surprise attack at Trenton early in the morning of late December 1776, Washington decided to attack the British in New Jersey before retiring to their winter quarters.

Washington crossed the Delaware River back into New Jersey, and his troops followed a few days later. Washington advanced to Princeton by a back road, where he pushed back the British force but had to retreat before Cornwallis arrived with reinforcements.

During the night, Washington evacuated his position, circled General Cornwallis’ army, and went to attack the British garrison at Princeton.

On January 3, Brigadier General Hugh Mercer of the Continental Army clashed with two British regiments under the command of Mawhood. General Lord Cornwallis had left 1,400 British troops under the control of Lieutenant Colonel Charles Mawhood in Princeton. Mercer and his troops were overrun, and Mercer was mortally wounded.

Washington sent a brigade of militia to help them. The militia, on seeing the flight of Mercer’s men, also began to flee. Washington rode up and rallied the fleeing army with reinforcements.

He then led the attack on Mawhood’s troops, driving them back. Mawhood gave the order to retreat, and most of the soldiers tried to flee to Cornwallis in Trenton.

After the battle, Washington moved his army to Morristown, and with their third victory in 10 days, the British were forced to evacuated southern New Jersey. The battle was the last significant action of Washington’s winter New Jersey campaign.

“An entire State was wrested from the hands of a victorious enemy, superior in numbers, in arms and discipline, by the wisdom, activity, and energy of one great mind.”
– John Trumbull, about Washington