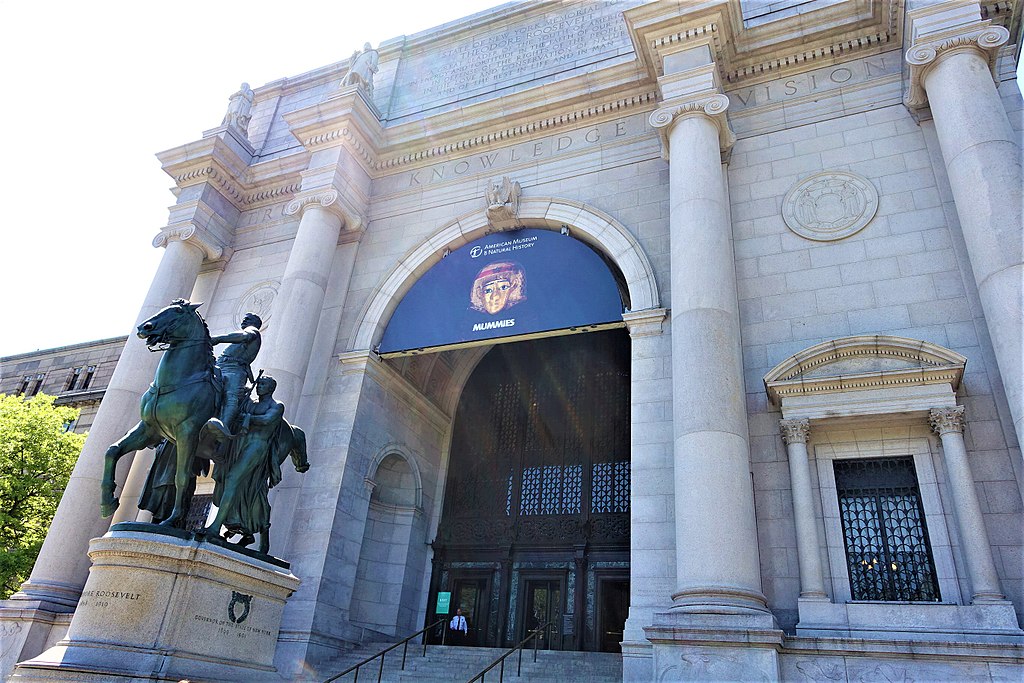 The American Museum of Natural History is one of the largest museums in the world comprises 28 interconnected buildings housing 45 permanent exhibition halls, in addition to a planetarium and a library.

The museum collections contain over 33 million objects, of which only a small fraction can be displayed at any given time.

The mission of the American Museum of Natural History is: “To discover, interpret, and disseminate—through scientific research and education—knowledge about human cultures, the natural world, and the universe.”

A Virtual Tour of the American Museum of Natural History, New York

Highlights of the American Museum of Natural History

The Willamette Meteorite is an iron-nickel meteorite and the most massive meteorite found in North America and the sixth-largest in the world.

There was no impact crater at the discovery site. Scientists believe the meteor landed elsewhere and was transported during a glacial period at the end of the last Ice Age, 13,000 years ago.

The “Gobi Flag” is an artifact of the Museum’s 1920s expedition to the Gobi Desert. The expedition leader was Roy Chapman Andrews (1884 – 1960), who was an American explorer, adventurer, and naturalist who later became the director of the American Museum of Natural History.

The expedition made significant discoveries and brought the first-known fossil dinosaur eggs to the museum.

This Stick Chart for Sea Navigation made of split reed and cowrie shells were used by Pacific Islanders to help navigate their ocean. The cowrie shells represent stars in the constellations.

The three shells in the pointed oval at the bottom right represent the boat. The sailors placed the chart over their heads at night, and by orienting the map to match the position of the constellations, they determined their desired direction.

This chart was used to determine the direction of travel and similarly for their return home.

Master navigators once used Navigation Charts like this one from the Marshall Islands for navigation between the islands by showing currents and wave patterns.

These types of Stick Charts were made to represent significant ocean swell patterns and the ways the islands disrupted those patterns. Island locations were represented by shells tied to the framework, or by the lashed junction of two or more sticks.

This Ammonite shell is a marine animal that went extinct about 65 million years ago. The shell colorization is only found in ammonites from Alberta, Canada.

Originally the ammonite shell was made of aragonite, which is the same material as which pearls are made. Over millions of years, this animal shell was subject to significant temperatures and pressures and was transformed into a gemstone.

It was recognized as a gemstone in 1981 by the World Jewelry Confederation and named Ammolite. Only three types of gems are made by living organisms, this one plus amber and pearls.

A History of Planetariums – American Museum of Natural History

The American Museum of Natural History

Amazing American Museum of Natural History in New York / From the Movie: Night at the Museum

The Known Universe by AMNH

“The modern world thinks of art as very important: something close to the meaning of life.”
– Alain de Botton