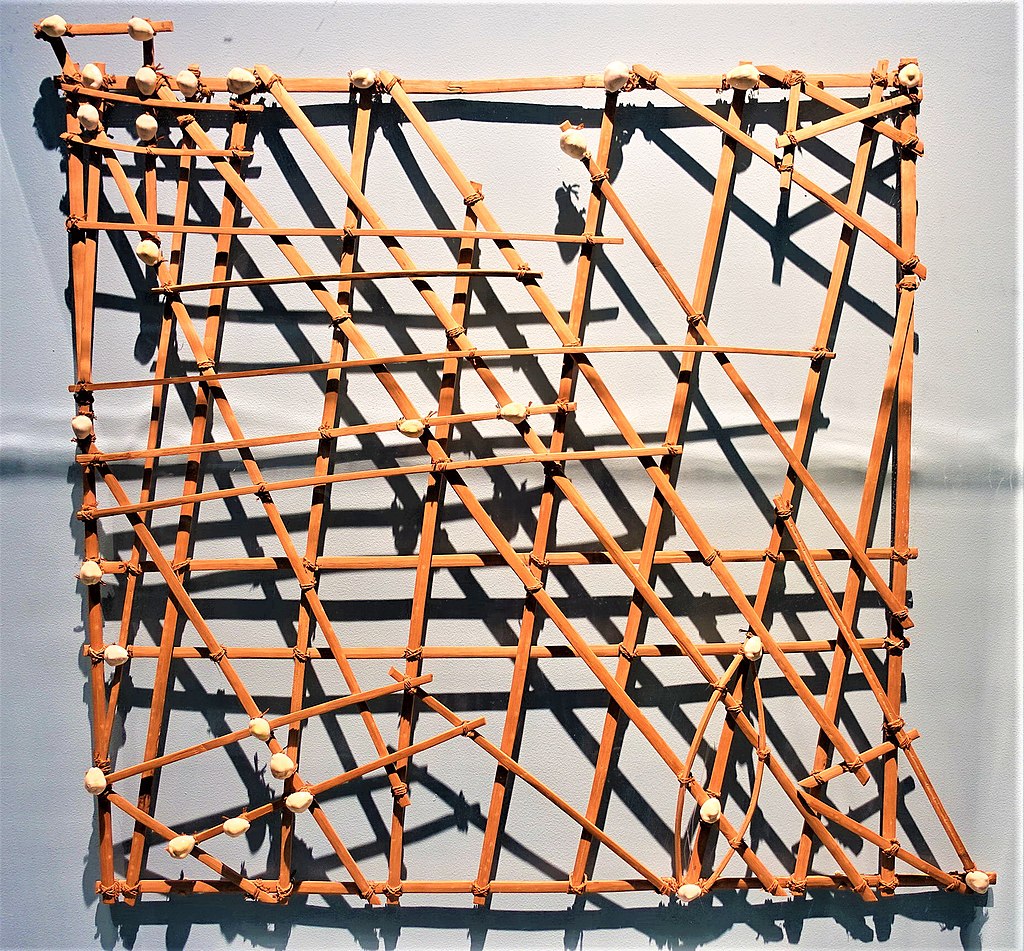 This Stick Chart for Sea Navigation made of split reed and cowrie shells were used by Pacific Islanders to help navigate their ocean. The cowrie shells represent stars in the constellations.

The three shells in the pointed oval at the bottom right represent the boat. The sailors placed the chart over their heads at night, and by orienting the map to match the position of the constellations, they determined their desired direction.

This chart was used to determine the direction of travel and similarly for their return home.

These types of Stick Charts were used across the Pacific Islands, and each chart varied so much in form and interpretation that the individual navigator who made the map was sometimes the only person who could fully interpret and use it.

The use of stick charts ended after World War II when new electronic technologies made navigation more accessible and traveled among islands by canoe lessened.

Stick Charts were also made to represent significant ocean swell patterns and the ways the islands disrupted those patterns.

Island locations were represented by shells tied to the framework, or by the lashed junction of two or more sticks.

This Stick Chart comes from Saipan, Mariana Islands. The indigenous inhabitants were the Chamorro people.

Archaeologists believe that the people who first settled the Marianas arrived there after making what may have been at the time the longest uninterrupted ocean voyage in human history.

Archaeologists report that recent discoveries suggested that Tinian, one of the principal islands of the Mariana Islands, is likely to have been the first island in Oceania to have been settled by humans.

Stick charts were made by various Polynesian cultures to navigate the Pacific Ocean by canoe either by mapping wave patterns or star patterns.

The charts either represented significant ocean swell patterns and the ways the islands disrupted those patterns, typically determined by sensing disruptions in ocean swells by islands during sea navigation.

Stick Charts are also created to represent the stars or constellations in the night sky.

Most stick charts were made from coconut fibers that were tied together to form an open framework. Shells tied to the structure represented Island locations.

Different categories of Stick Charts were used for instruction and teaching principles of navigation and as maps of island positions relative to ocean swells and the stars.

The Mariana Islands are a crescent-shaped archipelago comprising the summits of fifteen mostly dormant volcanic mountains in the western North Pacific Ocean.

They lie south-southeast of Japan and east of the Philippines, in northwestern  Micronesia.

They are politically divided into two jurisdictions of the United States: the Commonwealth of the Northern Mariana Islands and, at the southern end of the chain, the territory of Guam.

Spanish expeditions in the 16th century were the first Europeans to arrive. Spain then annexed and colonized the archipelago, establishing their capital on the largest island, Guam.