The Brooklyn Museum has a good collection of John Singer Sargent  Paintings. He was an American expatriate artist who created about 900 oil paintings and more than 2,000 watercolors, as well as countless sketches and charcoal drawings.

His body of work documents worldwide travels, from Venice to the Tyrol, Corfu, the Middle East, Montana, Maine, and Florida.

Sargent made extensive tours to the Middle East and North Africa, where he painted many Bedouin scenes. In Bedouin Camp, Sargent used undiluted watercolors straight from the tube.

He also bulked colors with the addition of white zinc paint, as can be seen in the buildup and cracking of paint in the face and turban of the squatting Bedouin at the lower right.

The Bedouin are a grouping of nomadic Arab people who have historically inhabited the desert regions in North Africa, the Arabian Peninsula, Iraq, and the Levant.

The English word bedouin comes from the Arabic word for “desert-dweller.” Their traditions include the Bedouin tents depicted in this painting.

In the late 19th century, many Bedouin began the transition to a semi-nomadic lifestyle. One of the factors was the influence of the Ottoman empire authorities, who viewed the Bedouin as a threat to the state’s control.

This painting captures the image many Westerners associate with the Bedouins, who fought against the Ottomans.

Arab Gypsies in a Tent

With his Bedouin series, Sargent used the expressive power of the robed figures animated by intense piercing light.

He used the tents as a background framework to focus on the composition. In this watercolor of “Arab Gypsies in a Tent” features a hooded Gypsy, whose hands are brilliantly portrayed over the round shape of a tray.

In art history, Orientalism is the depiction usually done by artists from the West depicting subjects of “the Middle East.”

Art historians tend to classify two broad types of Orientalist artists: the realists who carefully painted what they observed and those who imagined Orientalist scenes without ever leaving the studio.

These Sargent watercolors are romanticized orientalist narratives. He created them during his travels to the Middle East and North Africa during 1905 – 1906.

“Arab Gypsies in a Tent” by John Singer Sargent 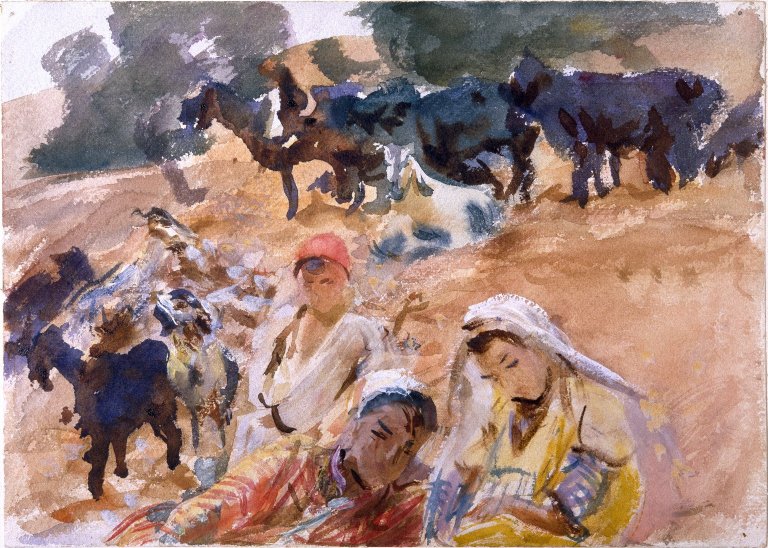 “Goatherds” was completed nearby Mount Tabor and the Plain of Esdraelon and goatherds with their herd.

Sargent visited the region of the Sea of Galilee, in Syria researching for his plan to execute a painting of the Sermon on the Mount for the Boston Public Library mural cycle.

This depiction was rendered in a palette to reflect the bright outside light. The Bedouin subjects in their tents have a very different light.

The Bridge of Sighs

The Bridge of Sighs depicts a bridge located in Venice, Italy. The enclosed bridge is made of white limestone, has windows with stone bars, passes over the Rio di Palazzo, and connects the New Prison to the interrogation rooms in the Doge’s Palace.

It was built in 1600 and was named by Lord Byron in the 19th century based on the suggestion that prisoners would sigh at their last view of beautiful Venice through the window before being taken down to their cells.

In this beautiful watercolor, we can see Sargent’s use of multiple techniques to create light and highlights in his works:

“The Bridge of Sighs” by John Singer Sargent 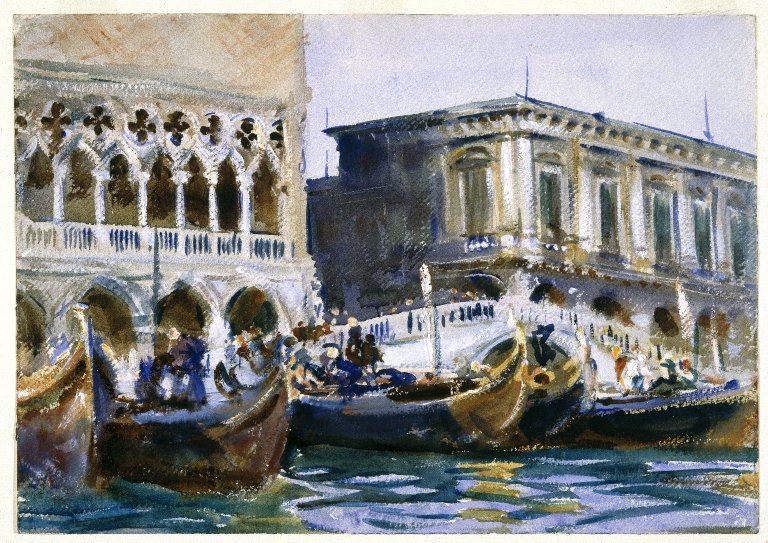 John Singer Sargent created hundreds of watercolors of Venice, and they are especially notable when done from the perspective of a gondola as this depiction has been made.

His colors were vivid and conveyed the feeling of a dream. During Sargent’s long career, every destination offered visual stimulation and treasure. Even on his holidays and travels, he painted with feverish intensity, often painting from morning until night.

La Riva captures the spirit of Venice with Doge’s Palace on the left and the Palazzo Delle Prigionii on the right connect with the Ponte della Paglia bridge.

The gondolas dominate the foreground with Sargent’s perspective is from a gondola on the Grand Canal. Venice has a rich and diverse architectural style, the most prominent of which is the Gothic style.

Venetian Gothic architecture is a term given to a Venetian building style combining the Gothic lancet arch with the curved ogee arch, due to Byzantine and Ottoman influences. The city also has several Renaissance and Baroque buildings.

He created over 900 oil paintings and more than 2,000 watercolors, as well as many sketches and drawings.

He also traveled extensively across Europe, the Middle East, and the United States. Many of John Singer Sargent portraits, which can be found in museums across the world, depict society’s leading lights and the luxury of their time.

Sargent’s Watercolors: Making the Best of an Emergency