“The Peaceable Kingdom” by Edward Hicks at the Brooklyn Museum is one of over 60 versions of this scene painted by Hicks. Although not a religious image, it shows Hicks’ Quaker ideals.

This painting is his interpretations of Isaiah’s biblical prophecy of a peaceable kingdom, in which benign animals and trusting infants coexist in an Eden-type setting.

The idea of the animals and children is taken from a passage in Isaiah, from the Bible. Hicks used his paintings as a way to define his central interest and belief.

In the background, William Penn executes his treaty with the Native Americans, representing the earthly realization of a peaceable kingdom.

This painting shows Hicks’ concept of working and living together in peace with depictions of Native Americans meeting peacefully with the settlers of Pennsylvania, with William Penn prominent among them.

Hicks’ work was influenced by a specific Quaker belief referred to as the Inner Light. The Inner Light reflected the “Christ in You” concept, which was derived from the Bible.

Hicks depicted humans and animals as representing the Inner Light’s idea of breaking physical barriers of difference between people to work and live together in peace. Calmness and peace characterize Hicks’ compositions.

Many of the shapes and forms in his work seem to be organic, flowing, and soft. In “Peaceable Kingdom,” many of the colors have the same warm tone.

Hicks tries to convey uniformity and peace. Most of these paintings are asymmetrically balanced, to reflect actions taking place between groups of people and animals within the work.

None of Hicks’ paintings is entirely the same; he uses small detail variations as a way to urge viewers to pay attention to specific content.

Hicks invested particular emphasis in the gestures of people and animals in his paintings to communicate his meaning. Hicks made 62 known versions of the Peaceable Kingdom.

Many of them can be seen in museums such as The Brooklyn Museum, the Philadelphia Museum of Art, the De Young Museum, San Francisco, and the National Gallery of Art, Washington, D.C. 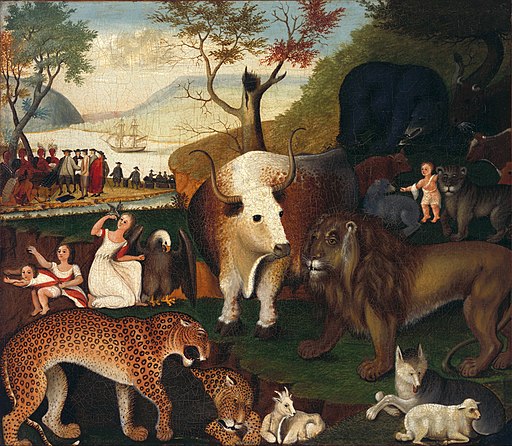 “The wolf shall dwell with the lamb, and the leopard shall lie down with the young goat, and the calf and the lion and the fattened calf together; and a little child shall lead them.

The cow and the bear shall graze; their young shall lie down together, and the lion shall eat straw like the ox. The nursing child shall play over the hole of the cobra, and the weaned child shall put his hand on the adder’s den.

They shall not hurt or destroy in all my holy mountain; for the earth shall be full of the knowledge of the Lord as the waters cover the sea.”

Quakers were known for their refusal to take part in the war, plain dress, refusal to swear oaths, opposition to slavery, and teetotalism.

Some Quakers founded banks and financial institutions, including Barclays, Lloyds, and the big three British confectionery makers Cadbury, Rowntree, and Fry. Quaker beliefs prohibited an abundant life or having excessive quantities of objects.

William Penn (1644 – 1718) was an early Quaker and founder of the English North American colony of Pennsylvania.

He was an early advocate of democracy and religious freedom, notable for his good relations and successful treaties with the Lenape Native Americans. Under his direction, the city of Philadelphia was planned and developed.

Penn was a man of deep religious convictions; he wrote many works in which he urged believers to adhere to the spirit of Primitive Christianity.

He was imprisoned several times in the Tower of London due to his faith. 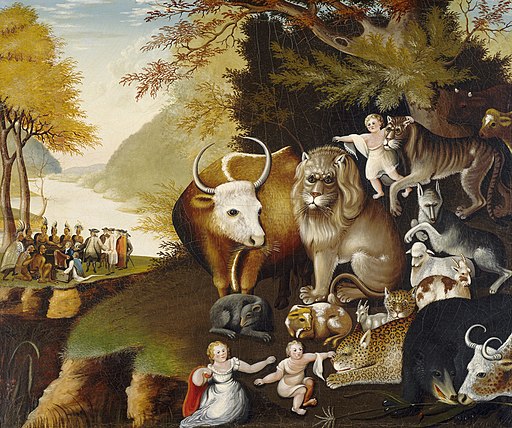 About 1820 Edward Hicks began to make paintings, using his previous work experience as a painter of coaches, houses, and signs to produce devotional images.

“The Peaceable Kingdom” by Edward Hicks