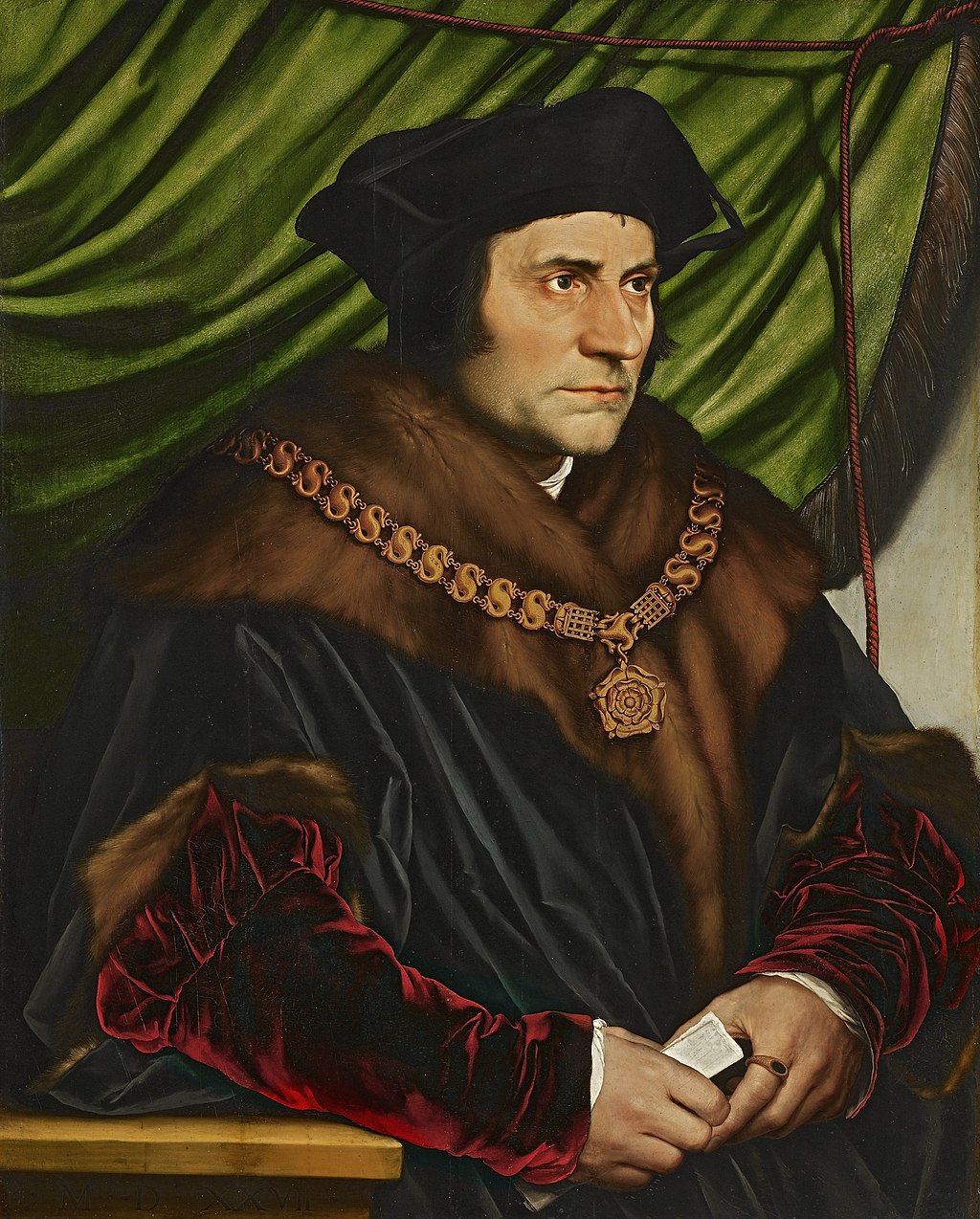 “Sir Thomas More” by Hans Holbein the Younger, was created soon after Holbein arrived in London. Holbein’s friend, the Dutch humanist Desiderius Erasmus, recommended that Holbein befriend More, who was then a powerful, knighted speaker at the English Parliament.

The Soviet Union honored him for his attitude toward property rights expressed in his book Utopia, which is about the political system of an imaginary, ideal island nation, published in 1516

More opposed the Protestant Reformation. He also opposed the king’s separation from the Catholic Church, refusing to acknowledge King Henry VIII as Supreme Head of the Church of England and the annulment of his marriage to Catherine of Aragon.

After refusing to take the Oath of Supremacy, he was convicted of treason and beheaded. Of his execution, he was reported to have said:

“I die the King’s good servant, and God’s first.”

This portrait is closely related to drawings in the Royal Collection, and there is a copy of this painting in the National Portrait Gallery.

Another Holbein portrait of More, part of a large group portrait of his family, is now lost, but several drawings copies survive.

Sir Thomas More’s execution took place in 1535. On the scaffold, More recited the Miserere, Psalm 51 in which God’s mercy is sought.

While kneeling, the executioner begged his pardon, More rose, kissed him, and gave him forgiveness. His headless body was buried at the Tower of London, in an unmarked grave.

His head was fixed upon a pike over London Bridge for a month, according to the custom for traitors.

“Have mercy upon me, O God, according to thy lovingkindness:
according unto the multitude of thy tender mercies blot out my transgressions.
Wash me thoroughly from mine iniquity, and cleanse me from my sin.
For I acknowledge my transgressions: and my sin is ever before me.”

The 51st psalm of the Book of Psalms is traditionally known as the Miserere, especially in musical settings. Psalm 51 is one of the Penitential Psalms, composed by David as a confession to God after he sinned with Bathsheba.

The psalm is a regular part of Jewish, Catholic, Eastern Orthodox, and Protestant liturgies. It is the most often quoted psalm in the Eastern Orthodox and Byzantine Catholic Churches: “Have mercy upon me, O God.”

Holbein traveled to England in 1526 and was welcomed into the humanist circle of Thomas More, where he quickly built a high reputation.