The Intrepid Sea, Air, and Space Museum is a military and maritime history museum at Pier 86 on the West Side of Manhattan. The museum opened in 1982 after the USS Intrepid was saved from scrapping. Later, the Intrepid became a National Historic Landmark in 1986. In 1988, the museum was awarded USS Growler, a Grayback-class submarine, which carried nuclear missiles by the United States Congress from the United States Navy and is now on display and available for tours. In 2011, ownership of the Space Shuttle Enterprise was transferred to the Intrepid Sea, Air & Space Museum.

The Intrepid Sea, Air & Space Museum is a nonprofit institution featuring the world’s fastest jets and a guided-missile submarine. The Museum exhibitions and collection feature the technologically advanced aircraft and vessels highlighting innovation and bravery. During 2001, the Intrepid served as temporary field headquarters for the Federal Bureau of Investigation as it began its investigation of the September 11 attacks.

A Tour of the Museum of the Intrepid, Sea, Air & Space Museum

The Grumman F-14 Tomcat is a supersonic, twin-engine, two-seat, variable-sweep wing fighter aircraft. The F-14 was the first of the American fighters, which were designed incorporating air combat experience against MiG fighters during the Vietnam War. 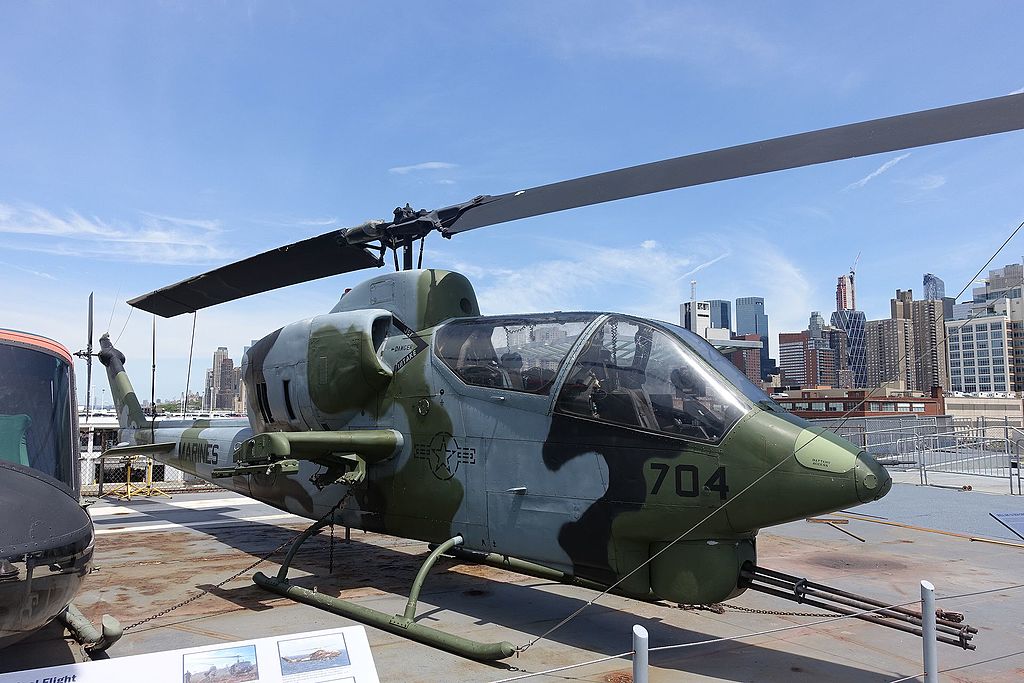 The Bell AH-1J Sea Cobra is a twin-engine attack helicopter which made its combat debut during the Vietnam War (1955 – 1975). The Cobra range is part of the larger Huey family.

The Sea Cobra on display is a veteran of Operation Desert Storm. It had a crew of two, a pilot and a gunner.

The Bell AH-1 SuperCobra is a twin-engine attack helicopter that is part of the larger Huey family, which includes the SeaCobra and the SuperCobra. The SuperCobra helicopter fleet is being replaced by the next generation Bell AH-1Z Viper. The AH-1 Cobra was developed in the mid-1960s as an interim gunship for the U.S. Army for use during the Vietnam War. The Cobra shared the proven transmission, rotor system, and the turboshaft engine of the “Huey.”

During the Gulf War (August 1990 –  February 1991), Marine SuperCobras were deployed and flew a total of 1,273 sorties in Iraq. The AH-1W units were credited with destroying 97 tanks, 104 armored personnel carriers and vehicles, and two anti-aircraft artillery sites during the 100-hour ground campaign. USMC Cobras also served in Afghanistan and the conflict in Iraq.

The Bell UH-1 Iroquois, nicknamed “Huey,” was a utility military helicopter that was developed to meet a United States Army’s need for a medical evacuation and utility helicopter and first flew in 1956.

The Iroquois was originally designated HU-1, hence the Huey nickname, which has remained in common use. The UH-1 first saw service in combat operations during the Vietnam War, with around 7,000 helicopters deployed.

The McDonnell F3H-2N (F-3B) Demon was a subsonic swept-wing U.S. Navy carrier-based jet fighter aircraft. It was withdrawn before it could serve in Vietnam.

The McDonnell F3H-2N (F-3B) Demon was designed to counter Russian MiG-15s and MiG-17s. Designed as a cannon and missile-carrying fighter, the aircraft’s large wings, with power-operated slats aided in providing lift at low speed, and give it smooth handling at high altitudes as well a good response during landings on carriers.

The Grumman E-1 Tracer was the first purpose-built airborne early warning aircraft used by the U.S. Navy. Tracers were deployed on the “Intrepid” for operations off the coast of Vietnam.

Flying above a carrier task force, the Tracer and its crew of four provided an electronic bird’s eye view of the airspace. The radar capability of the Tracer extended the view of the task force many hundreds of miles over the horizon.

The Tracer served aboard the “Intrepid” until the ship’s retirement in 1974. The most distinctive feature of this airplane was the radome, the aerodynamic structure over the plane. The radome covered a dish-type radar system that had a search radius of 250 miles or 402 km.

The Grumman F-11 Tiger was a supersonic, single-seat carrier-based U.S. Navy fighter aircraft. It featured a thin wing, fuselage-side intakes, a low-mounted tailplane, and an afterburning engine. The special fuselage shape was designed to reduce transonic and supersonic drag.

The Grumman F9F Cougar was an aircraft carrier-based fighter aircraft for the U.S. Navy and US Marine Corps. The F9F was known to be highly maneuverable and easy to fly.

The Lockheed A-12 was a reconnaissance aircraft built for the CIA by Lockheed’s Skunk Works. The plane was designated A-12, the 12th in a series for “Archangel,” the aircraft’s internal code name. The CIA selected Lockheed because it had produced the U-2 had experience running a “black” project.

The A-12 was produced from 1962 and flew until 1968. The program was officially revealed in the mid-1990s. It was the precursor to the SR-71 Blackbird, a slightly longer variant able to carry a heavier fuel and camera load.  The crews named the A-12 the Cygnus to follow the Lockheed practice of naming aircraft after celestial bodies. 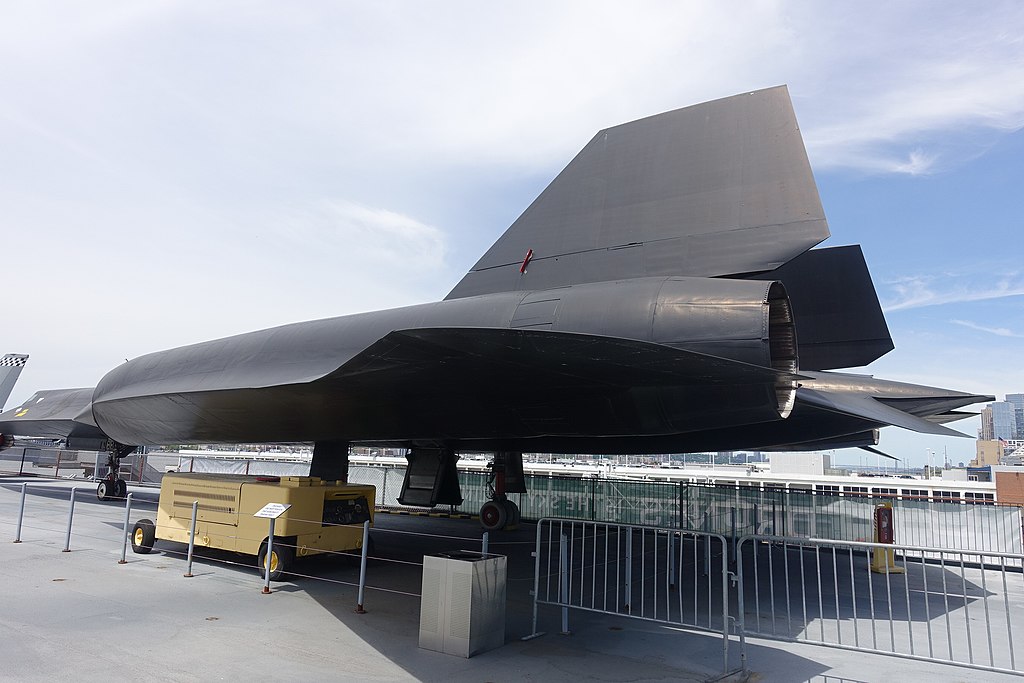 Before the A-12, titanium was used only in small parts directly related to supporting, cooling, or shaping high-temperature areas on aircraft like those subject to the highest kinetic heating from the airstream, such as wing leading edges. The A-12, however, was constructed mainly of titanium. Titanium is quite rigid and difficult to machine, which made it difficult to form into curves given available techniques. The solution was found by machining only small “fillets” of the material with the required shape and then gluing them onto the underlying framework, which was more linear.

Although initially designed to succeed the U-2 in overflights over the Soviet Union and Cuba, the A-12 was never used for either role. After a U-2 was shot down in 1960, the Soviet Union was considered too dangerous to overfly except in an emergency, and overflights were no longer necessary, thanks to reconnaissance satellites.

The CIA decided to deploy some A-12s to Asia, and it began Operation Black Shield operations over North Vietnam, photographing surface-to-air missile (SAM) sites, flying at 80,000 ft (24,000 m), and at about Mach 3.1. During 1967, the A-12s carried out 22 sorties in support of the Vietnam War. During 1968 further Black Shield operations were conducted in Vietnam. Sorties were also carried out during the Pueblo Crisis with North Korea. Six of the 15 A-12s were lost in accidents, with the loss of two pilots and one engineer.

The Space Shuttle system was composed of an orbiter launched with two reusable solid rocket boosters and a disposable external fuel tank. It was capable of carrying up to eight astronauts and up to 50,000 lb (23,000 kg) of payload into low Earth orbit (LEO). When its mission was complete, the orbiter would re-enter the Earth’s atmosphere and land like a glider. 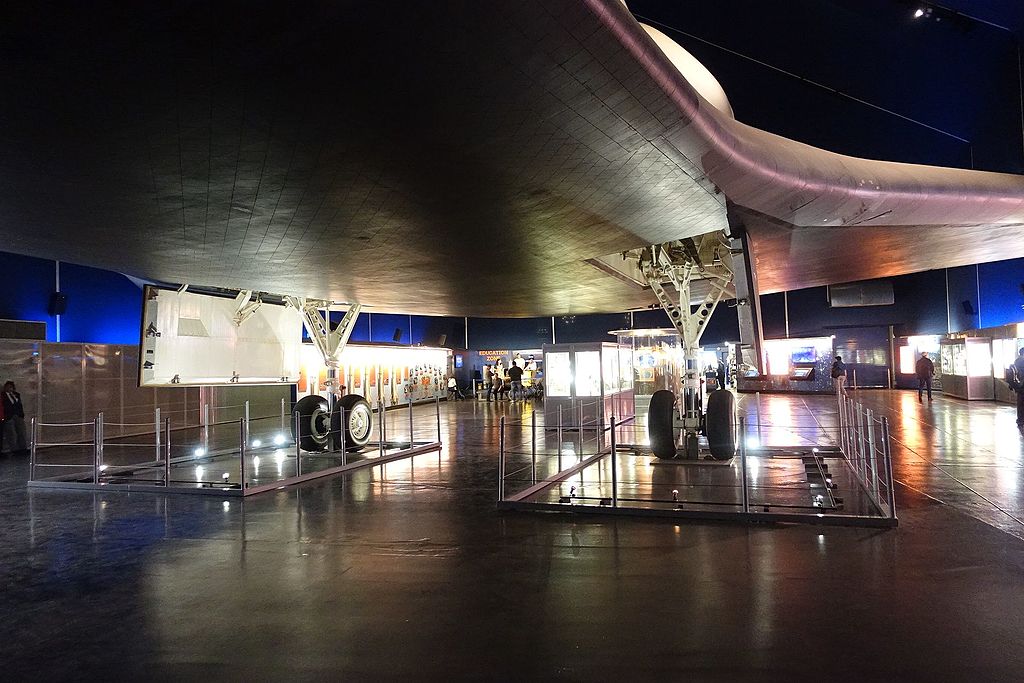 The Enterprise, as the first experimental orbiter, was a high-altitude glider launched from the back of a specially modified Boeing 747, only for initial atmospheric landing tests (ALT). Enterprise’s first test flight was in 1977, five years after the Shuttle program was initiated. This led to the launch of the first space-worthy shuttle Columbia in 1981. The Space Shuttle program finished with its last mission, flown by Atlantis, in 2011.

“Enterprise,” was initially to be named “Constitution” to honor the Constitution of the United States. However, “Star Trek” fans started a massive write-in campaign urging the White House to name the first of the Space Shuttle after the original starship “USS Enterprise” from the “Star Trek” T.V. series.  Then-president Gerald Ford got tens of thousands of these letters. Following this campaign, President Gerald Ford directed NASA officials to change the name, saying he was “partial to the name” Enterprise. 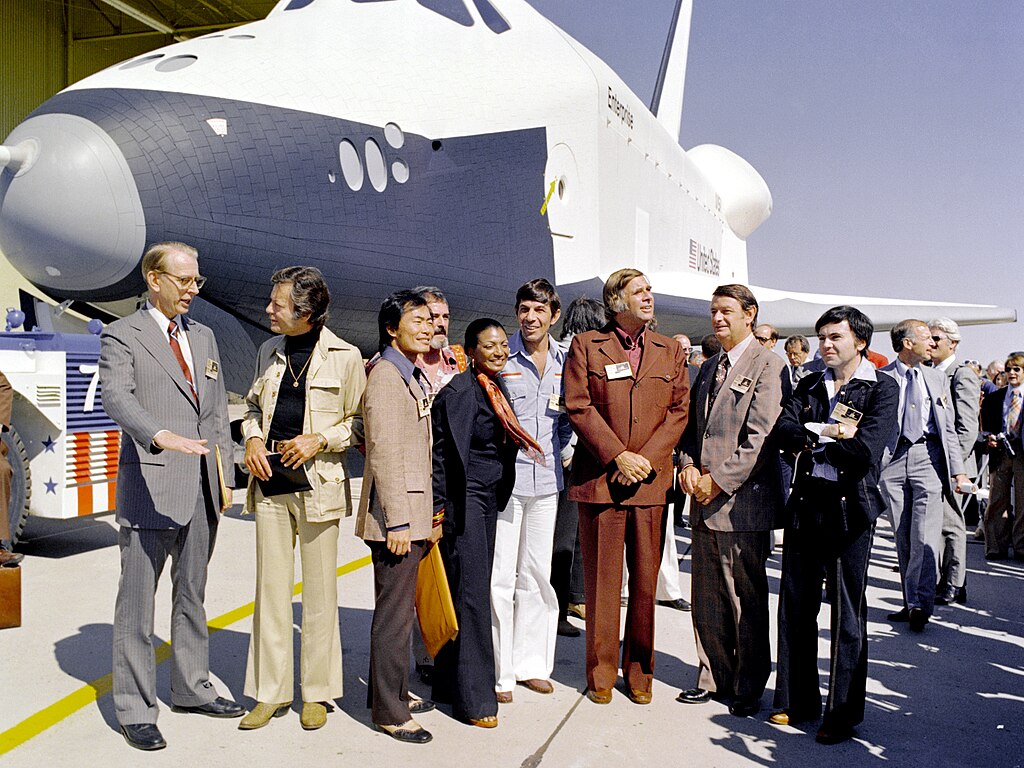 Most aircraft require long runways or an aircraft carrier’s powerful catapults to get airborne. This British-designed Harrier “Jump Jet” used vectored-thrust technology to take-off and land vertically. The British Aerospace Harrier was capable of vertical or short takeoff and landing (V/STOL).

The first Harrier flew for the British Royal Navy (R.N.) in 1967 and saw combat during the Falkland War in 1982. The Harrier II participated in numerous conflicts, making significant contributions in combat theatres such as Kosovo, Iraq, and Afghanistan.

The US Marine Corps realized the Harrier’s potential and purchased Harriers from Britain in 1970 -71. The aircraft in the picture above was part of the Marine Corps original order of Harrier Mk Is. It was upgraded with more powerful engines and electronics and designated A.V. – 8C.

The McDonnell Douglas (now Boeing) AV-8B Harrier II was a single-engine ground-attack aircraft that was the second generation of the Harrier Jump Jet family. The AV-8B was used by the United States Marine Corps (USMC), the Spanish Navy, and the Italian Navy. 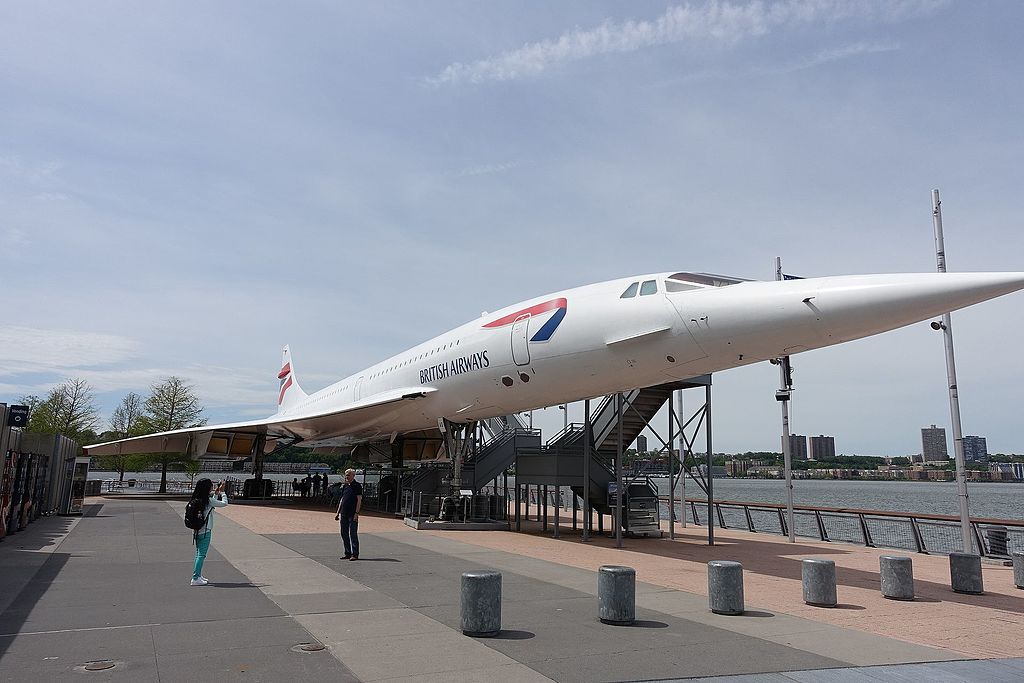 First flown in 1969, Concorde entered commercial service in 1976 and continued flying for 27 years. It is one of only two supersonic transports to have been operated commercially. The only other SuperSonic Transport was the Soviet-built Tupolev Tu-144.

The development of the Concorde was made with many technological breakthroughs, jointly by Sud and the British Aircraft Corporation under an Anglo-French treaty. Only twenty aircraft were built as only Air France and British Airways purchased and flew the Concorde. The aircraft was used by wealthy passengers who could afford to pay a high price for Concorde’s speed and luxury service. It flew its scheduled routes in less than half the time of other airliners.

As aircraft development evolved, subsonic aircraft with larger capacity and more fuel-efficient designs, such as the Airbus A380 and the Boeing 787 Dreamliner was seen as the future. Thus, with the downturn in the commercial aviation industry after the September 11 attacks in 2001, the Concorde operations ceased in 2003. Surviving aircraft were given to museums in Britain, France, and the USA. 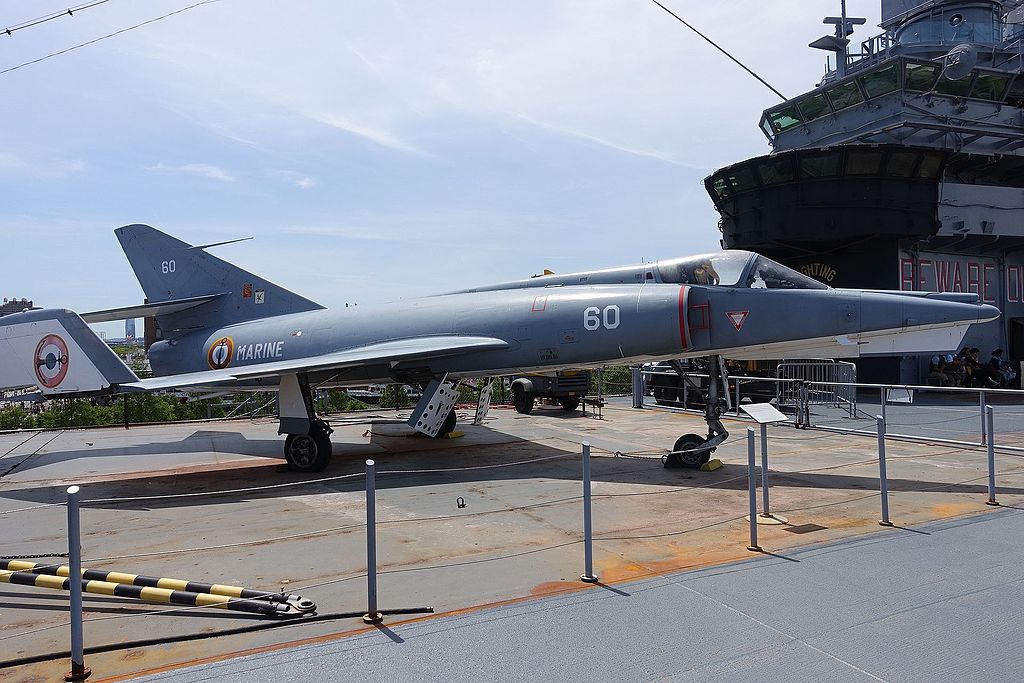 The Dassault Étendard IV was a subsonic carrier-borne strike fighter aircraft. Étendard means battle-standard or battle-flag in French. The “M” stands for the Marine, the French name for Navy. 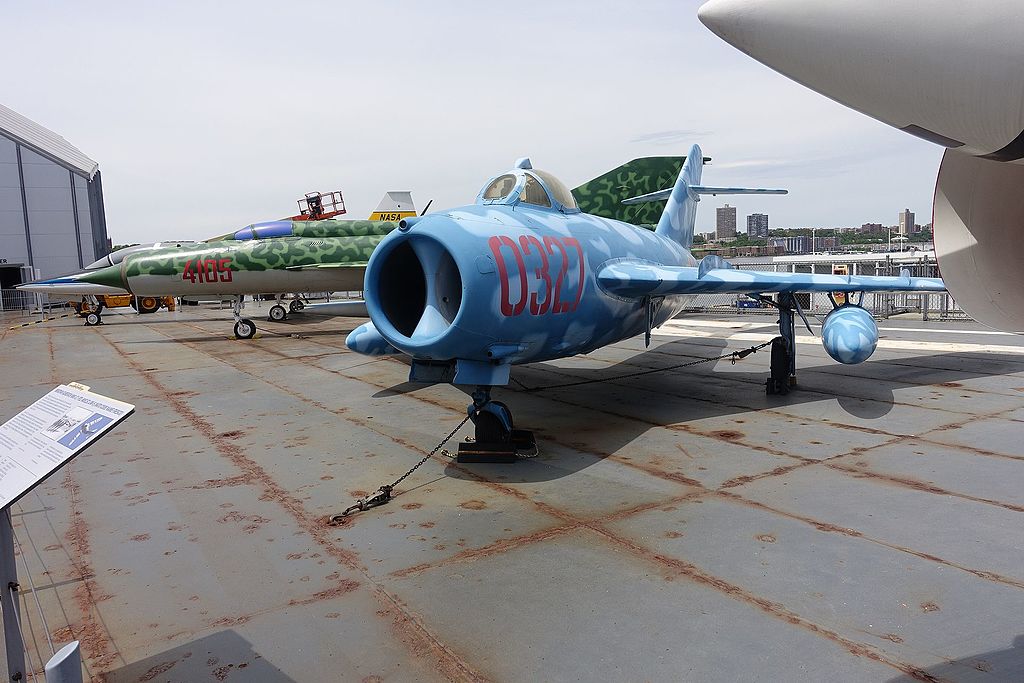 The Mikoyan-Gurevich MiG-17 is a high-subsonic fighter aircraft produced in the USSR from 1952 and operated by numerous air forces in many variations. The MiG-17 built on the success of the Soviet MiG-15 in the Korean War (1950 – 1953).

The MiG-17 proved to be an effective threat against the supersonic fighters of the U.S. in the Vietnam War (1955 – 1975). The MiG-17’s maneuverability and cannon armament proved legendary in Vietnam War dogfights. 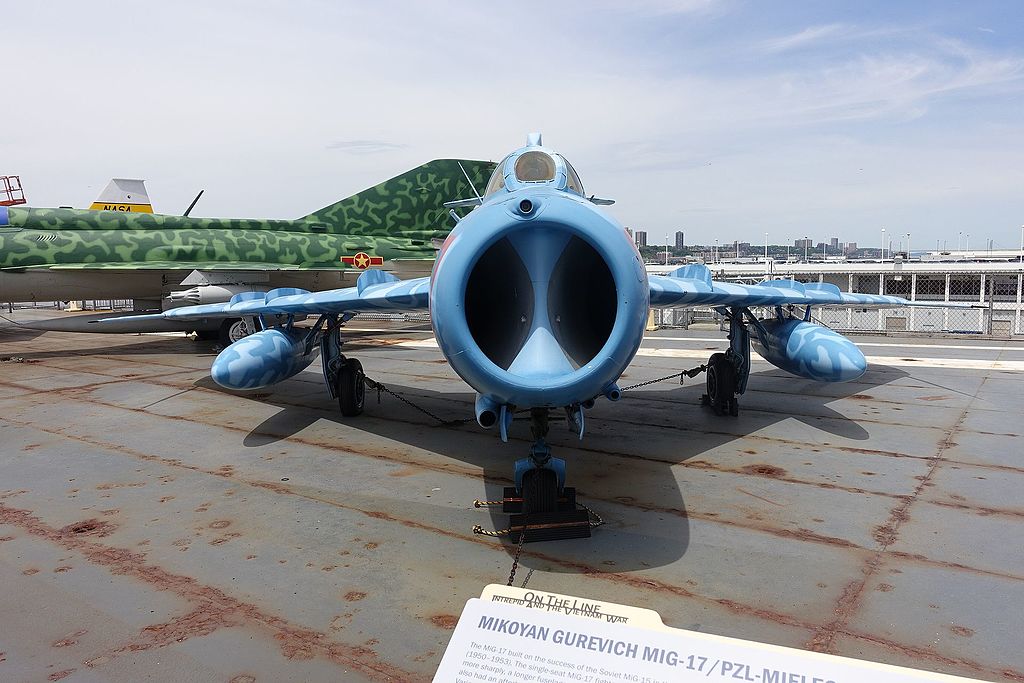 The Lim-5 was a Polish attack aircraft used by the Polish Air Force. It was a variant of the Mikoyan-Gurevich MiG-17. The aircraft on display is the Polish-built PZL-Mielec LIM-5 painted in the camouflage of a MiG-17 of the Vietnamese Air Force.

“We must all hang together, or assuredly we shall all hang separately.”
– Benjamin Franklin