This Anthropomorphic Celtic Sword has a modeled head of a Celtic warrior that terminates the sword handle. The human form of the hilt is designed as a simplified warrior form, which was intended to enhance the power of the bearer.

The face has large almond eyes, and the head has finely drawn hair, nose, and mouth. Below the head, the neck is protected with armor.

This hilt had probably had talismanic significance. As a talisman, this sword held Celtic properties that provide extraordinary power, energy, and benefits to the possessor.

During its life of 2,000 years, the copper alloy scabbard has become amalgamated to the iron blade, affecting parts of the surface. 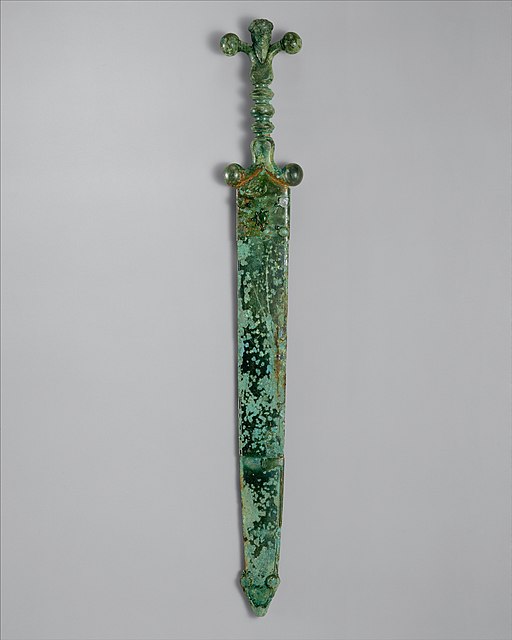 The iron Sword blade has been scabbard amalgamated to the copper Scabbard.

The Celts conquered Europe before he Romans with their Celtic Swords. The ornamentation and quality of this sword demonstrated the technical ability of the Celts.

This type of sword is associated with the La Tène culture, named after the essential Celtic site on Lake Neuchâtel in present-day Switzerland and eastern France.

Other related anthropomorphic swords have been found in France, Ireland, and the British Isles, the major centers of long-term Celtic culture across Europe.

These Sword Belt rings are all that remain of the ancient Celtic leather belt.

Celtic swords symbolized power, strength, honor, and glory in battle. The resources, labor, and skills required to produce such a sword made it extremely expensive and valuable. This sword belonged to an elite warrior or tribal leader.

The sword may have been buried with its owner or thrown in the ocean as a gift to the gods or spirits.

The most common Celtic sword is the “long” sword, which usually has a stylized anthropomorphic hilt. These swords also often had an iron plate in front of the guard that was shaped to match the scabbard mouth.

The second type of Celtic sword was a “short” sword with either an abstract or an anthropomorphic hilt of copper alloy.

Scabbards were generally made from two plates of iron, and suspended from a belt made of iron links. Some scabbards had front plates of bronze rather than iron.

Swords made of iron as opposed to bronze appear from the Early Iron Age about 12th century BC, but do not become widespread before the 8th century BC.

Early Iron Age swords were work-hardened, rather than quench-hardened, which made them only slightly better in terms of strength and hardness to earlier bronze swords.

Eventually, smiths learned that by adding an amount of carbon during smelting in the form of charcoal to the iron, they could produce an improved alloy now known as steel.

By quenching and tempering, swords could be made that would suffer much less damage and would spring back into shape if bent.

It took a long time, and even until the end of the early medieval period, many swords were still unhardened iron.

The Celts are a collection of peoples of Europe identified by their use of the Celtic languages and other cultural similarities.

By the later La Tène period from about 450 BC to the Roman conquest, the Celtic culture had expanded to the following regions:

By the mid-1st millennium, with the expansion of the Roman Empire and migrating Germanic tribes, the Celtic culture and Insular Celtic languages had become more restricted.

Strongholds of Celtic culture included Ireland, the western and northern parts of Great Britain (Wales, Scotland, and Cornwall), the Isle of Man, and Brittany.

Between the 5th and 8th centuries, the Celtic-speaking communities in these Atlantic regions emerged as a reasonably cohesive cultural entity.

By the 6th century, however, the Continental Celtic languages were no longer in extensive use.

The Insular Celtic culture diversified into that of the Gaels and the Celtic Britons of the medieval and modern periods.

The Celts – In the Beginning

The Celts – Heroes in Defeat

“Under the shelter of each other, people survive.”
– Celtic Quote