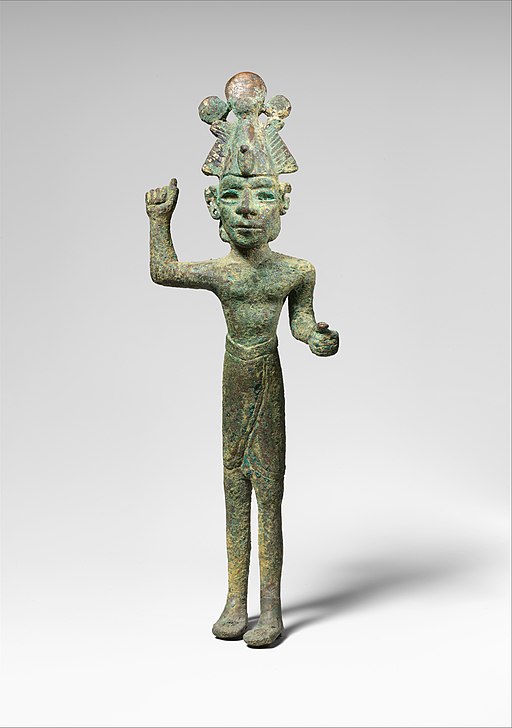 This statuette of an attacking deity shows him striding forward with one foot in front of the other. The smiting god holds one of his arms raised, and the other held out.

In his original state, the hands would have wielded weapons such as a spear and mace or thunderbolt. And his pierced ears would have been adorned with earrings of gold.

This smiting god figure was found in the Levant and originated from the Canaanite culture; however, he is clad in an Egyptian-style kilt.

Also, the crown has the distinctive Egyptian Atef Crown of Osiris, worn by the pharaohs. However, the figure is not an Egyptian king but an ancient Canaanite local deity from the Levant area.

Egyptian art and culture had a significant influence on the art of the Levant during the Late Bronze Age. While Egyptian styles may have been copied, their local meaning was different and adapted to the local deity’s mythology.

This “Egyptianizing” style on statues of local gods has been found in several other areas in the Near East.

The Late Bronze Age was a time of significant wide-spread economic, political, and cultural connections. The result was that artistic elements of a variety of cultures were incorporated into local styles.

Canaanite religion refers to the group of ancient Semitic religions practiced by the Canaanites living in the ancient Levant from at least the early Bronze Age. Canaanite religion was polytheistic and, in some cases, monolatristic.

The followers of the Canaanite religion worshiped a high number of deities in a hierarchy headed by El and Asherah.

The Canaanite religion was strongly influenced by their more powerful and populous neighbors and showed an apparent influence of Mesopotamian and Egyptian religious practices.

During the height of Egypt’s power and influence, the Canaanite god Baal became associated with the Egyptian god Set and was considered identical. Iconographically, Baal was at this time shown wearing the crown of Lower Egypt and depicted in the Egyptian-like stance, one foot set before the other.

Atef is the specific feathered white crown of the ancient Egyptian deity Osiris. It combines the Hedjet, the crown of Upper Egypt, with curly red ostrich feathers on each side of the crown for the Osiris cult.

The Atef crown identifies Osiris in ancient Egyptian painting. Osiris, the god of the dead, wears the Atef crown as a symbol of the ruler of the underworld.

The tall, bulbous white piece in the center of the crown is between two ostrich feathers. The feathers represent truth and justice.

In Ancient Egypt, the Bronze Age began about 3150 BC. During the Early Bronze dynasties, the hallmarks of ancient Egyptian civilization, such as art, architecture, and many aspects of religion, took shape.

The Late Bronze Age was the Egyptian Empire’s most prosperous time and was marked the peak of Egypt’s power. During 1292–1069 BC, eleven pharaohs that took the name of Ramesses.

Introduction to Ancient Canaan and the Canaanites

The Ancient Gods – Syria and Canaan

“The only thing that is humiliating is helplessness.”
– Egyptian Proverbs