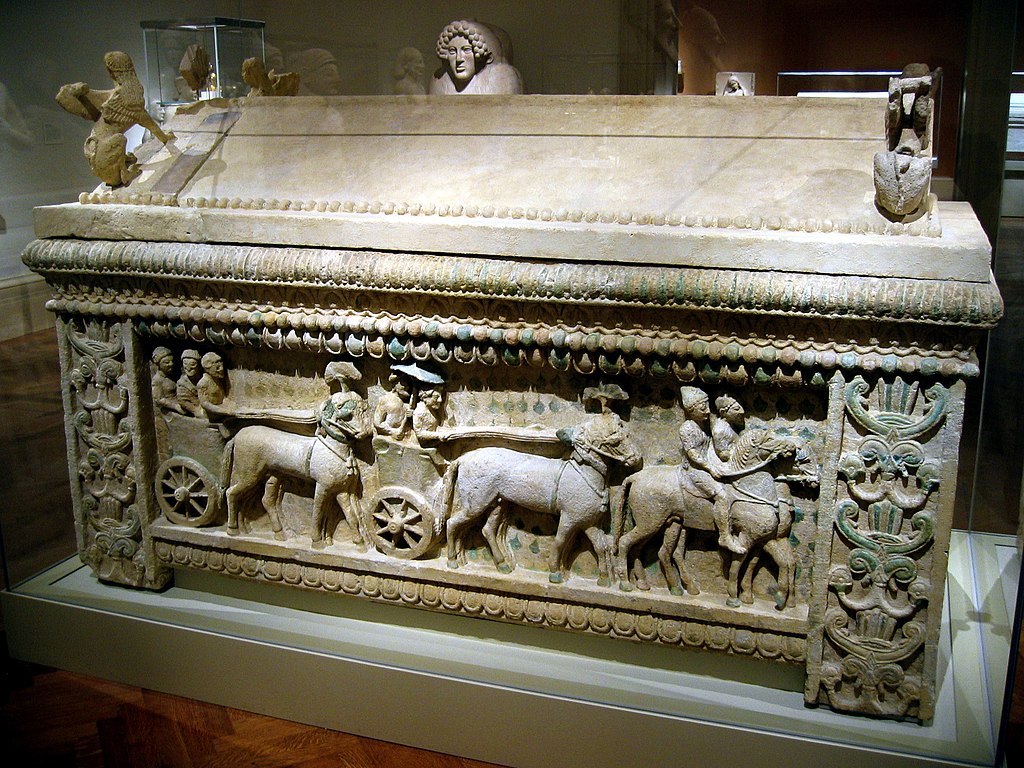 The Amathus Sarcophagus is from Amathus, Cyprus, and once held a king of Amathus. Its sides show procession scenes that typify Cypriot, Greek, and Near Eastern styles of the mid-fifth century BCE.

It is unique for its scale and in the preservation of its preserved coloring. The iconography demonstrates Greek, Cypriot, and Oriental artistic cultures’ merging in the middle fifth century B.C.

The sculptured scenes on the long sides show a procession of chariots escorted by attendants and soldiers. The King is probably the driver, who is standing under a parasol.

The carvings of the sarcophagus’s short ends consist of a row of nude Astarte and Bes figures (ancient Egyptian dwarf god).

The framing panels have various vegetal ornaments, while the gabled lid once featured a pair of sphinxes on each end.

Amathus or Amathous was one of the ancient royal cities of Cyprus until about 300 BC. Some of its impressive remains can be seen today on the southern coast in front of Agios Tychonas, about 24 miles (39 km) west of Larnaca and 6 miles (9.7 km) east of Limassol.

Its ancient cult sanctuary of Aphrodite was the second most important in Cyprus, after Paphos.

Amathus was built on the coastal cliffs with a natural harbor and flourished at an early date.  During the post-Phoenician era of the 8th century BC, a palace was erected.

Also, a port was constructed, which served the trade with the Greeks and the Levantines. Amathus became a prosperous and densely populated kingdom with flourishing agriculture and copper mines.

By the late 300s BC, its political importance ended, but its temple of Adonis and Aphrodite Amathusia remained famous in Roman times.

The epithet Amathusia in Roman poetry attesting to the fame of the city. In the Roman era, Amathus became the capital of one of the four administrative regions of Cyprus.

A sarcophagus is a box-like funeral receptacle for a corpse, most commonly carved in stone and usually displayed above ground. The word “sarcophagus” comes from the Greek words “flesh” and “to eat”; hence sarcophagus means “flesh-eating.”

In Ancient Egypt, a sarcophagus acted like an outer shell. Another style of later Ancient Greek sarcophagus was made from painted pottery. Ancient Roman sarcophagi were sometimes metal or plaster, as well as limestone.

Astarte was the Hellenized form of the Middle Eastern goddess Astoreth (Northwest Semitic), a type of Ishtar (East Semitic), worshipped from the Bronze Age through classical antiquity.

The name is mainly associated with her worship in the ancient Levant among the Canaanites and Phoenicians. The name Astarte is sometimes also applied to her cults in Mesopotamian cultures.

Bes, together with his feminine counterpart Beset, is an Ancient Egyptian deity worshipped as a protector of households. Bes later came to be regarded as the defender of everything good and the enemy of all that is bad.

The cult did not become widespread until the beginning of the New Kingdom. Worship of Bes spread as far north as Syria and later into the Roman and Achaemenid Empires.

In its earliest inception, Bes was represented as a lion rearing up on its hind legs. Later, Bes is often seen as just the head or the face, often worn as amulets. Like many Egyptian gods, the worship of Bes or Beset was exported overseas.

While the female variant had been more popular in Minoan Crete, the male version would prove popular with the Phoenicians and the ancient Cypriots.