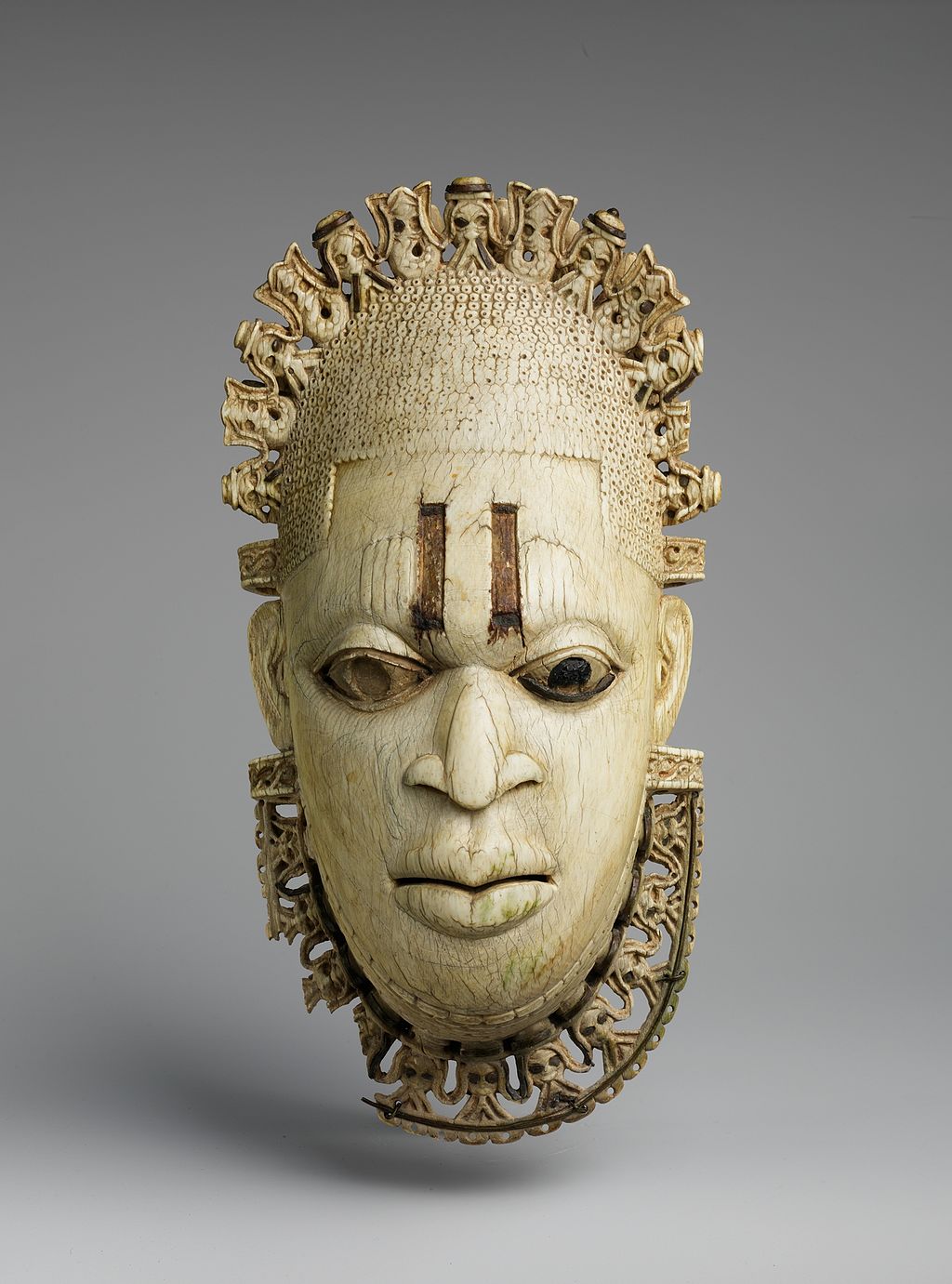 This Benin Ivory Mask is a miniature sculptural portrait of the Queen Mother Idia of the 16th century Benin Empire. The sculpture takes the form of a traditional African mask and features a beaded headdress and choker at her neck. The forehead shows ritual scarification highlighted by iron inlay on the forehead. The mask is framed by the flange of symbolic beings and with heads representing the Portuguese, symbolizing Benin’s alliance with the Europeans. This type of hip-mask was worn by the King, on the hip, during important ceremonies. The mask has double loops at each side for attachment of the pendant.

The mask represents Queen Mother Idia, who was the mother of Esigie, a renowned ruler of the Edo people who ruled in the early 1500s. The Queen Mother played a very significant role in the reign of her son. She was a great warrior who mobilized an army for her son Esigie, who defeated his rival and half-brother to become the 16th king of Benin. His mother, Idia, received much of the credit for these victories. It was her political counsel and her significant influence, which lead to success on the battlefield.

Esigie came to power as Portuguese explorers first made contact with the empire. Trade and diplomacy with Europe brought Esigie, and his kingdom prosperity and influence as his empire traded pepper, ivory, textiles, and slaves for brass, cloth, beads, and mercenaries. Images of the Portuguese continued to appear in Benin art long after their presence in Benin had diminished.

The Kingdom of Benin was a pre-colonial kingdom in what is now southern Nigeria, and its capital was Edo, which is now known as Benin City. The Benin Kingdom was one of the oldest and most highly developed states of West Africa, dating to the eleventh century CE until the British Empire annexed it in 1897.

The British Benin Expedition of 1897 was a punitive expedition by British forces that captured, burned, and looted Benin City, with much of the country’s art and treasures taken as booty. About forty percent of the art was accessioned into the British Museum. Some works were given to members of the Military as spoils of war. The rest was sold to pay for the cost of the British expedition.

The dispersal of the Benin art to museums around the world was a catalyst for the slow European reassessment of the value of West African art. Benin art was copied, and its style integrated into the art of many Western artists.

Benin art from the Kingdom of Benin or Edo Empire (1440–1897), is primarily made of cast bronze and carved ivory.  It was produced mainly for the court of the Oba of Benin, a ruler for whom the craftsmen created a range of ceremonially significant and extraordinary objects. The Western appreciation of Benin art is primarily as works of art. However, its significance is much broader, it also acts as a remarkable historical record. Artifacts and as mnemonic devices to reconstruct history, or as ritual objects.

“One who knows kindness and benevolence,
let them so be kind and helpful.”
– Edo Proverb