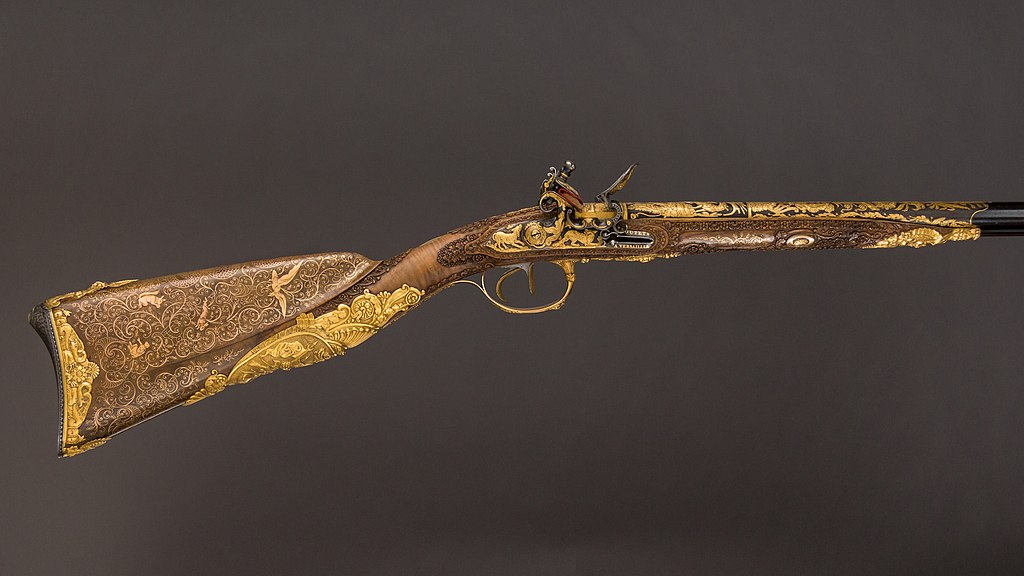 This Double-Barreled Flintlock Shotgun is one of the richest and ornate firearms made after the Restoration of the monarchy in France in 1815. Its decoration is reminiscent of the style fashionable before the French Revolution.

The owner prized this gun so much that he commissioned skilled gun makers to produce a similarly decorated set of barrels and locks using percussion caps, after a more advanced method of ignition were developed.

This shotgun was made by Nicolas-Noël Boutet (1761 – 1833), who was a French gunsmith who was the director of the Versailles state arms factory.

He was “gunmaker-in-ordinary” to King Louis XVI of France, and during the revolution, he worked for Napoleon as director of the state arms manufactory.

Flintlock is a general term for any firearm that uses a flint striking ignition mechanism. The flintlock, which was introduced in the early 17th century and replaced earlier firearm-ignition technologies, such as the match-lock and wheel-lock.

Flintlock continued to be in common use for over two centuries, replaced by percussion cap and, later, the cartridge-based systems in the early-to-mid 19th century.

Firearms using some form of flintlock mechanism were the primary form of weapons for over 200 years. The transition to percussion cap was a slow one, as a result of the flintlock’s long active life, it left a lasting legacy on our language.

Terms such as: “lock, stock, and barrel,” “going off half-cocked,” and “flash in the pan” stayed current in English.

Also, the weapon holding positions and drill commands that were originally devised to standardize carrying, loading and firing a flintlock weapon remained the standard for drill and display.

The time needed to reload, led to the need for flintlocks to be produced with two or more barrels for multiple shots.

Most flintlocks were made built at a time before modern manufacturing processes became common. Even in mass-produced weapons, parts were often handmade.

Machine-made, interchangeable parts began to be used just before flintlocks were replaced by cap locks.

The French Revolution and Napoleonic eras brought significant changes to France. However, after the Bourbon restoration, the old aristocracy returned and recovered much of the land they owned.

However, they ultimately lost all their ancient feudal rights and became more conservative. France was slow to industrialize, but there was an emerging French nationalism that showed its national pride in the Army, and foreign affairs.

The rifles and muskets that fired on Napoleon