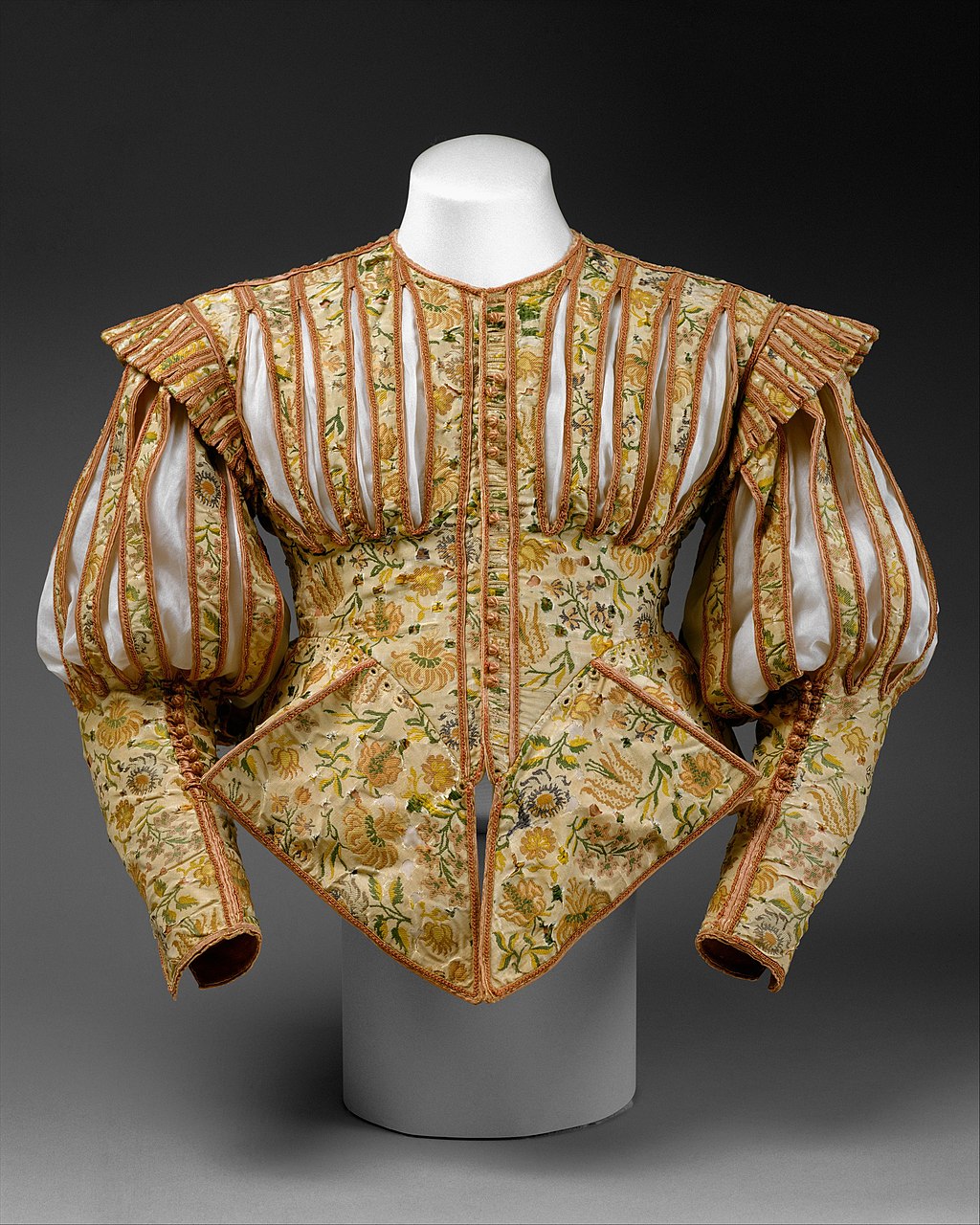 This man’s doublet is from the 1620s and is made of luxurious silk embellished with pinking and decorative slits. A doublet was a man’s snug-fitting jacket that is shaped and fitted to the man’s body.

Pinking was the intentional slashing of fabric and was used as a decorative technique to show colorful linings and shirts. The doublet had a long history of over 300 years with a variety of styles and cuts.

The doublet was usually worn under another layer of clothing such as a gown when in public. Initially, it was just stitched and quilted lining, which was worn under a piece of armor consisting of breastplate and backplate and used to prevent bruising and chafing.

Later it became elaborated enough to be seen on its own. Throughout its long history, the doublet served to give an elegant shape and padding to the body.

Doublets of the 14th and 15th centuries were generally hip-length, sometimes shorter, worn over the shirt. From the late 14th century, doublets were cut and padded to give the wearer a pigeon-breasted silhouette, a fashion that gradually died out in favor of a flatter natural fit.

Through the Tudor period, fashionable doublets remained close-fitting with baggy sleeves, and elaborate surface decoration such as pinks, slashes, embroidery, and applied braid.

In the early Elizabethan period, doublets were padded over the belly with sleeve attachments at the shoulder. By the 17th century, doublets were short-waisted. A typical sleeve of this period was full and slashed to show the shirt beneath.

Decorative ribbon points were pulled through eyelets on the breeches and the waist of the doublet to keep the breeches in place and were tied in elaborate bows.

The doublet fell out of fashion in the mid-17th century when Louis XIV of France and Charles II of England established a court costume for men consisting of a long coat, a waistcoat, a cravat, and breaches. The ancestor of the modern suit.

The Art of Power Dressing in the 16th Century

Why I dress as a gentleman… everyday of my life

Getting Dressed in the 18th Century – Men

“The best things in life are free.
The second best are very expensive.”
– Coco Chanel