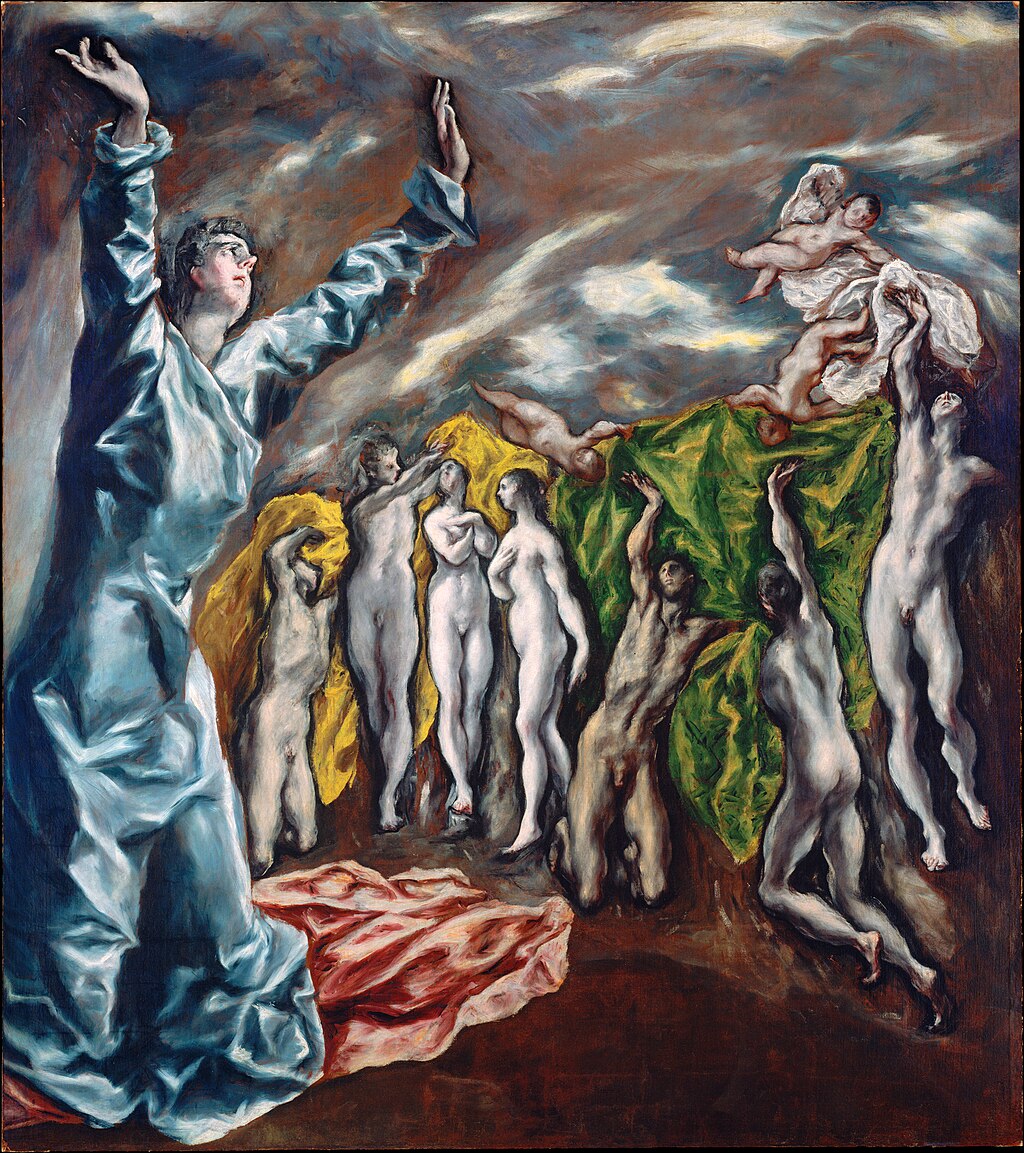 “Opening of the Fifth Seal” by El Greco

“Opening of the Fifth Seal” by El Greco depicts the story from the Book of Revelation (6:9–11), where the souls of persecuted martyrs cry out to God for justice upon Earth.

The ecstatic figure of St. John dominates the scene, while behind him, naked souls respond with supreme emotion as they receive white robes of salvation.

The upper portion of the canvas has been cut down, as it was destroyed in 1880. This lost upper portion is believed to have depicted divine love.

Also called the “The Fifth Seal of the Apocalypse” or “The Vision of Saint John,” this painting was created in the last years of El Greco’s life for a side-altar of the church of Saint John the Baptist outside the walls of Toledo.

After the 1880 fire, the work was in such poor condition that it was restored by trimming by at least 175 centimeters (68.9 in), leaving John the Evangelist pointing nowhere.

It was this strange revised composition that intrigued modern viewers the most and contributed to the painting’s fame in modernist circles.

It has been suggested that the Opening of the Fifth Seal served as an inspiration for the early Cubist works of Pablo Picasso, especially Les Demoiselles d’Avignon.

When Picasso was working on Les Demoiselles d’Avignon, he studied this painting when it resided in Paris.

El Greco was born in Crete, which at that time was part of the Republic of Venice and the center of Post-Byzantine art.

He trained and became a master Byzantine art before traveling to Venice to work; then he moved to Rome, where he opened a workshop and executed a series of works.

El Greco’s style was met with puzzlement by his 16th-century contemporaries, but he found greater appreciation in modern times and is today regarded as a precursor of both Expressionism and Cubism.

His works were a source of inspiration for poets and writers, and he is considered, as an artist, so individual that he belongs to no conventional school.

Demystifying El Greco: His Use of Wax, Clay, and Plaster Models

“I paint because the spirits whisper madly inside my head.”
– El Greco