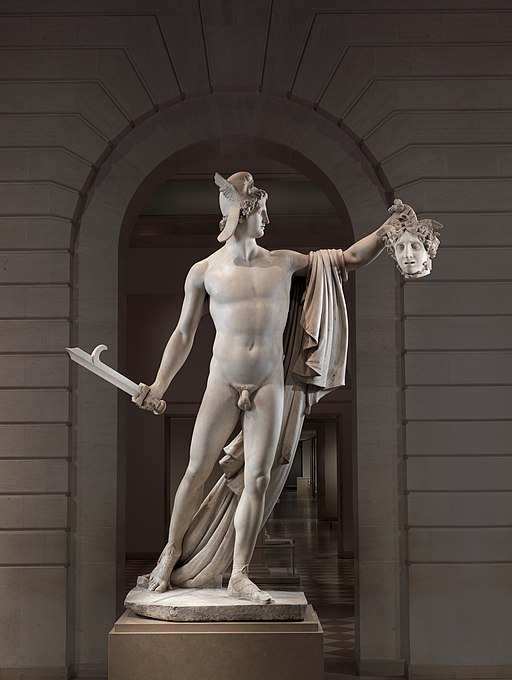 Perseus with the Head of Medusa by Antonio Canova

Perseus, with the Head of Medusa by Antonio Canova, depicts the Greek mythological story of Perseus beheading Medusa, a hideous woman-faced Gorgon whose hair was turned to snakes, and anyone that looked at her was turned to stone.

Perseus stands naked except for a cape hanging from his arm, sandals, and a winged hat, triumphant with Medus’s snakey head in his raised hand. This statue is a replica of Canova’s famed marble of Perseus in the Vatican, first shown in 1801.

Based on the Apollo Belvedere, which had been carried off to Paris under Napoleon, it was bought by Pope Pius VII and placed upon the pedestal where the Apollo had formerly stood. Medusa’s head is based on that of the antique Rondanini Medusa.

Perseus in Greek mythology was the founder of Mycenae and was the great Greek hero and slayer of monsters before the days of Heracles.

He beheaded the Gorgon Medusa and then went on to save Andromeda from a sea monster. He was the son of Zeus and the mortal Danaë, as well as the great-grandfather of Heracles.

Perseus avoided looking at Medusa’s face and turning to stone by viewing Medusa’s reflection in his polished shield. In this way, he safely approached and cut off her head.

Medusa was a monster, described as a winged human female with living venomous snakes in place of hair. Anyone who looked into her face would turn to stone.

Medusa was beheaded by the hero Perseus, who, after that, used her head, which retained its ability to turn onlookers to rock as a weapon until he gave it to the goddess Athena to place on her shield.

Antonio Canova (1757 – 1822) was an Italian Neoclassical sculptor, famous for his marble sculptures. Canova was regarded as one of the greatest of the Neoclassical artists. The Baroque and Classical Revival inspired his artwork.

Antonio Canova was born in the Venetian Republic. Unfortunately, his father was a stonecutter, died when Canova was three years old.

Fortunately, he was put into the care of his paternal grandfather, who was a stonemason and a sculptor who specialized in altars with statues and low reliefs.

His grandfather led Antonio into the art of sculpting. At the age of nine, Antonio Canova executed two small shrines of Carrara marble, which are still in existence. After these works, he was employed under his grandfather as a sculptor.

He promoted his reputation by publishing his works’ engravings and having marble versions of plaster casts made in his workshop.

Perseus with the Head of Medusa

Perseus with the Head of Medusa

Perseus and the head of Medusa of Antonio Canova

The Story of Perseus

“Writer’s block results from too much head. Cut off your head. Pegasus, poetry, was born of Medusa when her head was cut off. You have to be reckless when writing. Be as crazy as your conscience allows.”
– Joseph Campbell