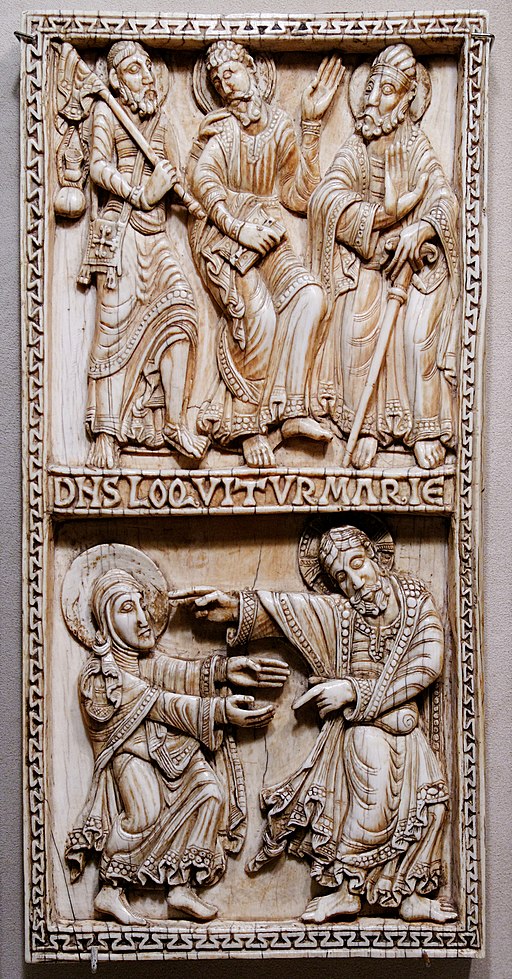 Plaque with the Journey to Emmaus and Noli Me Tangere

This ivory plaque shows the Journey to Emmaus and Jesus telling Mary Magdalene not to touch him or “Noli me tangere,” which is Latin for “Don’t Touch Me.”

According to the Gospels, Jesus appeared to his disciples several times after the Resurrection, including on the road from Jerusalem to Emmaus.

The top of this plaque shows the disciples lament the Crucifixion, while Jesus explains the redemptive nature of his sacrifice.

The bottom of this plaque shows the scene where Jesus appears to Mary Magdalene, who when she recognizes him, he tells her not to touch him since the Ascension has not yet occurred.

The swirling drapery and emphatic gestures convey the drama of the events portrayed and reference the plaque to works produced in León, Spain, which was a famous royal city on the pilgrimage road.

This ivory carving was part of a larger ensemble, decorated with other scenes from the life of Jesus.

“Noli me tangere” is the Latin version of a phrase spoken, according to the Gospel of John, by Jesus to Mary Magdalene when she recognized him after his resurrection.

The biblical scene of Mary Magdalene recognizing Jesus Christ after his resurrection became the subject of a long, widespread, and continuous iconographic tradition in Christian art from Late Antiquity to the present. The expression has also found its way into culture and literature.

Plaque with the Journey to Emmaus and Noli Me Tangere

A Tour of the Metropolitan Museum of Art – MET

“Those that walketh with the wise shall be wise: but a companion of fools shall be destroyed.”
– Proverbs of Solomon