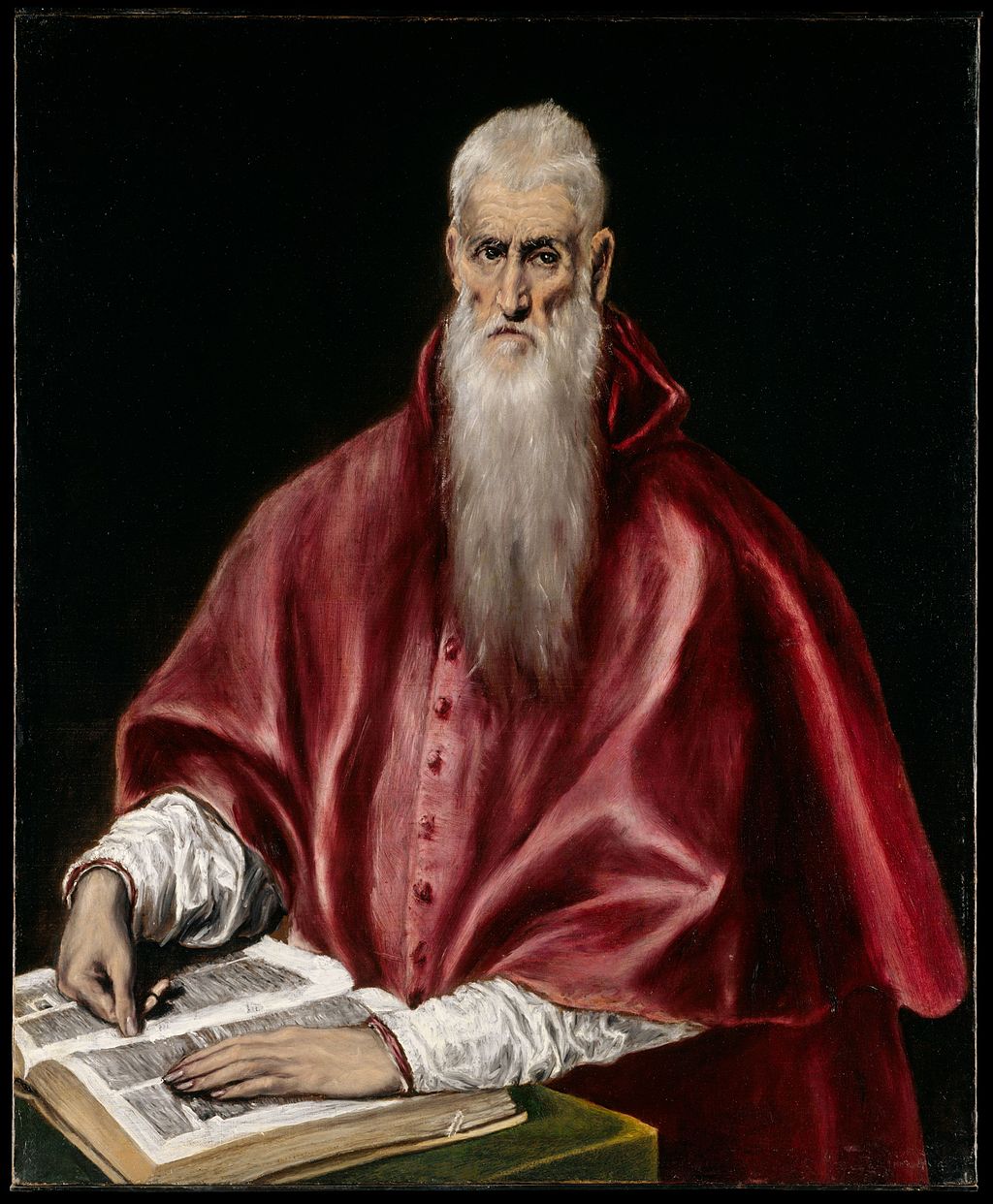 “Saint Jerome as Scholar” by El Greco (The MET)

This painting of “Saint Jerome” by El Greco is one of five known paintings of Saint Jerome by El Greco. Saint Jerome is shown in the red vestments of a cardinal, although the office did not exist in his lifetime. He is seated before an open book, symbolizing his role as translator of the Bible from Greek into Latin, in the fifth century. Saint Jerome’s translation is called the Vulgate and was in use throughout the Catholic Church for many centuries.

El Greco’s painting shows him with gaunt, sunken features and a long white beard, which are symbolic of Saint Jerome’s story as a penitent and his retreat to the Syrian desert. El Greco has successfully synthesized the two aspects of Saint Jerome, the scholarly and the ascetic. During the Renaissance, paintings of Saint Jerome were famous, and they typically showed him either in his study or performing acts of penance in the wilderness. These pictures adorned the walls of the homes of many humanists and scholars.

Jerome (347 – 420) was a priest, confessor, theologian, and historian. He was born in a village on the border of Dalmatia, a Roman province on the eastern coast of the Adriatic Sea, between Greece and Italy. He is best known for his translation of most of the Bible into Latin and for his commentaries on the Gospels.  He is recognized as a Saint and Doctor of the Church by the Roman Catholic Church, the Eastern Orthodox Church, the Lutheran Church, and the Anglican Communion. His written contributions to the church were extensive.

Asceticism is a lifestyle characterized by abstinence from pleasures to pursue spiritual goals. Christian authors of late antiquity such as Jerome interpreted Biblical texts within an ascetic religious environment. Scriptural examples of asceticism could be found in the lives of John the Baptist, Jesus, the twelve apostles, and the Apostle Paul. An emphasis on an ascetic religious life was evident in both early Christian writings and practices.

Jerome, in about 373, set out on a journey through Thrace and Asia Minor into northern Syria. At Antioch, where he stayed the longest, two of his companions died, and he was seriously ill more than once. During one of these illnesses, he had a vision that led him to lay aside his legal studies and devote himself to God. Seized with a desire for a life of ascetic penance, Jerome went for a time to the desert, during this period, he seems to have found time for religious study. After some years in the desert, he returned to Antioch to be ordained and then went to Constantinople to pursue an education in Scripture.

Thousands of Christian hermits at one time inhabited the deserts of the Middle East. Five hundred years after Jerome’s death, an association of monasteries formed on Mount Athos, in Eastern Orthodox tradition. Mount Athos became the most important center of Orthodox Christian ascetic groups in the centuries that followed. In the modern era, Mount Athos and Meteora in Greece have remained essential centers.

Doménikos Theotokópoulos, widely known as El Greco, Spanish for “The Greek,” was a painter, sculptor, and architect of the Spanish Renaissance. The artist typically signed his paintings with his full birth name in Greek letters, Δομήνικος Θεοτοκόπουλος (Doménikos Theotokópoulos), often adding the word Κρής (Krēs, “Cretan”). He is best known for elongated figures and for marrying Byzantine traditions with those of Western painting.

El Greco was born in Crete, which at that time was part of the Republic of Venice and the center of Post-Byzantine art. He trained and became a master of Byzantine art before traveling to Venice to work; then he moved to Rome, where he opened a workshop and executed a series of works. In 1577, he moved to Toledo, Spain, where he lived and worked until his death. In Toledo, El Greco received several major commissions and produced his best-known paintings.

El Greco’s style was met with puzzlement by his 14th-century contemporaries, but he found greater appreciation in more modern times and is regarded as a precursor of both Expressionism and Cubism. His works were a source of inspiration for poets and writers, and he is considered, as an artist, so individual that he belongs to no conventional school.

“Art is everywhere you look for it, hail the twinkling stars for they are God’s careless splatters.”
– El Greco