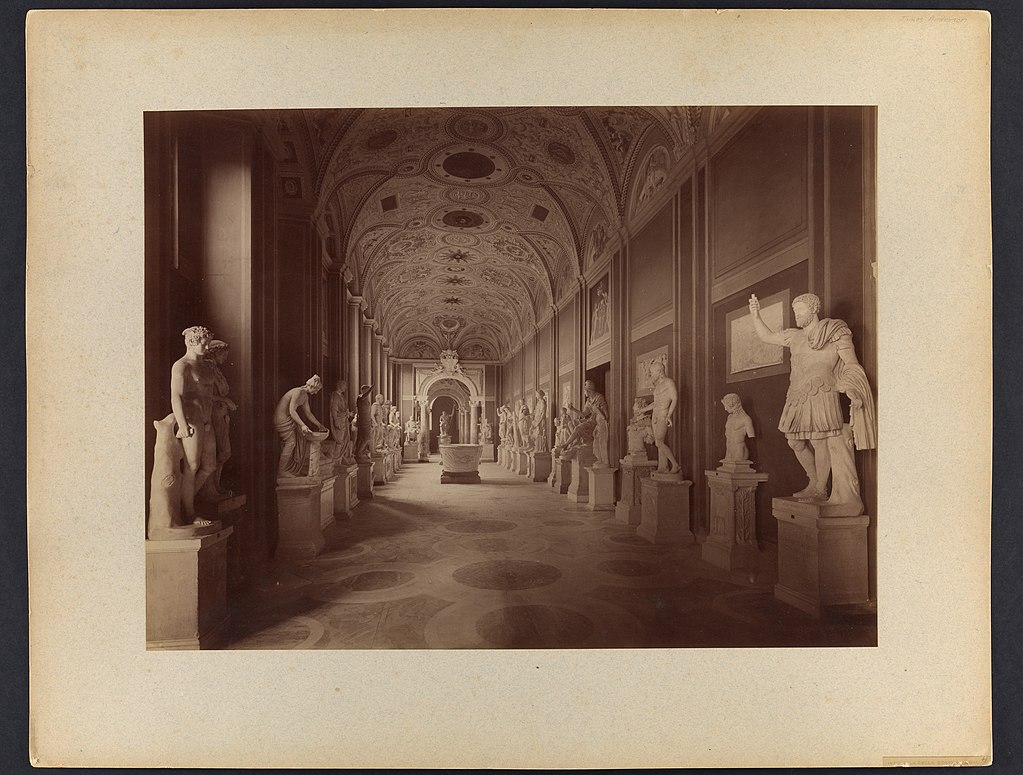 This photograph shows the  Gallery of Statues (Sala Delle Statue) at the Vatican, taken over 150 years ago. James Anderson (1813–1877) made this photograph in the 1850s using an albumen print from a glass negative.

Today this view at the Gallery of Statues, which is part of the Vatican Museum, has not changed substantially, most of these statues from 150 years ago can be seen in modern photographs of this gallery.

The Gallery of the Statues holds various famous statues, including Sleeping Ariadne, the bust of Menander, and The Chiaramonti Caesar.

Albumen silver print was the first commercially available method of producing a photographic print on a paper base from a negative.

In the 1850s, the process used the albumen found in egg whites to bind the photographic chemicals to the paper. This process became the dominant form for a photograph from 1855 to the start of the 20th century.

Photographic plates preceded photographic film as the medium for capturing images in photography. A light-sensitive emulsion was coated on a glass plate, instead of a clear plastic film.

The earliest plastic films were not available for the amateur until the late 1880s. The new plastic was not of high optical quality and initially was more expensive to produce than glass.

The quality and price of plastic films eventually improved, and most amateurs increasingly abandoned glass plates for plastic films.

The Gallery of Statues is part of the Pio Clementino Museum, which takes its name from two popes, Clement XIV, who established the museum in 1771, and Pius VI, the pope who brought the museum to completion in 1776.

Clement XIV came up with the idea of creating a new museum in Innocent VIII’s Belvedere Palace and started the refurbishment work.

The Pio-Clementino museum originally contained the Renaissance and antique works.

The museum and collection were enlarged by Clement’s successor Pius VI. Today, the museum houses works of Greek and Roman sculpture.

MET Arts of Africa, Oceania and the Americas Collection

” Photography is a major force in explaining man to man.”
– Edward Steichen”