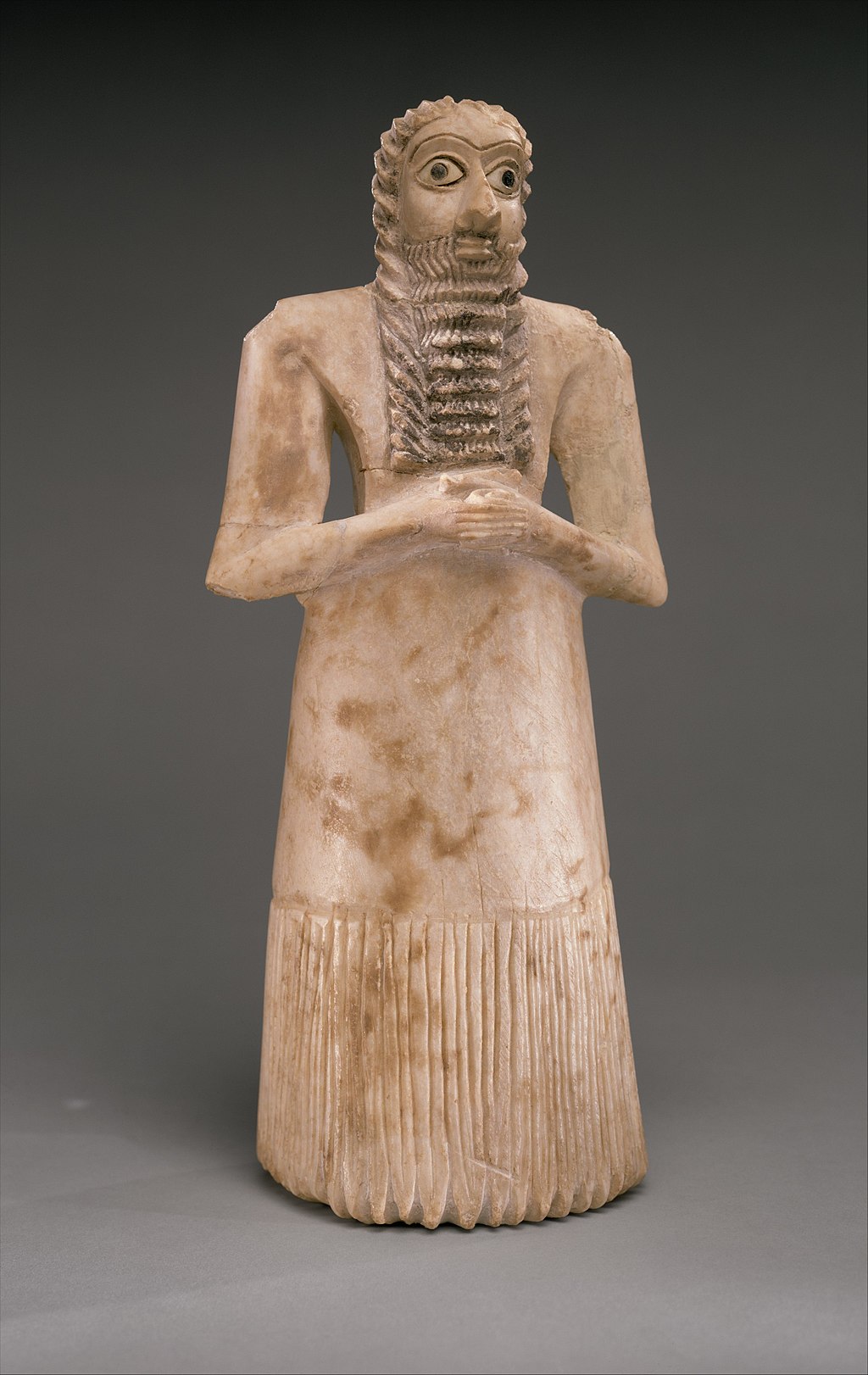 This “Standing Male Worshiper” carved from gypsum alabaster is shown with clasped hands and a wide-eyed gaze. It was placed in a temple and dedicated to a Sumerian god, to pray perpetually on behalf of the person it represented. This statue is one of twelve figures known collectively as the “Tell Asmar Hoard” with artifacts dating back to 2900–2550 BC. The hoard was discovered in 1933 at Eshnunna in eastern Iraq. It is historically unique because it is one of a few definitive examples of the abstract style of Early Dynastic temple sculpture.

This figure derived from the Sumerian culture and was created to worship an early Mesopotamia god. The  Sumerians believed that gods were physically present in nature and experiences of daily life. Enlil was considered the most potent Mesopotamian god when this statue was created. Enlil, later known as Elil, was the ancient Mesopotamian god of wind, air, earth, and storms. He was the chief deity of the Sumerian pantheon and was later worshipped by the Akkadians, Babylonians, and Assyrians.

Enlil plays a vital role in the Sumerian creation myth. According to Sumerian religion, he separates heaven from earth, making the world habitable for humans. In the Sumerian Flood myth, Enlil sent the flood to exterminate the human race, who made too much noise and prevented him from sleeping.

The religion practiced by the people of Sumer was one in which they regarded their divinities as responsible for all matters of the natural and social orders. The Sumerians, who were the first literate civilization of ancient Mesopotamia, believed that the universe had come into being through a series of cosmic births. The primeval waters gave birth to the sky and the earth who mated together and produced a son who separated heaven from earth and claimed the earth as his domain. Humans were then created, but heaven was reserved exclusively for deities.

Before the beginning of Sumerian kingship, the city-states were ruled by priests and religious officials. Kings supplanted this role, but priests continued to exert influence on Sumerian society. Early Sumerian temples were simple, one-room structures, sometimes built on raised platforms. Towards the end of Sumerian civilization, these temples evolved into ziggurats, which were tall, pyramidal structures with sanctuaries at the tops.

Sumerian religion profoundly influenced the religious beliefs of later Mesopotamian people and was retained in the mythologies and religions of many Middle Eastern culture groups. Scholars of comparative mythology have noticed many parallels between the stories of the ancient Sumerians and those recorded later in the early parts of the Hebrew Bible.

The Tell Asmar Hoard is a collection of twelve statues unearthed in 1933 at modern Tell Asmar in Iraq. The hoard was found during an excavation beneath the floor of a temple dedicated to the god Abu. The statues were neatly stacked in a rectangular cavity beside an altar in the sanctuary. They were buried intentionally for unknown reasons. It has been suggested that priests periodically buried old or badly damaged statues to make room in the temple for their replacements.

The statues range in height from 21 cm (8.2 in.) to 72 cm (28.3 in.). Of the twelve statues found, ten are male, and two are female. Eight of the figures are made from Gypsum, two from limestone, and one from alabaster. All the figures, except for one that is kneeling, are rendered in a standing position.

The males wear kilts with a patterned hem that covers the midsection and thighs. Their broad shoulders and thick, circular arms frame the bare chest, which is partially covered by a black, stylized beard.

All the males, except for one that is bald and clean-shaven, have long hair rendered in two symmetrical halves that frame the smooth surfaces of the cheeks and forehead. The large eyes, the stylistic feature that the statues share in common, are made from inlays of white shell and black limestone, and one figure has pupils of lapis lazuli. These additions are secured with bitumen. Bitumen was also used as the pigment to give the beard and hair its characteristic black color.

Some of the statues are inscribed on the back and bottom with a name and personalized supplicatory message, while others state “one who offers prayers.” The figures functioned as a surrogate for worshipers who wished to leave their prayers with the god.

A Tour of Mesopotamian Art

“Don’t pick things ahead of time; some bear fruit later.”

“You should not pass judgment when you drink beer.”

“As long as you live, you should not increase evil by telling lies.”

“A loving heart maintains a family; a hateful heart destroys a family.”

“For his pleasure, he got married. On his thinking it over, he got divorced.”

“A palace is a slippery place that catches those who do not know it.”

“A slave entrusted with a burial will be negligent.”

“Writing is the mother of eloquence and the father of artists.”

“A sweet word is everybody’s friend.”

“The owner of a house should reinforce the windows against burglars.”

“The poor man chews whatever he is given.”

“A dog which is played with turns into a puppy.”

“Control the dog, but love the puppy!”

“A troubled mind makes you sick.”

“The poor man must always look to his next meal.”

“The sheep-shearer is himself dressed in dirty rags.”

“Commit no crime, and fear will not consume you.”

“Bride, as you treat your mother-in-law, so will women later treat you.”

“A troubled mind makes you sick.”

A Tour of the Metropolitan Museum of Art

“When righteousness is cut off, injustice is increased.”
– Sumerian Proverb