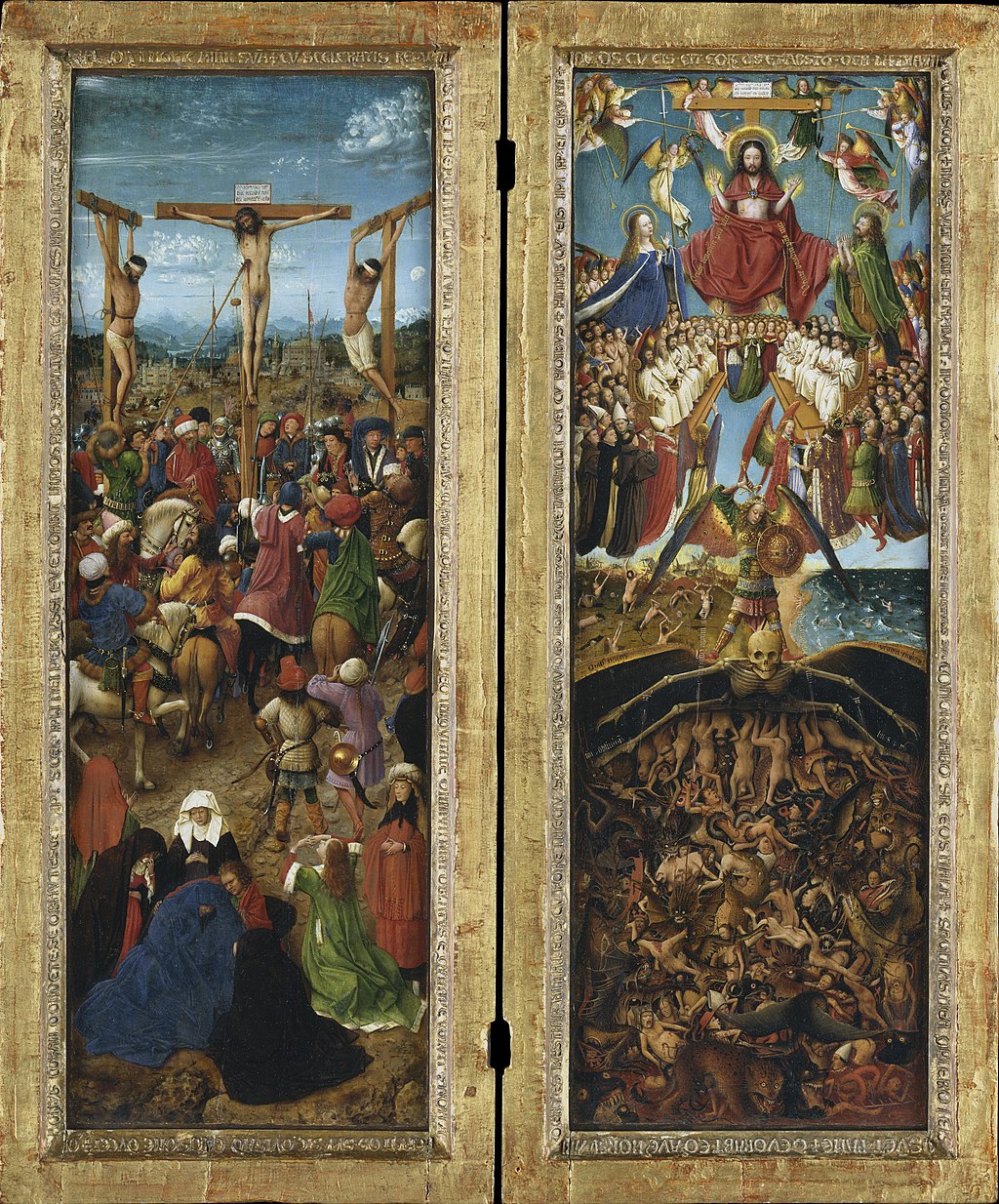 The Crucifixion and Last Judgment Diptych consist of two small painted panels attributed to the Early Netherlandish artist Jan van Eyck, with parts finished by members of his workshop.

This diptych is renowned for its intricate and highly detailed iconography, and the technical skill evident in its completion. It was executed in a small format and was commissioned for private devotion. The original gilt frames contain Biblical passages in Latin.

The left-hand panel depicts the Crucifixion with a view of Jerusalem in the distance. It shows Christ’s followers grieving in the foreground, soldiers, spectators surrounding the cross in the mid-ground, and three crucified bodies in the top third of the painting.

Crucifixion was a painful capital punishment method in which the victim is tied or nailed to a large wooden beam and left to hang for several days until eventual death.

The crucifixion of Jesus is a central narrative in Christianity, and the cross is the primary religious symbol for many Christian churches.

The right-hand panel portrays scenes associated with the Last Judgement. It shows a hellscape at its base, the resurrected awaiting judgment in the center, and at the top third is Christ flanked by saints, apostles, clergy, and the nobility.

The top third of the painting also contains Greek, Latin, and Hebrew inscriptions. The Last Judgment is part of the three largest Abrahamic religions: Jewish, Christian, and Islamic.

It represents a worldview of destiny in which our world ends with a resurrection of the dead and the final judgment of each of us.

Nothing is known of the work’s provenance before the 1840s. After that date, it was recorded that the panels were bought at auction from either a Spanish monastery or convent by a Russian diplomat while living in Spain between 1814 and 1821.

The diplomat left his pictures to Tsar Nicholas I in 1845, and they came into the possession of the Hermitage Gallery in Saint Petersburg in 1917.

The panels were included in the Soviet sale of Hermitage paintings, and a New York art dealer purchased them for $185,000 in 1931. The Diptych was then sold to the Metropolitan Museum in New York.

He was employed as a painter to John III, the Pitiless, ruler of Holland, and later as court painter to Philip the Good, Duke of Burgundy until he moved to Bruges in 1429, where he lived until his death.

He was highly regarded by the Duke of Burgundy and undertook several diplomatic visits abroad.

About 20 surviving paintings are attributed to him and the Ghent Altarpiece and the illuminated miniatures of the Turin-Milan Hours.

Van Eyck’s work comes from the International Gothic style, but he soon eclipsed it, in part through a greater emphasis on naturalism and realism.

The Crucifixion and Last Judgement diptych by Jan van Eyck

“Love all, trust a few, do wrong to none.”
– William Shakespeare