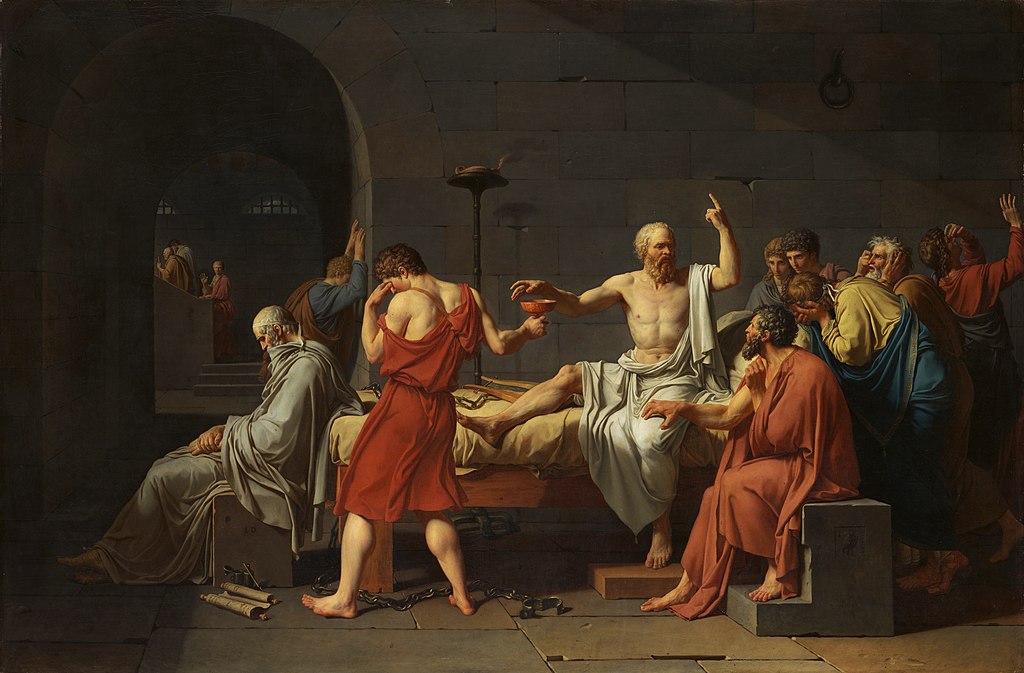 “The Death of Socrates” by Jacques-Louis David

“The Death of Socrates” by Jacques-Louis David depicts the famous philosopher as the stoic older man in a white robe sitting upright on a bed. His right hand extended over a cup, the left hand is gesturing in the air.

He is surrounded by his students and loyal followers, who are all showing emotional distress. The young man handing him the cup looks the other way, with his face in his hand. Another man clutches Socrates’s thigh, begging him not to take the poison.

An elderly man sits at the end of the bed. It is Plato, his most famous student, and he is shown slumped over and looking in his lap.

This famous painting depicts the execution of Socrates, as told by Plato. Socrates has been convicted of corrupting the youth of Athens and introducing strange gods and has been sentenced to die by drinking poison hemlock.

Socrates uses his death as the last lesson for his pupils, by not fleeing when he was given the opportunity, but facing death calmly.

Jacques-Louis David uses the color of the robes to highlight the level of emotional distress display by the various people in this painting. The shades of red become more vibrant and culminate in the dark red robe of the man holding the cup of poison.

The only two serene men, Socrates and Plato, are shown in a contrasting bluish and white.

Socrates was a classical Greek Athenian philosopher credited as one of the founders of Western philosophy. He left no original writing of his teachings and is known chiefly through the accounts of his students, such as Plato and Xenophon.

Plato’s dialogues are among the most comprehensive reports of Socrates to survive, though it is unclear the degree to which Plato represented Socrates’s exact views.

Socrates defended his role by continuing to argue for the truth until the end. In 399 BC, Socrates was found guilty, and as punishment was sentenced to death by the drinking of a mixture containing poison hemlock.

Socrates turned down pleas to attempt an escape from prison. He had an opportunity to escape, and there was an expectation that he would leave Athens in exile and not die, but he refused that option.

Socrates’s death is described at the end of Plato’s “Phaedo,” which states that after drinking the poison, he walked around until his legs felt numb. The numbness slowly crept up his body until it reached his heart. Some of Socrates last words included:

“all of philosophy is training for death.”

In the 1780s, his history paintings marked a change in taste away from Rococo frivolity toward a classical austerity and feeling, harmonizing with the moral climate of the final years of the Royal Régime.

The Death of Socrates

“An unexamined life is not worth living.”

“Beware the barrenness of a busy life.”

“If a man is proud of his wealth, he should not be praised until it is known how he employs it.”

“The beginning of wisdom is a definition of terms.”

“What a lot of things there are that a man can do without.”

“Education is the kindling of a flame, not the filling of a vessel.”

“How many are the things I can do without!”

“When the debate is over, slander becomes the tool of the loser.”

“True knowledge exists in knowing that you know nothing.”

“To find yourself, think for yourself.”

“I was too honest a man to be a politician and live.”

“I cannot teach anybody anything; I can only make them think.”

“There is only one good, knowledge, and one evil, ignorance.”

“I cannot teach anybody anything. I can only make them think.”

“Our prayers should be for blessings in general, for God knows best what is good for us.”

“They are not only idle who do nothing, but they are idle also who might be better employed.”

The Death of Socrates: How To Read A Painting

The Death of Socrates- Analysis

The Death of Socrates (David)

“An unexamined life is not worth living.”
– Socrates