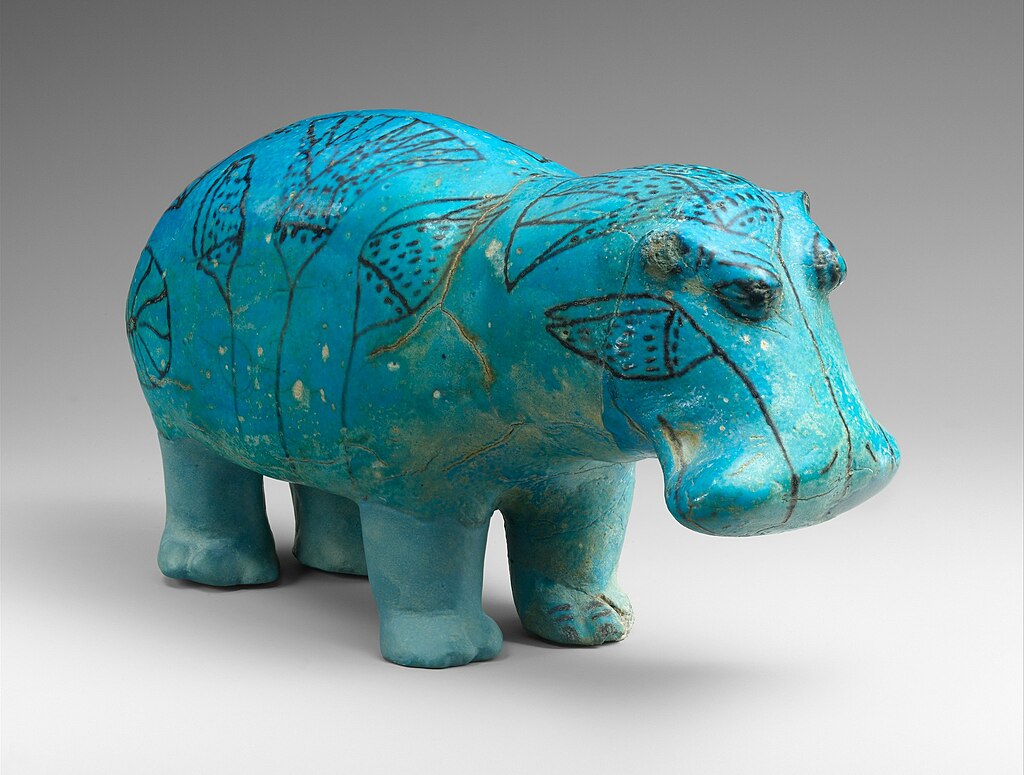 This Egyptian faience hippopotamus from the Middle Kingdom of Egypt was discovered in a shaft associated with the tomb chapel of “The Steward, Senbi” at Meir, Upper Egypt, and dates from c. 1961 – 1878 B.C.

This blue statuette may have held some religious significance, as Hippopotamuses were sometimes associated with one of the forms of the god Seth.

Black paint has been used to enhance the eyes and to decorate the body with lotus flowers, buds, and leaves symbolizing its natural surroundings of the Nile.

The hippopotamus was one of the most feared animals for ancient Egyptians, and, in this case, three of its legs were purposely broken to prevent it from harming the deceased in the afterlife.

Hippopotamuses were considered dangerous and represented the destructive power of the natural world, chaos, and evil. The museum has since restored these legs.

This small figurine was made using Egyptian faience, which is composed mainly of silica (sand or crushed quartz) along with small amounts of sodium and calcium.

Faience was porous and malleable and could be shaped by hand or cast in molds. Although not pottery on a strict definition since it has no clay, faience is often regarded as pottery. Faience is considered a non-clay ceramic.

It was a precursor to glazed clay-based ceramics, such as earthenware and stoneware.

In 1931 a published article about the hippo for the British humor magazine Punch referred to this artifact with affection as “William.”

The Met museum republished the story in the Museum’s Bulletin, and the name, William, caught on and became the popular name for this figure.

In 1936 the Met released a book entitled “William and his Friends: A Group of Notable Creatures in the Metropolitan Museum of Art.” Since then, William has continued to appear in some museum logos and museum merchandise.

The hippopotamus was a favorite statuette in Ancient Egyptian art. Over fifty blue faience hippopotamus statuettes can be found in museums and collections across the world, varying in size from about nine to twenty-two centimeters in length.

Ancient Egyptians believed them to be associated with fertility and rebirth.

The ancient Egyptians believed that the hippopotamus also had negative traits and could evoke chaotic forces because of the danger they pose to humans in the wild.

So their legs were snapped off the statuettes before placing them in tombs, ensuring that the hippopotamus would not chase and eat the soul of the deceased.

The Met’s unofficial mascot—this tiny hippo named William—has a bit of a dark side | Art, Explained

The Nile in the hippopotamus: Being and becoming in faience figurines of Middle Kingdom

“Every man is rich in excuses to safeguard his prejudices,
his instincts, and his opinions.”
– Egyptian Proverbs