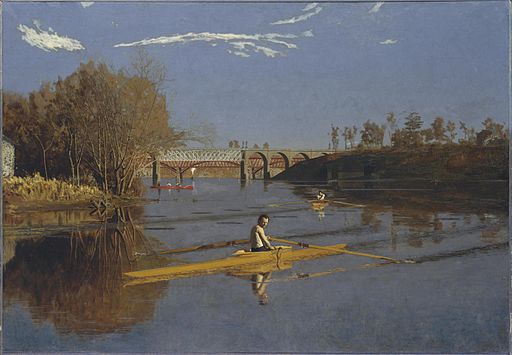 “Max Schmitt in a Single Scull” by Thomas Eakins

“Max Schmitt in a Single Scull” by Thomas Eakins depicts the Schuylkill River in Philadelphia, Pennsylvania, and celebrates the victory of the artist’s friend Max Schmitt on October 5, 1870, in the annual single sculls competition.

Max Schmitt (1843–1900) had attended Philadelphia Central High School with Eakins, and the two were close friends. The painting is also known as “The Champion Single Sculls” and was painted in 1871.

Coincidently, Eakins had recently returned to Philadelphia, following four years of study at the École des Beaux-Arts in Paris, and he was a witness to Schmitt’s victory.

The painting’s composition accurately portrays the event by reproducing the day’s weather conditions at the time of Schmitt’s triumph. 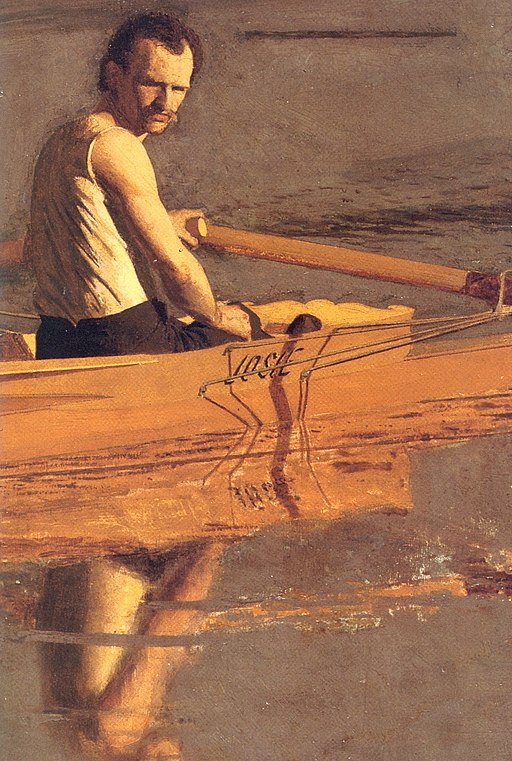 Max Schmitt in a Single Scull by Thomas Eakins

Schmitt is depicted nearly at rest, dragging his oars with the disappearing eddies of his course visible in the water. The location is just downstream of the Columbia Railroad Bridge, the site of the turn in the race.

Schmitt was an early convert to sculls and owned his own craft, named “Josie,” as inscribed on his boat. Eakins was also a keen oarsman and painted himself as the rower in the middle distance. He signed the painting – “Eakins, 1871” – on the stern of his scull.

The painting shows the influences of his tutors in France, Jean-Léon Gérôme and Léon Bonnat, and Diego Velázquez, the Spanish artist.

Eakins’s self-portrait as the rower in the middle distance

Max Schmitt in a Single Scull

Thomas Eakins (1844 – 1916) was an American realist painter, photographer, sculptor, and teacher. He is acknowledged to be one of the most important artists in American art history.

From the 1870s, Eakins worked from life, choosing as his subject the people of his hometown of Philadelphia. He painted several hundred portraits, and his work offers an overview of Philadelphia’s intellectual life in the late 19th and early 20th centuries.

Eakins also took a keen interest in the new technologies of motion photography, a field in which he was an innovator.

As a teacher, he was a highly influential presence in American art. Eakins was also a controversial figure whose work received little official recognition during his lifetime.

“Only the guy who isn’t rowing has time to rock the boat.”
– Jean-Paul Sartre