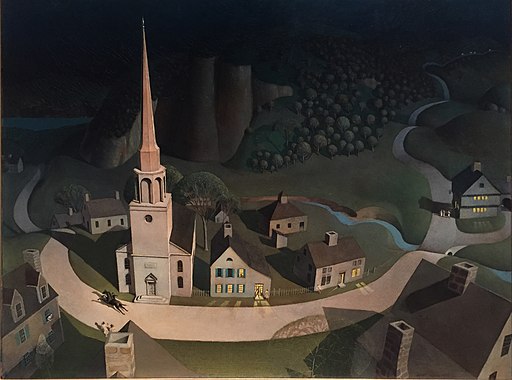 “The Midnight Ride of Paul Revere” by Grant Wood

“The Midnight Ride of Paul Revere” by Grant Wood depicts the American patriot Paul Revere during his midnight ride on April 18, 1775. From a bird’s-eye view, the composition shows Revere on horseback racing through a colonial town square in Massachusetts.

The subject was inspired by the poem “Paul Revere’s Ride” by Henry Wadsworth Longfellow. The poem is spoken by the Wayside Inn landlord and tells a partly fictionalized story of Paul Revere.

In the poem, Revere tells a friend to prepare signal lanterns in the Old North Church, Boston, to inform him whether the British will attack by land or sea.

The unnamed friend climbs up the steeple and soon sets up two signal lanterns, informing Revere that the British are coming by sea. Revere rides his horse through Medford, Lexington, and Concord to warn the patriots.

Despite the work’s historical subject matter, Wood did not attempt to depict the scene with visual accuracy. The perspective is from a high altitude as Revere rides through a brightly lit Lexington, Massachusetts.

The horse that Revere rides upon was modeled after a child’s rocking horse. The moon lights up the houses as if by electric light. The focus is on the landscape and architecture of colonial Massachusetts.

The dramatic moonlight casts shadows on the stylized houses, and the geometric greenery portrays a dreamlike dimension that echos the imagery in Longfellow’s poem.

“Paul Revere’s Ride” is an 1860 poem by American poet Henry Wadsworth Longfellow that commemorates the actions of American patriot Paul Revere in 1775, although it has several inaccuracies.

It was first published in an 1861 issue of The Atlantic Monthly.

“So through the night rode Paul Revere;
And so through the night went his cry of alarm
To every Middlesex village and farm,
A cry of defiance, and not of fear,
A voice in the darkness, a knock at the door,
And a word that shall echo forevermore!
For, borne on the night-wind of the Past,
Through all our history, to the last,
In the hour of darkness and peril and need,
The people will waken and listen to hear
The hurrying hoof-beats of that steed,
And the midnight message of Paul Revere.”

For a long time, historians of the American Revolution relied almost entirely on Longfellow’s poem as historical evidence. In re-examining the episode, some historians in the 20th century have attempted to demythologize Paul Revere.

While it is true that Revere was not the only rider that night, that does not refute the fact that Revere completed the first phase of his mission to warn Adams and Hancock.

Other historians have since stressed Revere’s important role in the opening of the Revolution.

Paul Revere and the American Revolution

“The British are coming. One if by land, two if by sea.”
– Paul Revere