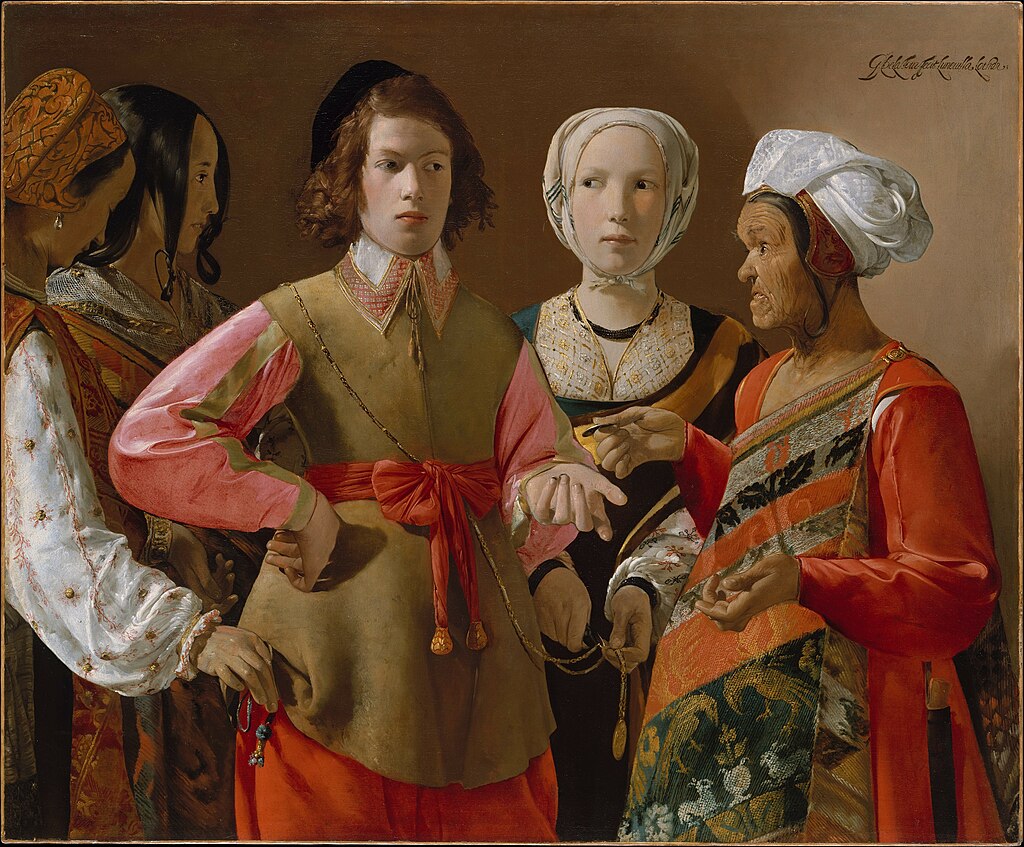 “The Fortune Teller” by Georges de La Tour was painted in 1630 and re-discovered in 1960. The painting catches a moment where a young man of wealth is having his fortune told by the older woman at right.

The fortune-teller takes the coin from his hand, not only in payment but as part of the ritual in which she will cross his hand with it. Most of the women portrayed are gypsies, and after the stereotype of the time, they are depicted as thieves.

As the young man is engrossed in the fortune-telling, the woman on the left is stealing the coin purse from his pocket. Her companion in profile has a hand ready to take the purse.

The girl on the boy’s left is also in on the conspiracy, as she cuts a medal worn by the boy from its chain.

The painting’s authenticity has been questioned but is now accepted by the MET as La Tour’s work.

Georges de La Tour is better known for his religious compositions, in which the figures are illuminated by a single light source and lack the elaborate costume detail of The Fortune Teller’s characters.

The painting was discovered in a French castle in 1949. There was some doubt about its authenticity, and it remained with an art dealer until the MET purchased it in 1960.

How the painting left France became a matter of controversy in the French press in the 1960s.

After his death in 1652, La Tour’s work was forgotten until rediscovered in the early 1900s. Some of La Tour’s work had been confused with Vermeer when the Dutch artist underwent his own rediscovery in the nineteenth century.

Fortune-telling is the practice of predicting information about a person’s life and is associated with the methods of divination.

Divination is considered part of a religious ritual, invoking deities or spirits, while the term fortune-telling implies a less serious or formal setting.

Historically, fortune telling grew out of ancient folklore and the Renaissance magic associated with Romani people.

During the 19th and 20th century, methods of divination from non-Western cultures have also been adopted for fortune telling in western popular culture.

There is opposition to fortune telling in Christianity, Islam, and Judaism based on scriptural prohibitions against divination.

The scientific community dismisses fortune-telling as being based on superstition.

In some countries, there are a variety of laws that restrict fortune-telling and requiring the licensing or the use of terminology that avoids the term “fortune teller” in preference for terms such as “spiritual advisor” or “psychic consultant.”

Some laws outright forbid the practice in some areas of the world.

“Fortune-telling doesn’t reveal the future; it mirrors the present.
It resonates against what your subconscious already knows
and hauls it up out of the darkness so you can get a good look at it.”
– Charles de Lint