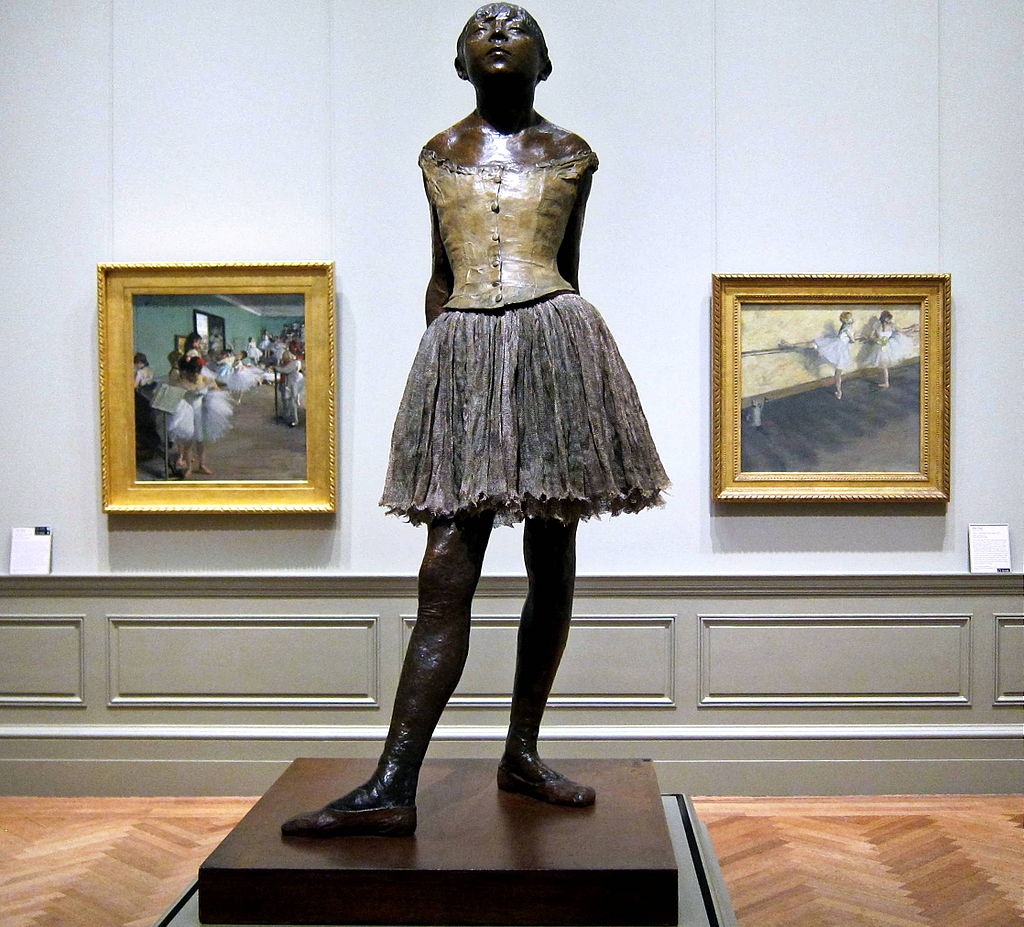 “The Little Fourteen-Year-Old Dancer” by Edgar Degas is a sculpture begun about 1880 by Edgar Degas of a young student at the Paris Opera Ballet dance school.

The statue is one-third life-size and was initially sculpted in wax. The dancer is dressed in a bodice, tutu and ballet slippers.

This sculpture is one of 28 bronze repetitions that appear in museums around the world, which were cast after Degas’ death. The tutus worn by the bronzes vary from museum to museum.

The arms are taut, and the legs and feet are placed in a ballet position. There is tension in the pose, an image of a young adolescent ballerina being put through her paces.

“People call me the painter of dancing girls, it has never occurred to them that my chief interest in dancers lies in rendering movement and painting pretty clothes.”

In this world of wealth and poverty, Degas’s studio was once visited by the police morals unit, wanting to know why so many little girls were coming and going. The exact relationship between the model and Edgar Degas is a matter of debate.

At the ballet, Degas captured a world that excited his taste for classical beauty and his eye for modern realism. He became a regular visitor to the Paris Opéra and its Ballet.

He invented new techniques for drawing and painting the world of pink and white, so full of hard work, ritual and tradition.

At the sixth Impressionist exhibition of 1881, Edgar Degas showed the original of this sculpture, which was the only sculpture that he ever exhibited in public.

The statue was not well received by the critics who protested that she was ugly. The mixed media of the figurine, basically a wax statuette dressed in real clothes, was very innovative, and the work’s realism was revolutionary.

After Degas’s death, his heirs authorized that copies be cast in bronze of his wax sculptures. Paul-Albert Bartholomé, a sculptor and Degas’s friend, prepared the figures for casting, a process executed by a Paris foundry.

The quality of the bronzes was controlled, and their edition was limited.

Many had deteriorated. Except for the wax “Little Fourteen-Year-Old Dancer,” none of the other sculptures had been publicly exhibited during the Degas’s lifetime.

“Muses work all day long and then at night, get together and dance…”

“Conversation in real life is full of half-finished sentences and overlapping talk. Why shouldn’t painting be too?”

A Virtual Tour of the Metropolitan Museum of Art – MET