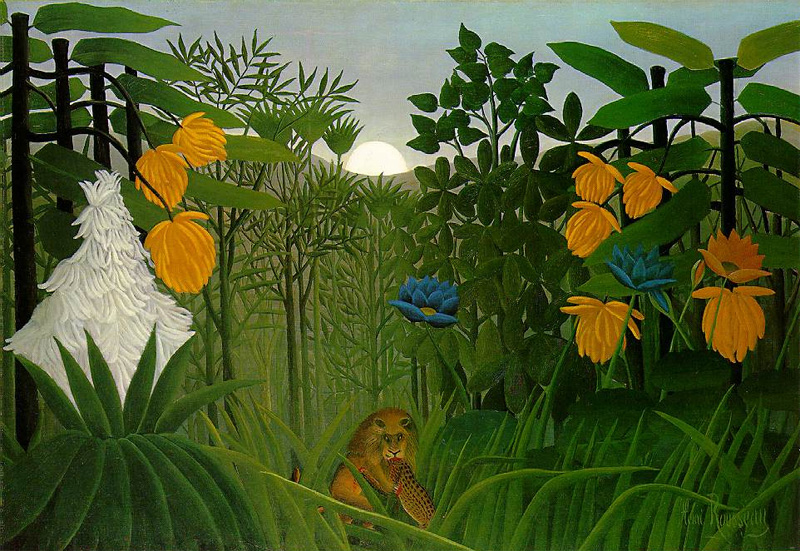 “The Repast of the Lion”

“The Repast of the Lion” by Henri Rousseau depicts a feeding lion in a lush and exotic jungle setting. This painting expands upon Rousseau’s other artworks depicting surprised animals in jungle scenes.

The foliage represented in the art was inspired by the artist’s study of Paris’ botanical gardens and the many jungle pictures he collected.

The critics derided Henri Rousseau’s work during his lifetime and after his death. Still, he won a following and support among his contemporaries: Pablo Picasso, Henri Matisse, and Paul Klee, who were admirers of his work.

Many critics who ridiculed his work disparaged Rousseau’s style; however, he always aspired, in vain, to common acceptance.

Many observers commented that he painted like a child, but the work shows sophistication with his unique style and technique.

Following his funeral the following epitaph was written by his friends and put on his tombstone:

We salute you, Gentle Rousseau, you can hear us.
Let our luggage pass duty-free through the gates of heaven.
We will bring you brushes paints and canvas.
That you may spend your sacred leisure in the
light and Truth of Painting.
As you once did, my portrait facing the stars, lion, and the gypsy.

Ridiculed during his lifetime by critics, he came to be recognized as a self-taught genius whose work exerted a significant influence on several generations of avant-garde artists.

“The Repast of the Lion” by Henri Rousseau

“Beauty is the promise of happiness.”

“Excuse my scribbling, it is late, and I have a poor candle.”

“What wisdom can you find that is greater than kindness.”

Henri Rousseau: A collection of 140 paintings

The Power of Art – Henri Rousseau