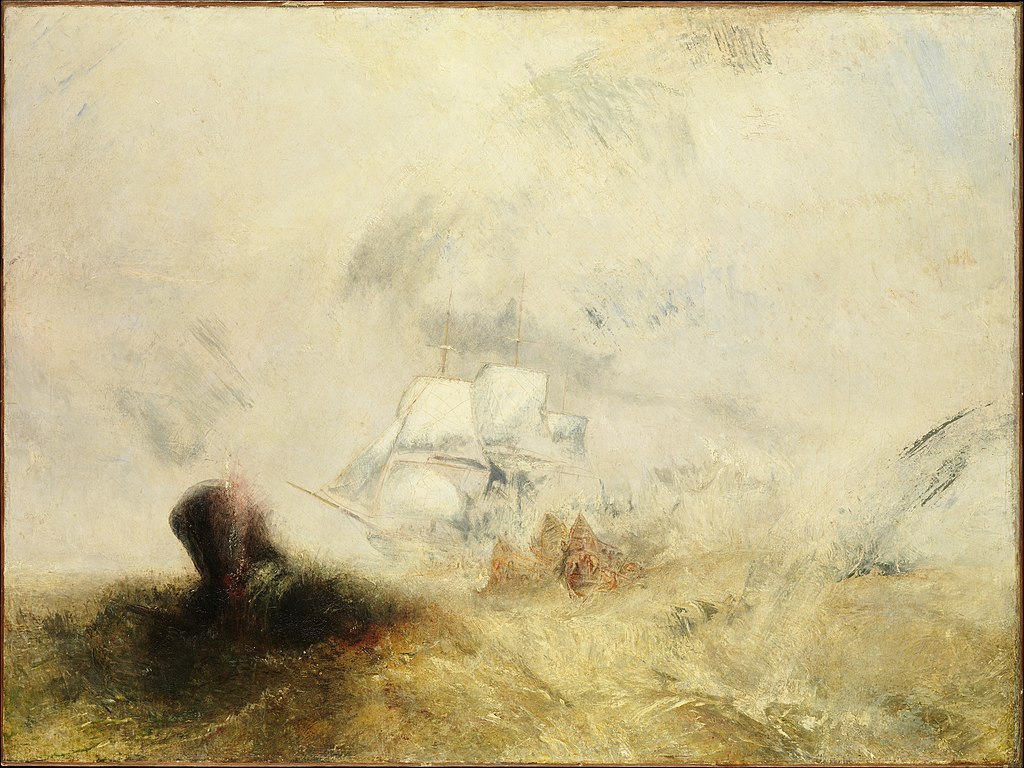 “Whalers” by J. M. W. Turner depicts a whaling ship and her whaleboats pursuing a whale. The sperm whale appears to be wounded, thrashing in a sea of foam and blood.

The whale is alive with color while in the background is a ghostly white three-masted whaling vessel.

Turner was seventy years old when be completed “Whalers” for the Royal Academy exhibition of 1845. Turner undertook the painting, for a collector who had made his fortune in the whale-oil business.

The painting was returned to him, and it had mixed critical reviews. As in other regards, Turner was ahead of his time in how he perceived the business of whaling.

“That is not a smear of purple you see yonder, but a beautiful whale, whose tail has just slapped a half-dozen whaleboats into perdition.”

A whaler was a specialized ship, designed for whaling or the catching of whales. Whaleships had two or more whaleboats, which were open rowing boats used in the capture of whales, which then brought the captured whales to the whaleships.

At first, whale catchers either brought the whales they killed to a whaling station or factory ship anchored in a sheltered bay or inlet.

During wartime in the late 18th and early 19th century, the owners of whalers frequently armed their vessels with cannons to enable the ship to protect themselves against pirates, and in wartime, privateers.

Weapons were also carried on vessels visiting Pacific islands for food, water, and wood to defend themselves from the sometimes hostile natives.

At the outbreak of the French Revolutionary Wars in 1793, British privateers captured several French whalers. At the time, many French whalers transferred to the American flag, as the United States was neutral in the Anglo-French war.

By 1900, many whales species were nearly extinct, and whaling had declined. However, it revived with the invention of harpoons shot from cannons, explosive tips, and factory ships.

Whaling expanded in the northern hemisphere, then in the southern hemisphere. As each species was reduced to the point where it was hard to find, whalers moved on to the next species.

The first attempts at regulating Whaling came when the League of Nations held a conference on whaling and in 1931 in which 27 countries signed a convention for the regulation of whaling.

Later with the United Nations proposals for 10-year moratoria were rejected multiple times, but species quotas were adopted and reduced. Consumer boycotts focused on whaling countries to protest the hunting of large whales by these countries.

In 1978, the International Whaling Commission (IWC) called for an end to international trade in whale products. In 1982, the IWC adopted a ban on commercial whaling, to start in 1986.

Some countries continue to ignore global concerns, and no international quotas were ever put on beluga whales and narwhals.

Whaling  and Whale Quotes and Puns

“I find it abhorrent to see a whale being slaughtered and do nothing but bear witness.” – Paul Watson

“As long as there is a Southern Ocean whale sanctuary, Sea Shepherd crew will continue to patrol and defend it.” – Paul Watson

“Whales in mid-ocean, suspended in the waves of the sea great heaven of whales in the waters, old hierarchies.” – D. H. Lawrence

“Size isn’t everything. The whale is endangered, while the ant continues to do just fine.” – William E Bill Vaughan

“Ask any whale their favorite James Bond movie, and they will tell you it is “License to Krill.” – Whale Pun

“You want to party with that group of Orcas because you are guaranteed a whale of a time.” – Whale Pun

J.M.W. Turner: ‘My Business is to Paint What I See’