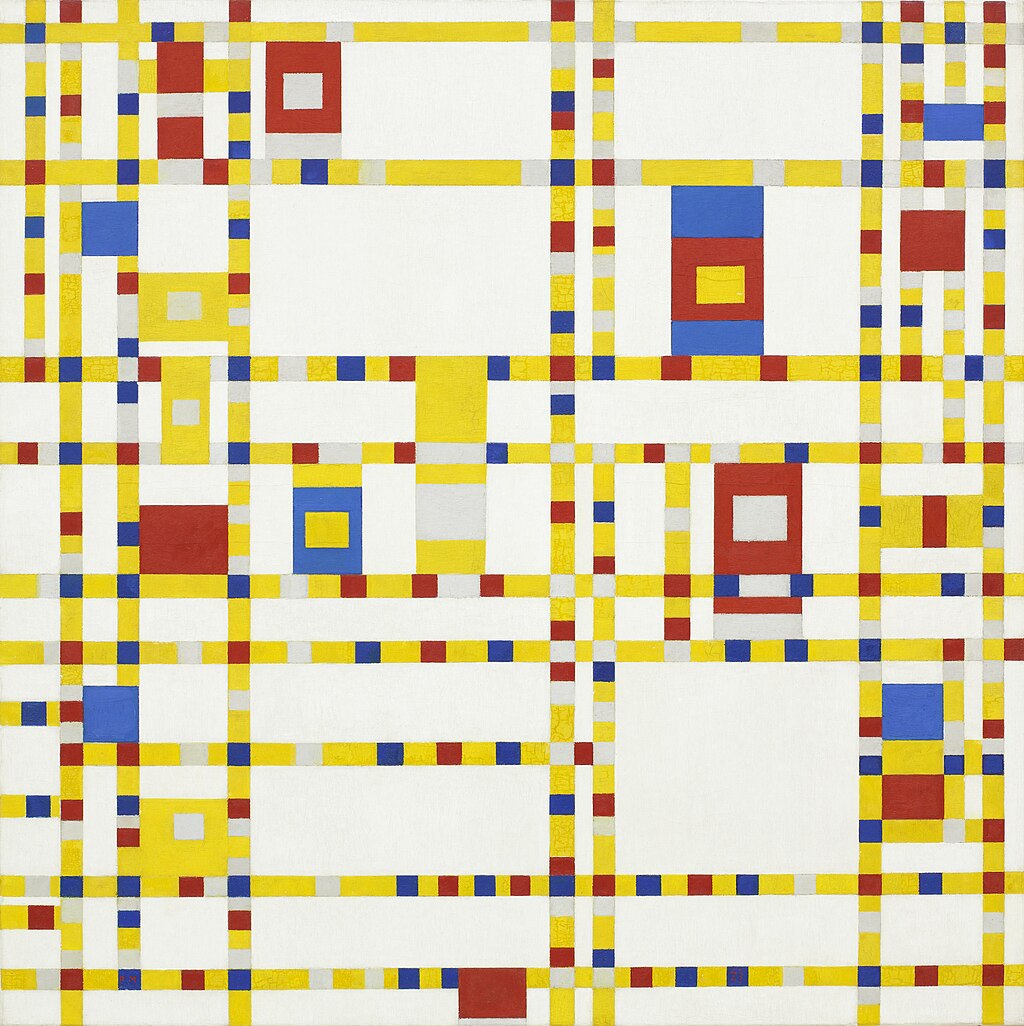 “Broadway Boogie Woogie” by Piet Mondrian was created after the artist moved to New York in 1940. Compared to his earlier work, the canvas is divided into many smaller squares.

Although Mondrian spent most of his career creating highly abstract work not directly related to reality, this painting was inspired by the real-world.

This painting was inspired by the city grid of Manhattan, and the Broadway boogie-woogie, a type of music that Mondrian loved.

The piece is made up of shimmering squares of bright color that leap from the canvas, and seem to shimmer, drawing the viewer into those neon lights of New York.

This painting is a more sophisticated version of his well-known work of abstraction “Composition with Red Blue and Yellow.” In that painting, thick, black brushwork defined the borders of the different geometric figures.

This painting is a product of the Dutch De Stijl movement, and Mondrian is regarded as the most prominent artist of the movement. He proclaimed in 1914:

“Art is higher than reality and has no direct relation to reality. To approach the spiritual in art, one will make as little use as possible of reality, because the reality is opposed to the spiritual.”

In 1940, after the fall of Paris to the Nazis, Mondrian left Europe for New York, and the art that he began in Manhattan was the beginning of a new mode of expression in art.

His painting, called New York City (1942) is a lattice of red, blue, and yellow lines. The lines occasionally interlaced to create a greater sense of depth than his earlier works. 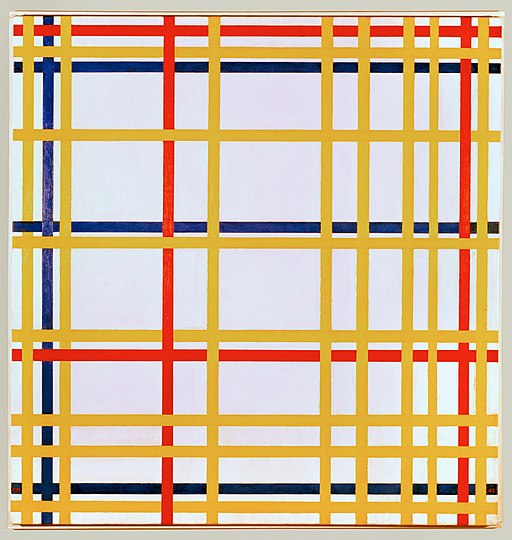 He followed this new idiom with his painting “Broadway Boogie-Woogie “(1942–43), which is displayed at The Museum of Modern Art in Manhattan. It was highly influential in the school of abstract geometric painting.

In his next picture, the unfinished “Victory Boogie Woogie” (1942–44), Mondrian replaced former solid lines with lines created from small adjoining rectangles of color, formed in part by using small pieces of paper tape in various colors.

Larger rectangles of color punctuate the design, some with smaller concentric rectangles inside them. Mondrian created this bright and lively art to reflect the upbeat music that inspired them and the city that was so different from his European experience.

Pieter Cornelis Mondriaan (1872 – 1944), who after 1906 changed his name to Piet Mondrian, was a Dutch painter and art theoretician. He was one of the pioneers of 20th-century abstract art.

He started with figurative painting but changed to an increasingly abstract style and continued to innovate. He reached a point where his art was simplified to simple geometric elements and colors.

Mondrian’s art was utopian as he searched for universal aesthetics. In 1914, he proclaimed:

“Art is higher than reality and has no direct relation to reality.
To approach the spiritual in art, one will make as little use as possible of reality,
because reality is opposed to the spiritual.
We find ourselves in the presence of an abstract art.
Art should be above reality; otherwise, it would have no value for man.”

He was a contributor to the De Stijl, a Dutch art movement which he co-founded in 1917. As he evolved a non-representational form and create what he called ‘universal beauty,’ Mondrian eventually decided to limit his art to a few colors and shapes.

He chose only to use the three primary colors of red, blue, and yellow, the three fundamental values of black, white, and grey and the two principal directions of horizontal and vertical.

Mondrian’s arrival in Paris from the Netherlands in 1911 marked the beginning of further profound change. He saw experiments in Cubism, and with his enthusiasm for the Parisian avant-garde, he removed an ‘a’ from the Dutch spelling of his birth name.

In 1938, Mondrian left mainland Europe in the face of the advancing fascism, and he moved to London. After the Netherlands, where he was born, was invaded, and Paris fell in 1940, he left London for Manhattan, where he would stay until his death.

Mondrian’s work had an enormous influence on 20th-century art. It influenced not only the course of abstract painting and many major styles and art movements but also design, architecture, and fashion.

Boogie-woogie is a musical genre that became popular during the late 1920s, developed in African-American communities in the 1870s. It was extended from piano to piano duo and trio, guitar, big band, country and western music, and gospel.

While the blues traditionally express a variety of emotions, boogie-woogie is mainly associated with dancing.

Boogie-woogie gained New York’s attention in 1938 and 1939, thanks to the “From Spirituals to Swing” concerts in Carnegie Hall. After the Carnegie Hall concerts, the swing bands incorporated the boogie-woogie beat into some of their music.

Tommy Dorsey’s band recorded an updated version of “Pine Top’s Boogie Woogie” from 1938. The new version as “Boogie Woogie” became a hit in 1943 and 1945 and was to become the swing era’s second-best seller.

The Andrews Sisters sang some boogies, and then every big band had one or two boogie numbers in their repertoire.

Upon his arrival in New York, Piet Mondrian must have been inspired by the Boogie-woogie music and named these historically epic art pieces after the music.

“It is not hard to understand modern art. If it hangs on a wall, it’s a painting, and if you can walk around it, it’s a sculpture.”
– Tom Stoppard

“The strangeness will wear off, and I think we will discover the deeper meanings in modern art.”
– Jackson Pollock

“Art is a line around your thoughts.”
– Gustav Klimt

“Should graffiti be judged on the same level as modern art? Of course not: It’s way more important than that.”
– Banksy

I have trouble with modern art. But in general, all art forms fascinate me – art is the way human beings express what we can’t say in words.
– Andrea Bocelli

“The public history of modern art is the story of conventional people not knowing what they are dealing with.”
– Golda Meir

“Modern paintings are like women; you’ll never enjoy them if you try to understand them.”
– Freddie Mercury

“The role of a museum of modern art is to make a good selection and identify what we believe to be the coming movements, and that requires taste.”
– David Rockefeller

“The principles of true art is not to portray, but to evoke.”
– Jerzy Kosinski

“Modern art has to be what is called ‘intense.’ it is not easy to define being intense, but, roughly speaking, it means saying only one thing at a time, and saying it wrong.”
– G.K. Chesterton

“I have never been against new art as such; some of it is good, much is crap, most is somewhere in between.”
– Robert Hughes

This Mondrian painting is actually a jazz score

“Experience was my only teacher; I knew little of the modern art movement. When I first saw the works of the Impressionists, van Gogh, van Dongen, and Fauves, I admired it. But I had to seek the true way alone.”
– Piet Mondrian