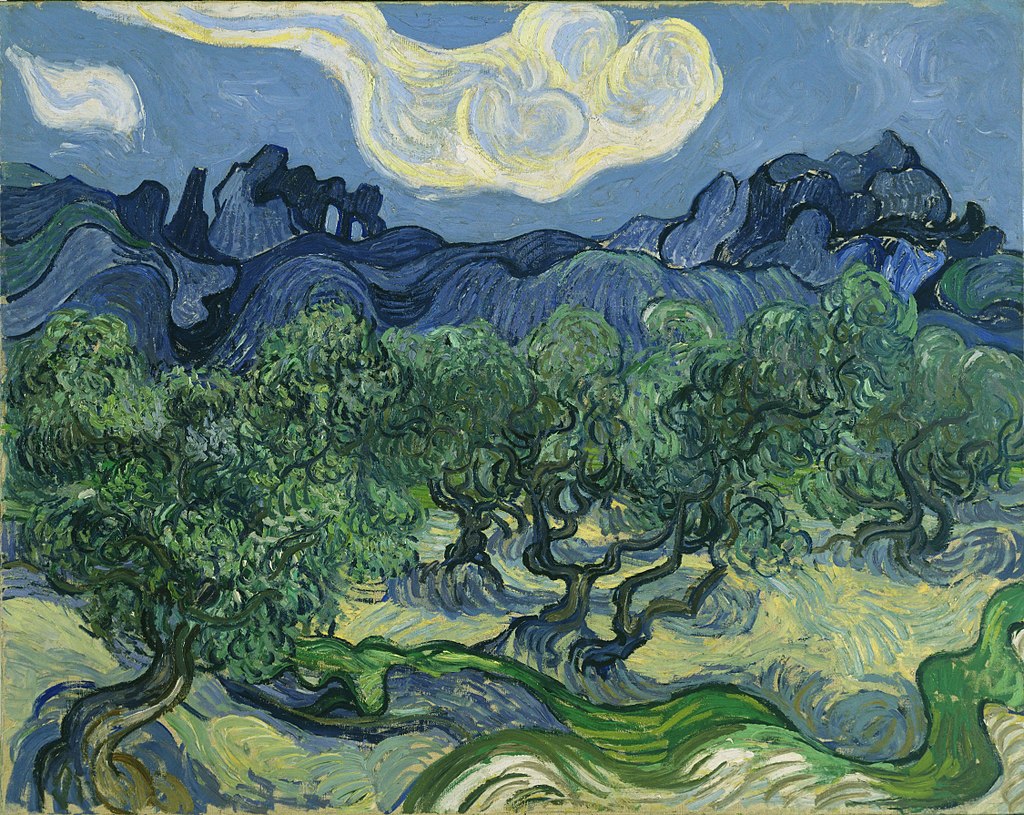 “Olive Trees with the Alpilles in the Background” by Vincent van Gogh depicts green olive trees twisting and swirling as if reflecting the radiating heat from the ground on a hot day in June 1889 in southern France.

The olive grove is capped by the rolling blue hills of the distant Alps, beneath a light-washed sky with bundled clouds engaged in their own twisting dance of nature.

The Chaîne des Alpilles in the background of this painting is a small range of low mountains in Provence, southern France. The landscape of the Alpilles is one of the arid limestone peaks separated by dry valleys.

Vincent van Gogh painted many images of the Alpilles’ landscapes during his time in Saint-Rémy-de-Provence on the north side of the mountains.

Van Gogh voluntarily entered the asylum at Saint-Rémy in the south of France in 1889, and from there he wrote his brother Theo:

“The olive trees with the white cloud and the mountains behind, as well as the rise of the moon and the night effect, are exaggerations from the point of view of the general arrangement; the outlines are accentuated as in some old woodcuts.”

This painting is the daylight partner to complement The Starry Night, the painting Van Gogh was writing about to his brother.

Van Gogh felt that both pictures showed, in complementary ways, his belief, regarding the freedom of the artist to go beyond:

“the photographic and silly perfection of some painters,”

and intensify the experience of color and linear rhythms.

Vincent van Gogh painted at least 15 paintings of olive trees, mostly in Saint-Rémy-de-Provence. He lived at an asylum there from mid-1889 through to mid-1890, painting the gardens and the surroundings of the asylum.

With permission, he ventured outside its walls, to the nearby olive trees, cypress, and wheat fields. The olive tree paintings had special significance for van Gogh.

His Olive Tree paintings represented life, the divine, and the cycle of life, while some of olive tree paintings were his attempt to symbolize his feelings about Christ in Gethsemane.

The Garden of Gethsemane is where Jesus prayed on the night of His betrayal and arrest. Gethsemane was a garden at the foot of the Mount of Olives in Jerusalem.

Today, Gethsemane has magnificent ancient olive trees that date back to hundreds of years ago, still producing olives today.

Van Gogh found respite and relief in interaction with nature. When the series of olive tree paintings were made in 1889, he was ill and emotionally in turmoil, yet the pictures are considered to be among his most beautiful works. 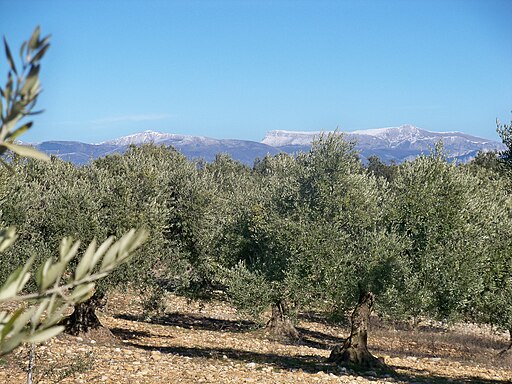 Olive Trees with the Alpilles in the Background