“The City Rises” by Umberto Boccioni

“The City Rises” by Umberto Boccioni was his first major Futurist work. Boccioni portrays the construction of a new building structure, as can be seen with scaffolding and wall projections in the upper background.

The composition, however, is dominated by men and horses, melted together in a mutual and dynamic effort.

Boccioni has emphasized in this painting the most typical elements of Futurism, the exaltation of human work, and the dynamism of a modern industrial city.

Boccioni’s approach was to depict the dynamism of form and the deconstruction of solid mass to portray the construction of modernity with developments and technology.

New developments in the suburbs and the urban environment formed the basis of many of Boccioni’s paintings. His passion was to capture of the staccato sounds of construction to the riot of sound and color offered by industrialization.

The original title of the painting was “Work,” as it first appeared at the Mostra d’arte libera Exhibition in Milan in 1911. The current title “The City Rises” captures the artist’s more dynamic vision and the start of the “Futurist” movement.

The Futurists aimed to enable the viewer to apprehend the inner being of their depictions. Boccioni developed these ideas at length in his book, “Futurist Painting Sculpture: Plastic Dynamism,” published in 1914. 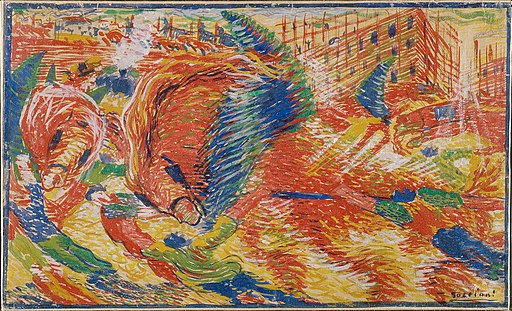 Futurism was an artistic and social movement that originated in Italy in the early 20th century. It emphasized speed, technology, youth, violence, cars, airplanes, and the industrial city.

Umberto Boccioni was a vital figure of the movement. It glorified modernity and aimed to liberate Italy from its past. Cubism contributed to the formation of Italian Futurism’s artistic style.

Although it was mostly an Italian phenomenon, there were parallel movements in other parts of Europe. The Futurists practiced in every medium of art, including painting, sculpture, ceramics, graphic design, building design, fashion, music, and architecture.

To some extent, Futurism influenced the art movements that followed, such as Art Deco, Surrealism, and Dada, and other modernist movements.

Umberto Boccioni (1882 – 1916) was an influential Italian painter and sculptor. He helped shape the revolutionary aesthetic of the Futurism movement as one of its principal figures.

Despite his short life, his approach to the dynamism of form and the deconstruction of solid mass guided artists long after his death. Many public art museums hold his works.

In 1916 Boccioni was drafted into the Italian Army and was assigned to an artillery regiment near Verona. A few months later he was thrown from his horse during a cavalry training exercise and was trampled.

He died the following day, age thirty-three, at Verona Military Hospital, and he was buried in the Monumental Cemetery of that city.

“We must now learn to draw inspiration from the tangible miracles that surround us.”
– Umberto Boccioni