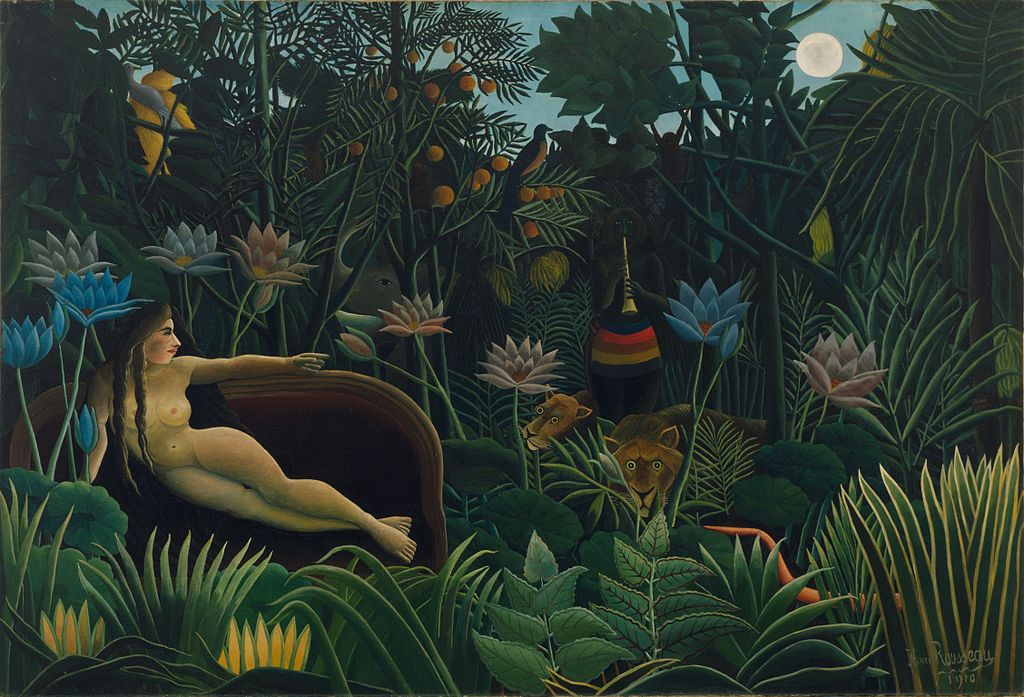 “The Dream” by Henri Rousseau is one of 25 paintings by Rousseau with a stylized jungle theme. The jungle plants are based on Rousseau’s observations at the Paris Museum of Natural History and its Jardin des Plantes.

It features a portrait of Rousseau’s Polish mistress from his youth, lying naked on a divan.

She is gazing over a landscape of lush jungle foliage, including lotus flowers, and animals including birds, monkeys, an elephant, a lion and lioness, and a snake.

The Dream is the largest of the jungle paintings. It was his last completed work, a few months before his death in 1910.

Rousseau’s earlier works had received a negative reception, but poet and critic Guillaume Apollinaire remarked on its debut:

“The picture radiates beauty, that is indisputable. I believe nobody will laugh this year.”

The nude’s left arm reaches towards the lions and a black snake charmer who faces the viewer playing his flute, barely visible in the gloom of the jungle under the dim light of the full moon.

Rousseau may have taken inspiration from Émile Zola’s novel Le Rêve, which deals with the love between a painter and an embroideress.

Suspecting that some viewers did not understand the painting, Rousseau wrote a poem to accompany the painting:

“Yadwigha (the women’s name) in a beautiful dream
Having fallen gently to sleep
Heard the sounds of a reed instrument
Played by a well-intentioned [snake] charmer.
As the moon reflected
On the rivers [or flowers], the verdant trees,
The wild snakes lend an ear
To the joyous tunes of the instrument.”

Many critics who ridiculed his work disparaged Rousseau’s style. However, he always aspired, in vain, to common acceptance.

Many observers commented that he painted like a child, but the work shows sophistication with his unique style and technique. Following his funeral the following epitaph was written by his friends and put on his tombstone:

We salute you, Gentle Rousseau, you can hear us.
Let our luggage pass duty-free through the gates of heaven.
We will bring you brushes paints and canvas.
That you may spend your sacred leisure in the
light and Truth of Painting.
As you once did, my portrait facing the stars, lion, and the gypsy.

“Beauty is the promise of happiness ”

“What wisdom can you find that is greater than kindness. ”

“The happiest is the person who suffers the least pain; most miserable the ones who enjoy the least pleasure ”

“Nothing makes me so happy as to observe nature and to paint what I see.”

A song about Henri Rousseau’s “The Dream”