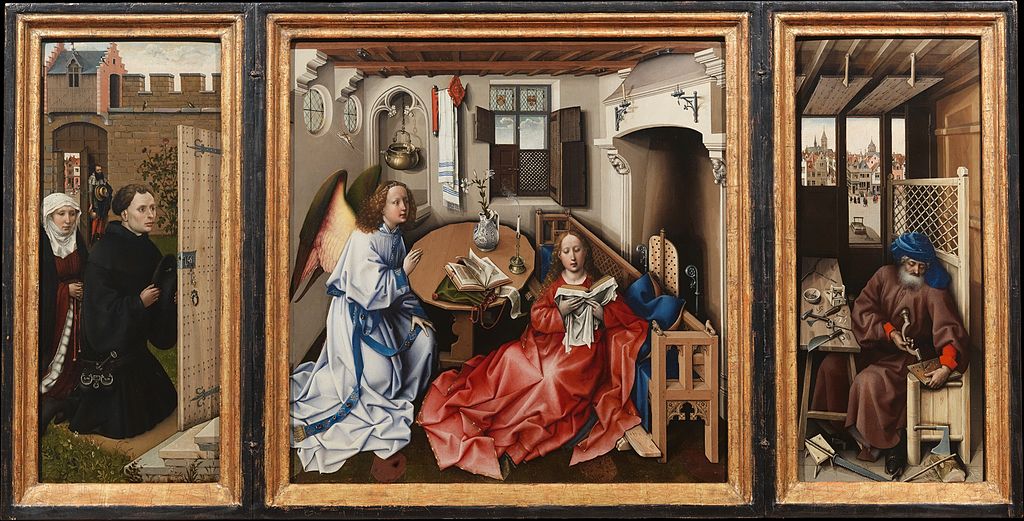 Annunciation Triptych by Robert Campin, which is also known as the Mérode Altarpiece, is oil on oak in three panels format. This masterpiece represents from left to right, the donors kneeling in prayer in a garden, the Annunciation to Mary, which is set in a contemporary, domestic setting, and Saint Joseph as a carpenter.

The painting contains many religious symbols, including the lily symbolizing the purity of Mary. The Holy Spirit is represented by the rays of light and a small white figure with a cross, coming from the left-hand window in the central panel.

The Annunciation is the Christian celebration of the announcement by the angel Gabriel to the Virgin Mary that she would conceive and become the mother of Jesus, the Son of God, marking his Incarnation.

The Annunciation has been a central theme in Christian art in the Catholic Church, particularly during the Middle Ages and Renaissance. Interestingly, Annunciation is also described in the Quran.

Mary, the mother of Jesus, holds a singularly exalted place in Islam as the only woman named in the Quran.

Campin completed the central panel; however, the outer panels were added later by Campin’s workshop assistants.

The additional panels were added at the request of the donors, who wanted to be depicted in the Triptych to demonstrate their faith. The side panels contain views of the city of Liège, in today’s Belgium.

This Triptych by Robert Campin is a significant milestone in the emerging late Gothic and the Early Netherlandish style.

It derives from the medieval tradition; however, more importantly, it establishes the foundation for the development of modern painting.

Robert Campin was the first great master of Flemish and Early Netherlandish painting. He was highly successful during his lifetime, and his activities are relatively well documented, but he did not sign or date his works.

Campin was active by 1406 as a master painter in Tournai, in today’s Belgium.

Early Campin panels show the influence of the leading Gothic artists but display more realistic observations which he achieved through innovations in the use of oil paints.

World History during the time this painting was created in 1432

A Tour of the Cloisters

The Backstory of the Merode Altarpiece by Robert Campin

“God writes the Gospel not in the Bible alone,
but also on trees, and in the flowers and clouds and stars.”
– Martin Luther