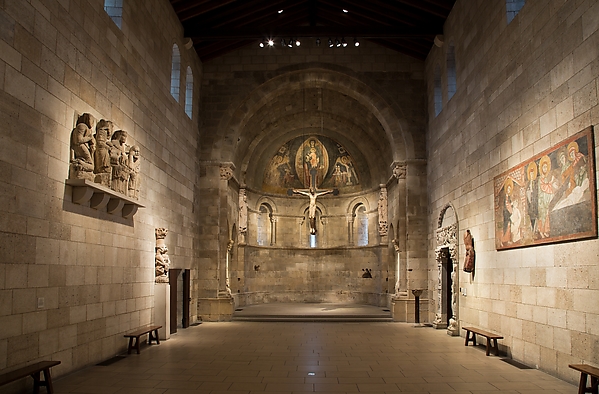 The Fuentidueña Apse is a Romanesque apse which dates to before the 1200s built as part of the San Martín Church at Fuentidueña, Spain. It was built when the town was of strategic importance to Castile’s Christian kings in their defense against Moorish invaders.

The church was constructed on an imposing hill below a fortified castle. Today the apse is part of the Met Cloisters in New York. The Met Cloisters is a museum specializing in European medieval art and architecture, focusing on the Romanesque and Gothic periods.

The structure was disassembled into almost 3,300 mostly sandstone and limestone blocks, each individually cataloged, and shipped to New York.

It was rebuilt at the Cloisters in the late 1940s. It was such a complex reconstruction, and the chapel was not opened to the public until 1961.

The capitals at the entrance contain representations of the Adoration of the Magi and Daniel in the lions’ den. The piers show Martin of Tours on the left and the angel Gabriel announcing to The Virgin on the right. The chapel includes other, mostly contemporary, medieval artwork.

In the dome, they include a large fresco dating to between 1130–50, from the Spanish Church of Sant Joan de Tredòs. The fresco resembles a Byzantine mosaic and is dedicated to Mary’s idea as the mother of God.

Hanging within the apse is a crucifix made between about 1150 to 1200 for the Convent of St. Clara in Astudillo, Spain. Its reverse contains a depiction of the Lamb of God, decorated with red and blue foliage at its frames.

In architecture, an apse is a semicircular recess covered with a hemispherical vault or semi-dome. In Christian church architecture, the term is applied to a semi-circular or polygonal termination of the main building where the altar is at the liturgical end.

The domed apse became a standard part of the church plan in the early Christian era. Smaller apses may also be in other locations, especially shrines.

Romanesque architecture is an architectural style of medieval Europe characterized by semi-circular arches. In the 12th century, it developed into the Gothic style, marked by pointed arches.

The Romanesque style in England is traditionally referred to as Norman architecture.

The style combining features of ancient Roman and Byzantine buildings and other local traditions, Romanesque architecture is known for its massively thick walls, round arches, pillars, barrel vaults, and decorative arcading.

The style can be identified right across Europe, despite regional characteristics and different materials.

The Fuentidueña Apse: A Journey from Castile to New York

Tour of the Cloisters

“After about the first Millennium, Italy was the cradle of Romanesque architecture, which spread throughout Europe, much of it extending the structural daring with minimal visual elaboration. “
– Harry Seidler