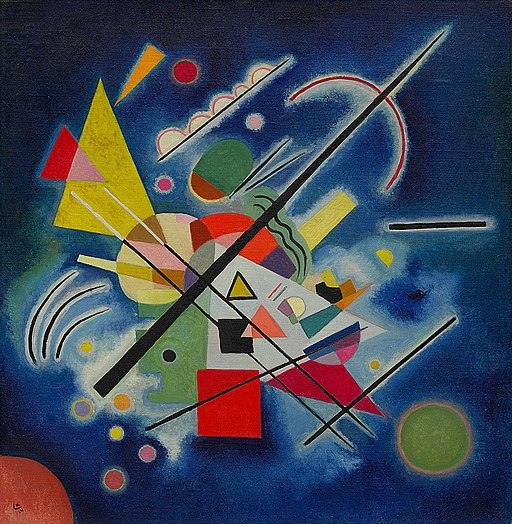 “Blue Painting” by Vasily Kandinsky was produced during his Bauhaus period, in Germany. It was during a period when Kandinsky taught basic design and advanced color theory and where he also conducted painting classes.

His examinations of the effects of forces on straight lines led to his contrasting tones on curved and angled lines. Geometrical elements took on increasing importance, particularly the circle, half-circle, the angle, straight lines, and curves.

Kandinsky augmented his color theory with the elements of visual psychology and Gestalt psychologist research, which had an influenced on him.

In the study of perception, Gestalt psychologists stipulate that impressions are the products of complex interactions among various stimuli.

The gestalt effect is the capability of our brain to generate complete forms, particularly about the visual recognition of global figures instead of just collections of more straightforward and separate elements such as points, lines, and curves.

In this painting and many of Kandinsky’s works, the identification of the forms and masses presented on the canvas is the superficial view.

The inner reality of the work requires profound observation of the relationship of all the elements and their harmony.

The Bauhaus was a German art school operational from 1919 to 1933 that combined crafts and the fine arts and was famous for the approach to design that it promoted.

Founded in Weimar, German, the term means “building house” and was understood as implying “School of Building” as its founder was an architect.

The Bauhaus style later became one of the most influential currents in modern design and had a profound influence upon subsequent developments in art, architecture, graphic design, interior design, and industrial design.

The school was closed under pressure from the Nazi regime. Subsequently, its key members, such as Vasily Kandinsky, continued to spread its idealistic precepts as they left Germany and emigrated all over the world.

The Bauhaus style eventually had a significant impact on art and architecture trends in the decades following its demise, as many of the artists involved fled or were exiled by the Nazi regime.

The influence of the Bauhaus on all aspects of design was significant. One of the main objectives of the Bauhaus was to unify art, craft, and technology.

This approach to design education became a common feature of architectural and design schools in many countries.

Wassily Kandinsky (1866 – 1944) is credited with painting one of the first recognized purely abstract works. Born in Moscow, he studying law and economics and began painting studies at the age of 30.

Kandinsky was unsympathetic to the official theories on art in Communist Moscow, and he moved to Germany in 1920.

There, Kandinsky taught at the Bauhaus school of art and architecture from 1922 until the Nazis closed it in 1933.

He then moved to France, where he lived for the rest of his life, becoming a French citizen in 1939 and producing some of his most prominent art.

“Color is a power which directly influences the soul.”
– Wassily Kandinsky