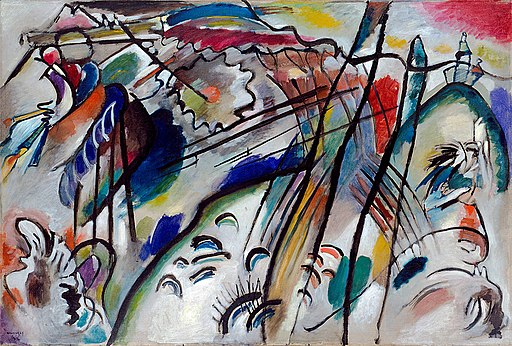 “Improvisation 28 (2nd version)” by Vasily Kandinsky (also spelled Wassily) is an expressive abstract that is independent of forms and lines.

Music was an essential catalyst for early abstract art, and Kandinsky used musical terms to identify his works. He called his spontaneous paintings “improvisations” and described elaborate works as “compositions.”

In many of Kandinsky’s works, the identification of the forms and the masses present on the canvas require a more involved analysis.

Wassily Kandinsky is credited with painting one of the first recognized purely abstract works. Born in Moscow, he studying law and economics and began painting studies at the age of 30.

Kandinsky was unsympathetic to the official theories on art in Communist Moscow and moved to Germany in 1920.

There, he taught at the Bauhaus school of art and architecture from 1922 until the Nazis closed it in 1933.

He then moved to France, where he lived for the rest of his life, becoming a French citizen in 1939 and producing some of his most prominent art.

“I value those artists who embody the expression of their life.”

“Color is a means of exerting direct influence on the soul.”

“That is beautiful, which is produced by the inner need, which springs from the soul.”

“There is no must in art because art is free.”

“The artist must train not only his eye but also his soul.”

‘The more abstract is form, the more clear and direct it’s appeal.”

“The arts are encroaching one upon another, and from a proper use of this encroachment will rise the art that is truly monumental.”

“Of all the arts, abstract painting is the most difficult. It demands that you know how to draw well, that you have a heightened sensitivity for composition and color, and that you be a true poet. This last is essential.”

“Color provokes a psychic vibration. Color hides a power still unknown but real, which acts on every part of the human body.”

“An empty canvas is a living wonder… far lovelier than certain pictures.”

“Color is a power which directly influences the soul.”

“Everything starts from a dot.”

Improvisation 28 by Kandinsky and Expressionism

“The artist must train not only his eye but also his soul.”
– Wassily Kandinsky