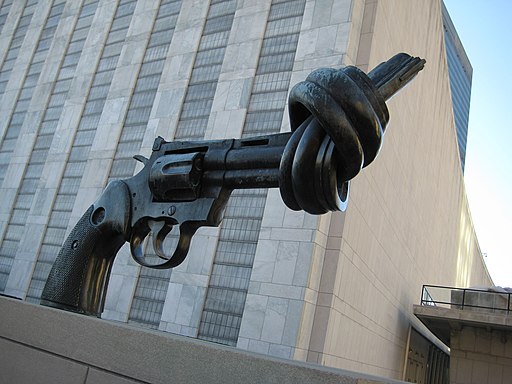 According to Kofi Annan, the 7th Secretary-General of the United Nations:

“It has enriched the consciousness of humanity with a powerful symbol that encapsulates, in a few simple curves, the greatest prayer of man; that which asks not for victory, but peace.”

Since 1993, the sculpture has been the symbol of The Non-Violence Project (NVPF), a nonprofit organization that promotes social change through violence-prevention education programs.

There are currently 31 copies of this sculpture around the world. Locations include:

On the evening of 8 December 1980, English musician John Lennon, formerly of the Beatles, was fatally shot in the archway of the Dakota, his residence in New York City.

The perpetrator stated that he was incensed by Lennon’s lifestyle and public statements.

As the news rolled out across the world, there was a worldwide outpouring of grief that ensued on an unprecedented scale.

Strawberry Fields is a 2.5-acre (1.0 ha) landscaped section in New York City’s Central Park that is dedicated to the memory of former Beatles member John Lennon.

It is named after the Beatles’ song “Strawberry Fields Forever,” written by Lennon. The song itself is named for the former Strawberry Field children’s home in Liverpool, England, located near Lennon’s childhood home.

The Non-Violence Project Foundation (NVP) is a non-profit organization whose mission is to inspire, motivate, and engage young people on how to solve conflicts peacefully.

It holds violence prevention and nonviolence education programs for schools and sports clubs around the world.

Sir Paul McCartney, Ringo Starr, and Yoko Ono are, among others, ambassadors of the Non-Violence Project.

Reuterswärd is best known for his sculpture showing a revolver tied in a knot, called Non-violence, on display outside the Headquarters of the United Nations in New York City.

The Story of the Knotted Gun