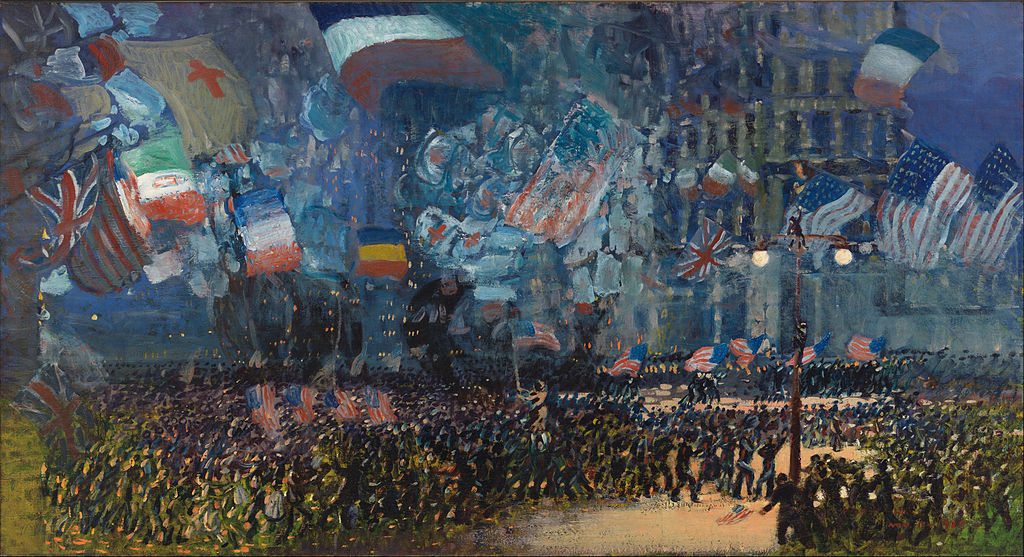 “Armistice Night” by George Luks depicts one of the energetic, flag-waving celebrations of the Armistice that marked the end of World War I. The motion of the human drama in the celebratory crowd echoes the flight of a flock of birds across the landscape.

The Armistice of 1918 was the armistice signed in France that ended fighting on land, sea, and air in World War I between the Allies and Germany. Previous armistices had been agreed with Bulgaria, the Ottoman Empire, and the Austro-Hungarian Empire.

Luks capturing the event in swift strokes, demonstrating his years as an illustrator. In his early career, he was an illustrator for the Philadelphia Press, where he became practiced in quickly sketching scenes of breaking news.

Luks does not focus on the details; the painting is a blur of American and Allied flags, faces, and bodies in the shadow of New York’s buildings.

Blue smoke from the firework obscures the background, and no individuals stand out in the crowd. Typically, Luks focused on the spirit of the moment rather than the visual details.

The Armistice of 11 November 1918 was the armistice that came into force at 11:00 a.m. On 11 November 1918, Paris time marked the victory for the Allies and a defeat for Germany, although not formally a surrender.

The terms included the cessation of hostilities, the withdrawal of German forces to behind the Rhine, Allied occupation of the Rhineland, the surrender of military materiel, the release of Allied prisoners of war and interned civilians.

Although the armistice ended the fighting, the armistice initially expired after a period of 36 days. It had to be extended several times until the Treaty of Versailles, which was signed in 1919.

The Armistice’s celebration has become the centerpiece of memories of the war, along with salutes to the unknown soldier.

Coincidentally, the license plate of Archduke Franz Ferdinand’s car that he was riding at the time of his assassination that triggered the war was “A III 118”, which has been translated as “Armistice, 11/11/1918”.

George Benjamin Luks (1867 – 1933) was an American artist, painter, and illustrator. His vigorously painted genre paintings of urban subjects were part of the Ashcan School movement of American art.

Luks is most well known for his depictions of New York City; he also painted landscapes and portraits and was an accomplished watercolorist.

Armistice: The signature that ended World War I

“Armistice Day is a constant reminder that we won a war and lost the peace.”
– General Omar N. Bradley