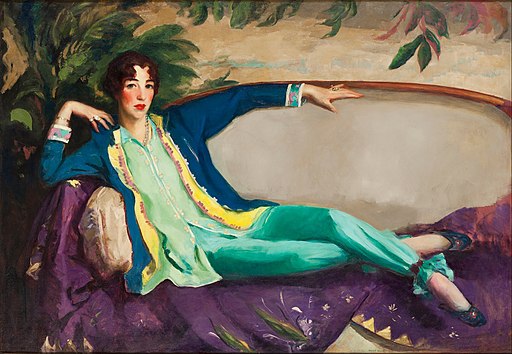 “Gertrude Vanderbilt Whitney” by Robert Henri depicts the wealthy American heiress who was also a sculptor, art patron, and collector.

Henri transformed the traditional pose of a recumbent female, usually a courtesan or the goddess Venus into a portrait of an independent modern woman.

Gertrude Vanderbilt Whitney commissioned this portrait in 1916 from Robert Henri, a popular and influential teacher at the Art Students League of New York. Henri was a leader of the urban realist painters and a popular teacher and mentor to women artists.

Whitney was a professional sculptor and had founded the Whitney Studio in Greenwich Village, an exhibition space and hub for new American art.

Whitney’s husband, Harry Payne Whitney, refused to allow her to hang Henri’s portrait in their Fifth Avenue townhouse. He didn’t want his friends to see a picture of his wife in pants.

Harry Payne Whitney was an American businessman and member of the prominent and wealthy Whitney family.

Mrs. Whitney’s attire and self-possessed demeanor were highly unusual for a high-society woman of her day.

The portrait was hung in Whitney’s West 8th Street studio, which in 1931 became the first home of the Whitney Museum.

The Whitney Museum of American Art was founded in 1930 by Gertrude Vanderbilt Whitney. It focuses on 20th- and 21st-century American art. 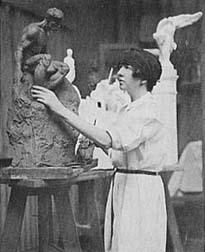 Gertrude Vanderbilt Whitney (1875 – 1942) was an American sculptor, art patron and collector, and founder of the Whitney Museum of American Art in New York City.

She was a prominent social figure and hostess born into the wealthy Vanderbilt family and married into the Whitney family.

Her great wealth allowed her to become a patron of the arts, but she also devoted herself to women’s advancement in the arts.

Whitney donated money to the Society of Independent Artists founded in 1917, which aimed to promote artists who deviated from academic norms. She actively bought works from new artists, including the Ashcan School.

The Whitney Women and The Museum They Made

Robert Henri (1865 – 1929) was an American painter and teacher. He was a leading figure of the Ashcan School of American realism.

Henri was an organizer of the group known as “The Eight,” a loose association of artists who protested the restrictive exhibition practices of the powerful, conservative National Academy of Design.

In 1929, Henri was named one of the top three living American artists by the Arts Council of New York.

“You must always have great, secret, big fat hopes for yourself in love and life. The bigger, the better.”
– Gertrude Vanderbilt Whitney