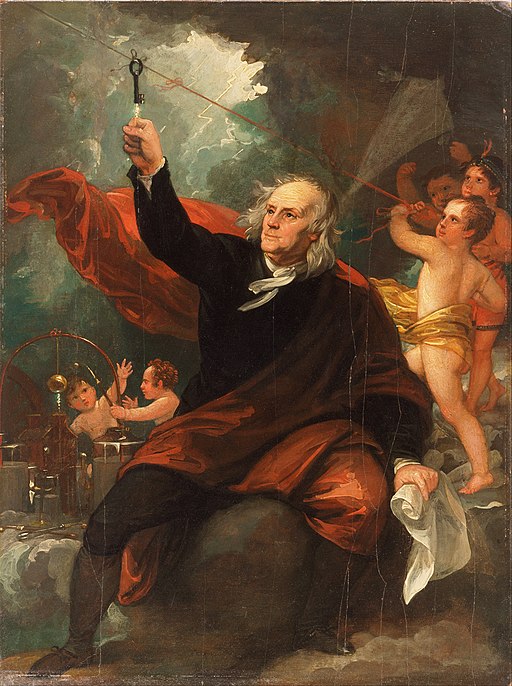 “Benjamin Franklin Drawing Electricity from the Sky” by Benjamin West depicts the American founding father, conducting his kite experiment to ascertain the electrical nature of lighting.

This dramatic painting commemorates the 1752 experiment in Philadelphia in which Benjamin Franklin demonstrated that lightning is a form of electricity.

West was born in Pennsylvania, in 1738, when the American colonies were still part of the British Empire. While he was in London, West befriended Franklin, a fellow Pennsylvanian, but did not create this painting of the American statesman until after his death.

West created this oil on slate, as a study for a larger, but an unrealized portrait.

Benjamin Franklin (1706 – 1790) was an American polymath and one of the Founding Fathers of the United States. Franklin was a writer, painter, politician, Freemason, postmaster, scientist, inventor, statesman, and diplomat.

As a scientist, he was a significant figure in the American Enlightenment and the history of physics for his discoveries and theories regarding electricity.

As an inventor, he is known for the lightning rod, bifocals, and the Franklin stove, among other inventions.

Drawing Electricity from the Sky

Franklin started exploring the phenomenon of electricity in 1746 when he saw lectures demonstrating static electricity.

In 1748, he constructed a multiple plate capacitor, that he called an “electrical battery” by placing eleven panes of glass sandwiched between lead plates, suspended with silk cords, and connected by wires.

Franklin was the first to label terminals as positive and negative, respectively, and he was the first to discover the principle of conservation of charge. In recognition of his work with electricity, Franklin received honorary degrees from Harvard and Yale universities.

Franklin published a proposal for an experiment to prove that lightning is electricity by flying a kite in a lightning storm. In 1752, Franklin conducted his kite experiment in Philadelphia, successfully extracting sparks from a cloud.

Franklin described the experiment in the Pennsylvania Gazette. Franklin was careful to stand on an insulator, keeping dry under a roof to avoid the danger of electric shock.

Others were indeed electrocuted in performing lightning experiments during the months immediately following Franklin’s experiment.

Franklin was aware of the dangers and did not perform this experiment, as pictured in popular literature. Instead, he used the kite to collect some electric charge from a storm cloud, just enough to show that lightning was electrical.

In a letter to England with directions for repeating the experiment, Franklin wrote:

“When rain has wet the kite twine so that it can conduct the electric fire freely, you will find it streams out plentifully from the key at the approach of your knuckle, and with this key, a phial, or Leyden jar, may be charged.”

Franklin’s electrical experiments led to his invention of the lightning rod. He surmised that this could help protect buildings from lightning by attaching:

“upright Rods of Iron, made sharp as a Needle and gilt to prevent Rusting, and from the Foot of those Rods a Wire down the outside of the Building into the Ground;
… Would not these pointed Rods probably draw the Electrical Fire silently out of a Cloud before it came nigh enough to strike,
and thereby secure us from that most sudden and terrible Mischief!”

Following a series of experiments on Franklin’s own house, lightning rods were installed on the Academy of Philadelphia (later the University of Pennsylvania) and the Pennsylvania State House (later Independence Hall) in 1752.

Though Benjamin Franklin has been most noted kite-wise for his lightning experiments, he has also been noted for his using kites to pull humans and ships across waterways.

Franklin sought to cultivate his character by a plan of 13 virtues, which he developed at age 20 and continued to practice in some form for the rest of his life.

Franklin did not try to work on them all at once. Instead, he would work on one and only one each week, “leaving all others to their ordinary chance.”

Franklin did not live entirely by his virtues, and he fell short of them many times, he believed the attempt made him a better man.

He impressed King George III and was mostly responsible for the launch of the Royal Academy, of which he became the second president after Sir Joshua Reynolds.

A Virtual Tour of the Philadelphia Museum of Art

Franklin Drawing Electricity from the Sky

So Why Is Franklin Famous?

How Ben Franklin Structured His Day