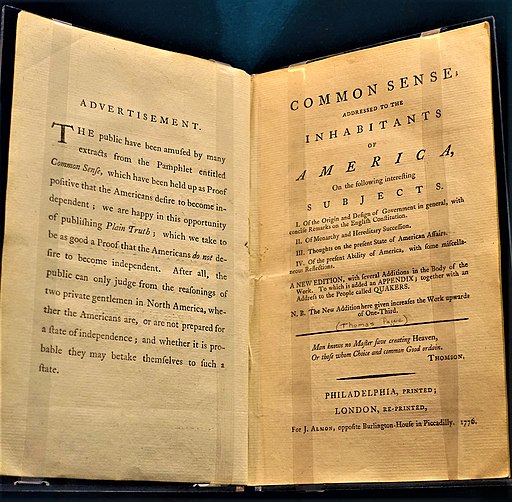 “Common Sense” by Thomas Paine was written in 1775–76 as a pamphlet advocating for the independence of the Thirteen Colonies.

Paine used persuasive moral and political arguments to encourage the ordinary people in the Colonies to fight for an equal government.

It was published anonymously at the beginning of the American Revolution and became an immediate bestseller.

Paine connected independence with common Protestant beliefs to present a distinctly American political identity, structuring Common Sense as if it were a sermon.

“Common Sense” was sold and distributed widely and read aloud at taverns and meeting places. In proportion to the population of the colonies at that time, it had the largest sale and circulation of any book published in American history.

For nearly three months, Paine managed to keep up his anonymity. Later he decided to repudiate his copyright, which meant that more publishers jumped on to the best seller and to promote it heavily.

Common Sense was an impressive piece of propaganda advocating action and a set of principles. Together with its immense publicity and readership, Common Sense accelerated attitudes to independence.

Common Sense was so influential that John Adams said: “Without the pen of the author of Common Sense, the sword of Washington would have been raised in vain.”

One of the Founding Fathers of the United States, he authored the most influential pamphlet at the start of the American Revolution. He inspired the Patriots in 1776 to declare independence from Britain.

Born in the English county of Norfolk, Paine emigrated to the British American colonies in 1774, arriving just in time to take part in the American Revolution.

Virtually every rebel read or listened to a reading of his pamphlet Common Sense (1776), which crystallized the rebellious demand for independence from Great Britain.

The British government of William Pitt the Younger, worried that the French Revolution might spread to England, begun to suppress works of radical philosophies.

Paine’s work was targeted, with a writ for his arrest issued in 1792. Paine fled to France and, despite not being able to speak French, was elected to the French National Convention.

The Girondists regarded him as an ally. Consequently, the Montagnards, especially Maximilien Robespierre, saw him as an enemy.

James Monroe used his diplomatic connections to get Paine released in 1794. He published the pamphlet “Agrarian Justice” (1797), discussing the origins of property and introduced the concept of a guaranteed minimum income.

In 1802, he returned to the U.S., where he died in 1809. Only six people attended his funeral as he had been ostracized for his views of Christianity.

A Tour of the Museum of the American Revolution

“Give me liberty or give me death.”

“From the errors of other nations, let us learn wisdom,”

“Suspicion is the companion of mean souls and the bane of all good society.”

“These are the times that try people’s souls.”

“Those who expect to reap the blessings of freedom must undergo the fatigues of supporting it.”

“If there must be trouble, let it be in my day, that my child may have peace.”

“From the errors of other nations, let us learn wisdom,”
– Thomas Paine, Common Sense