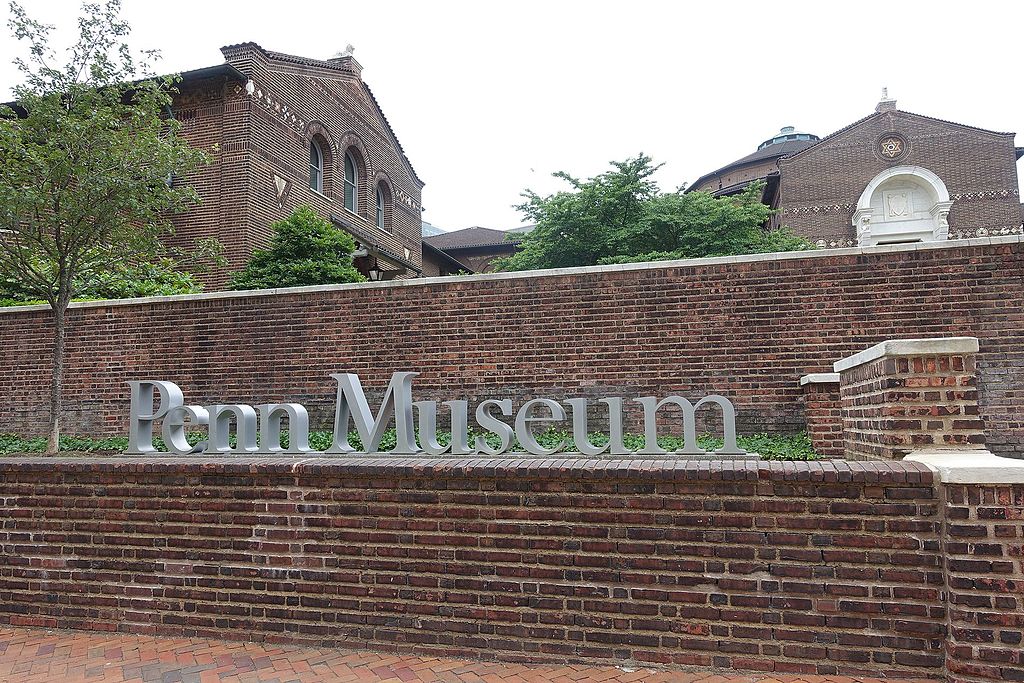 Penn Museum’s collections fall into two main categories: archaeology, the artifacts recovered from the past by excavation, and ethnology, the objects and ideas collected from our Cultural Heritage.

More than 20 galleries feature objects from around the world and throughout the ages.

A Virtual Tour of the University of Pennsylvania Museum

Highlights of the Penn Museum

Marble Portrait of Agrippina, the Elder

This Marble Portrait depicts Agrippina the Elder (14 BC – 33 AD). Vipsania Agrippina, commonly known as Agrippina, the Elder, was a distinguished and prominent Roman woman.

Her husband, Germanicus, was a general and statesman and a relative to the first Roman Emperors. Germanicus was a great-nephew of Emperor Augustus, and Agrippina bore nine of Germanicus’ children.

This marble sculpture is a Herm of Herakles and Hermes. A herm is a sculpture with a head above a plain, usually squared lower section.

The form originated in Ancient Greece and was adopted by the Romans, and revived during the Renaissance in the forms of Term and Atlantes in architectural elements in classical buildings.

This marble head depicting Emperor Caracalla is an imperial portrait. Portraits of Roman Emperors ranging from small palm-sized statues to large colossal sculptures were distributed throughout the empire.

This statue of Caracalla is not large enough to serve as a public propaganda vehicle. It was probably owned by a wealthy private supporter who wanted to demonstrate loyalty.

This “Cult Statue Head of Diana” is assumed to be a cult statue of Diana because it is idealized, conservatively styled, large-scale, and discovered near Nemi’s important temples. It was probably adorned with a bronze or gold diadem.

This Wine Transport Amphora was found in a Mediterranean shipwreck by the underwater explorer Jacques Cousteau. Cousteau recovered some 1,200 amphoras from the Grand Congloué island near Marseille, off the southern coast of France.

This Greenstone Mask is made of dark green soft stone with a natural white-colored large spot represent eyes.

Originating from Central America, it is thought to belong to the Toltec culture. The name Toltec has many meanings, including an “urbanite” or a “cultured” person.

This 5,000-year-old “Egyptian Stela Fragment” is a Stele that depicts a seated couple, sculpted in sunken relief.

It shows a wife and husband with the small figure of a servant holding a jar and offering a drink of beer to the man with Hieroglyphic text above the figures.

This “Cone” with Cuneiform inscription was used by Sumerians and other Mesopotamian cultures beginning in the third millennium BC.

These Sumerian historical objects are also called “clay nails” or “foundation pegs.” Sumer was the first urban civilization and is the site of the earliest known civilization, located between the Tigris and Euphrates rivers, in the area that is now southern Iraq.

These “Clovis Weapons and Tools” are ancient tools that are over 10,000 years old created by the Clovis culture initially based around the current day Clovis, New Mexico, US.

The Clovis culture is a prehistoric Paleo-Indian culture, named for the distinct stone tools discovered in the 1920s and 1930s.

This Mayan Altar was discovered in Caracol, which is a vast ancient Mayan archaeological site, located in what is now Belize. It rests on a plateau, which is 500 meters above sea level, in the foothills of the Maya Mountains. Caracol is recognized as one of the most important regional political centers of the Maya Lowlands during the Classic Mayan Period.

The “Shawabti of King Senkamanisken” is a funerary figurine for Senkamanisken, who was a Nubian king, ruling from 640 to 620 BCE at Napata.

Napata was a city-state of ancient Nubia on the west bank of the Nile River, at the site of modern Northern Sudan. Nubia had gained control over Egypt but lost it shortly before Senkamanisken came to power.

Egyptian in style, this Shawabti shows the influence of Egyptian art and culture on Nubia at this time.

“Coptic Pendant Crosses” have been worn by Ethiopians, like other Christians, as a visual symbol of their faith over 1,600 years.

The crosses above are of various configurations, some are ornamental works formed into delicate tracery, some are decoratively notched, and some are of a simple cross-shape with incising.

These “Jar Handles with Judean “Royal Stamp” belonged to storage jars that were made nearly 3,000 years ago, which have visible impressions of stamps on their handles.

The stamp impressions consist of an inscription in palaeo-Hebrew together with a symbol. The inscription on the handle above reads “lmlk,” which translates to “belonging to King.” The royal logo is a four-winged beetle.

Anubis: Jackal in a God’s Clothing

The University of Pennsylvania Museum of Archaeology and Anthropology has undertaken over 300 archaeological and anthropological expeditions around the world.

In 1887, the University of Pennsylvania to erect a specialist building to house artifacts from the expedition to the ancient site of Nippur in modern-day Iraq.

During this period, western museums regularly sponsored such excavations throughout the Mediterranean and Near East, sharing the ownership of their discoveries with the host country.

Thus the majority of Penn Museum’s collections have a known and scholarly documented archaeological context, increasing their value for research and education purposes.

Today the Museum’s gallery space feature collections from the ancient Mediterranean World, Egypt, the Near East, Mesopotamia, East Asia, and Mesoamerica, as well as artifacts from the indigenous peoples of Africa and Native America. The principal collections include:

The museum’s most important collection is of the Royal Tombs of Ur, which The University of Pennsylvania co–excavated with the British Museum in Iraq.

Ur was an important city-state in ancient Sumer, and the artifacts from its royal tombs showcase the city’s culture. The collections consist of a variety of crowns, figures, and musical instruments.

The museum’s Babylonian section houses a collection of almost 30,000 clay tablets inscribed in Sumerian and Akkadian cuneiform, making it one of the largest collections in the world, ranging from 2900 to 500 BCE.

The museum’s collection house an extensive collection of sculptures, mummies, and reliefs. The museum also houses Egyptian columns and a 13-ton granite Sphinx of Ramesses II and a significant Papyrus collection.

The Penn Museum has one of the largest collections of African ethnographic and archaeological objects from all regions of Africa, with significant artifacts from the Democratic Republic of the Congo, Gabon, Angola, Morocco, Sierra Leone, Ivory Coast, Senegal, Nigeria, Kenya, Tanzania, Ethiopia, South Africa, Namibia, Botswana, and Madagascar.

The Chinese collection includes some of the finest Chinese sculptures in America, including the reliefs of Emperor Tang Taizong’s six horses, which he used to unify China during the Tang Dynasty.

The Museum excavated the Mayan city of Tikal, Guatemala, from 1956 to 1970. Essential artifacts from this excavation in the museum, include several stelae from the contemporary cities of Caracol and Piedras Negras.

Over thirty indigenous tribes from Brazil are represented in the ethnographic collection, including twelve indigenous groups from Guyana and over twenty-five native groups from Peru.

Building works at the Penn Museum

The Penn Museum is upgrading some of its galleries and amenities, which will dramatically reconfigure the Museum’s historic building.

Some galleries might be closed, and some of the collection might not be on display during the construction works. Check with the museum for the latest details.

The Penn Museum is located at 3260 South Street, Philadelphia, at the intersection of Spruce Street and 33rd Street.

Nearby landmarks include Franklin Field, across South Street, and the Hospital of the University of Pennsylvania, across 34th Street.

The University of Pennsylvania Museum of Archaeology and Anthropology

Expedition – Powerful Women of Ur

“The lure of the past came up to grab me. To see a dagger slowly appearing, with its gold glint, through the sand was romantic. The carefulness of lifting pots and objects from the soil, filled me with a longing to be an archaeologist myself.”
– Agatha Christie