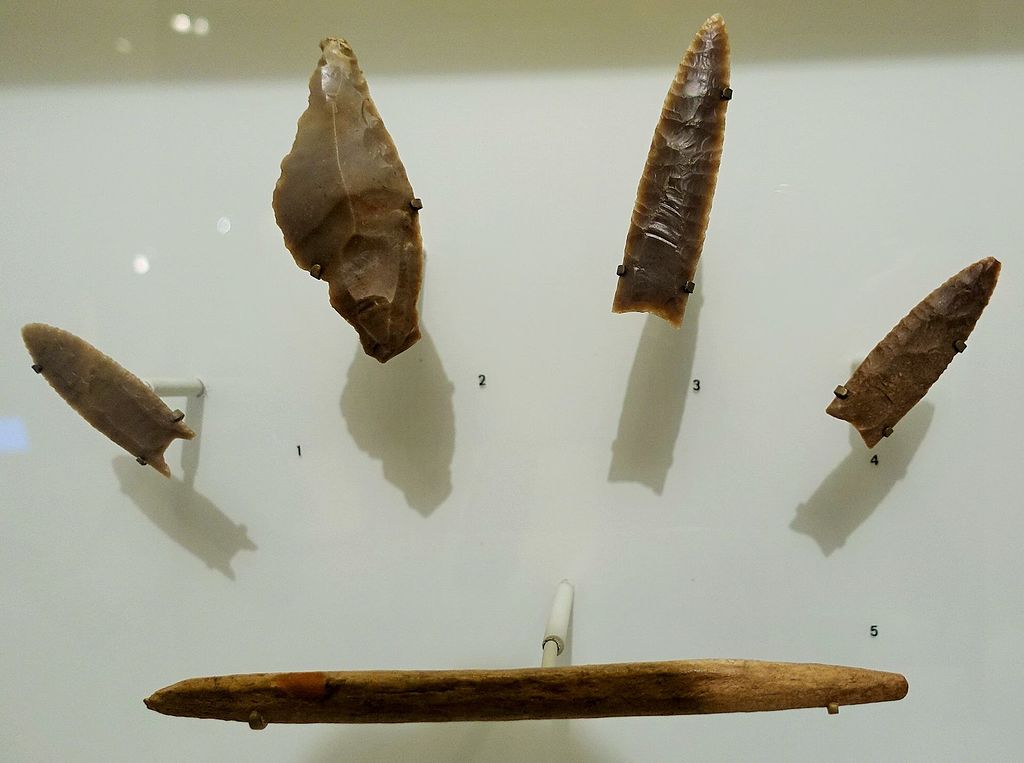 These “Clovis Weapons and Tools” are ancient tools that are over 10,000 years old. The Clovis culture was based initially around the current-day Clovis, New Mexico, US.

The Clovis culture is a prehistoric Paleo-Indian culture, named after the area where the stone tools discovered in the 1920s and 1930s.

This Paleo-Indian culture is characterized by the manufacture of “Clovis points” and distinctive bone and ivory tools. Clovis people are considered to be the ancestors of most of the indigenous cultures of the Americas.

The historical objects above have been named and dated as follow:

These objects were recovered in near several complete mammoth skeletons and species of extinct bison. These objects confirm that people inhabited North America as long as 12,000 years ago.

Clovis points are the characteristically-fluted projectile points. A Clovis projectile point is created by using bifacial percussion flaking, which means that each face is flaked on both edges.

Clovis points are thicker than the typically thin later-stage Folsom points. Whether the points were knife blades or spear points is not known.

Folsom points were a later development and had a distinct form of chipped stone projectile points.

The points have edges that were finely worked into a symmetrical, leaf-like shape with a concave base and wide, shallow grooves running almost the entire length of the point.

The discovery of the Clovis artifacts began when a cowboy found an ancient bison skeleton in 1908 after a flash flood. The site was then excavated in 1926, near Folsom, New Mexico.

This was the location of the first find in its original place, Folsom. This confirmation of an early human presence in the Americas inspired the interest to look for further evidence of early humans.

In 1929, the Clovis site was discovered near the Blackwater Draw in eastern New Mexico. The best-documented evidence of the Clovis complex was collected and excavated between 1932 and 1937.

A Tour of the Pennsylvania Museum of Archaeology and Anthropology

Pre-Clovis Archaeology Along the Savannah River

“We will be known forever by the tracks we leave.”
– Dakota Proverb