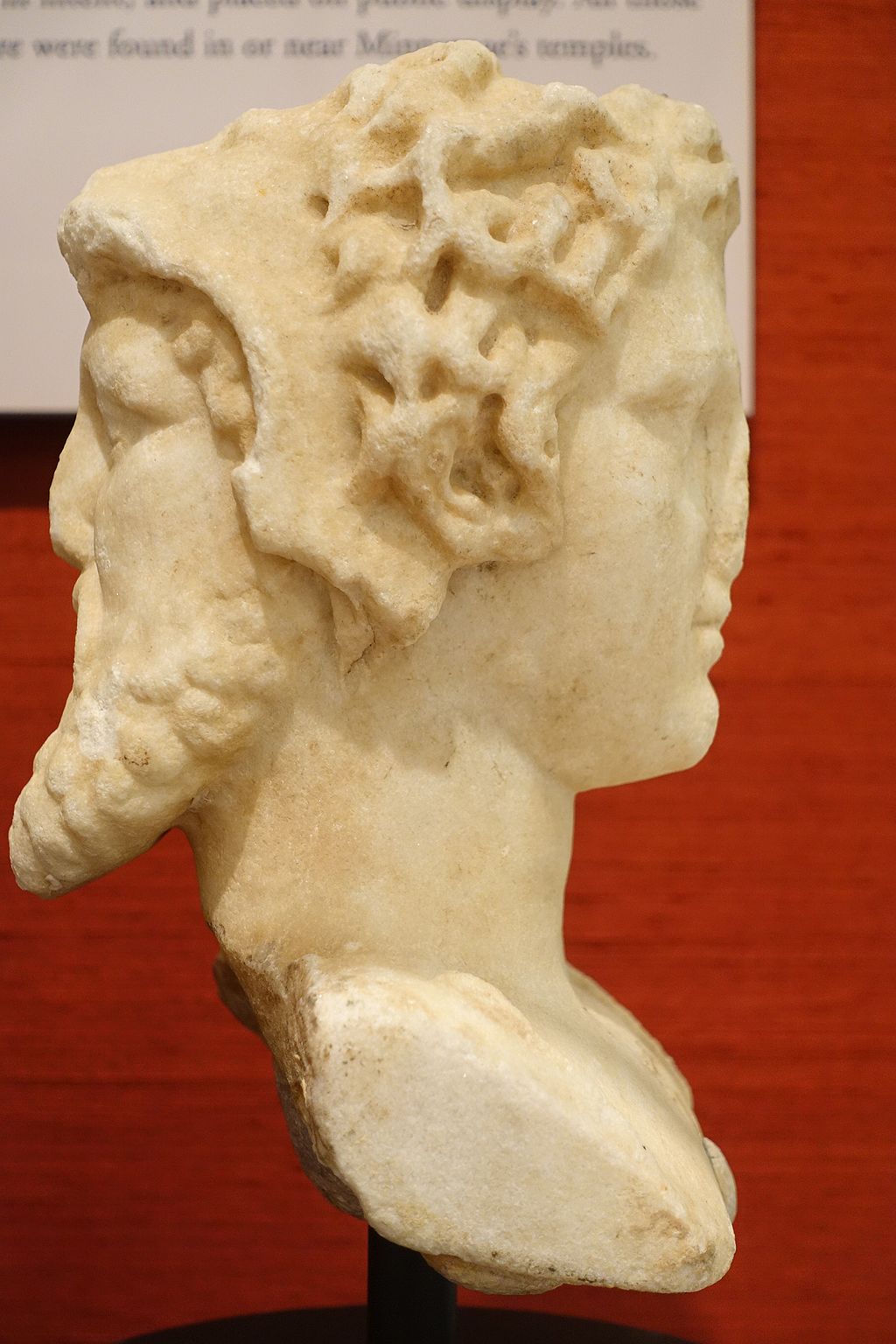 This marble sculpture is a Herm of Herakles and Hermes. A herm is a sculpture with a head above a plain usually squared lower section. The form originated in Ancient Greece and was adopted by the Romans, and revived during the Renaissance in the forms of Term and Atlantes in architectural elements in classical buildings.

This Herm is a janiform or double-headed herm of Herakles and Hermes. In ancient art, the double-headed herms were a common statue type. The combination of the two mythological and religious figures owed something to the personal inclinations of the person or community who commissioned it. The presentation of two Roman gods as double herms was the most common use of this Herma genre.

The bearded mature face is that of Herakles or Heracles who was a divine hero in Greek mythology and the son of Zeus. He was the greatest of the Greek heroes, a paragon of masculinity. In Rome, he was known as Hercules, with whom the later Roman emperors, often identified themselves. The Romans adopted the Greek version of his life and works essentially unchanged, but added the anecdotal detail of their own.

The youthful face is that of Hermes who was an Olympian god in Greek religion and mythology. As the son of Zeus, he is considered a god of transitions. He is also portrayed as an emissary and messenger of the gods. In the Roman adaptation of the Greek pantheon, Hermes is identified with the Roman god Mercury, who, though inherited from the Etruscans, developed many similar characteristics such as being the patron of commerce.

Initially, Greek divinities were worshipped in the form of a  shapeless column of stone or wood. In many parts of Greece, there were piles of stones, as religious monuments, by the sides of roads, especially at road crossings. The religious respect paid to such monuments of stones, especially at the crossing of roads, is shown by the custom of each passer-by throwing a stone onto the monument or anointing it with oil. Later there was the addition of a head to the column, which evolved into a quadrangular form. In Roman and Renaissance versions, the body was often shown from the waist up. The Herm form was also used for portrait busts of famous public figures.

“Life is neither good or evil, but only a place for good and evil.”
– Marcus Aurelius