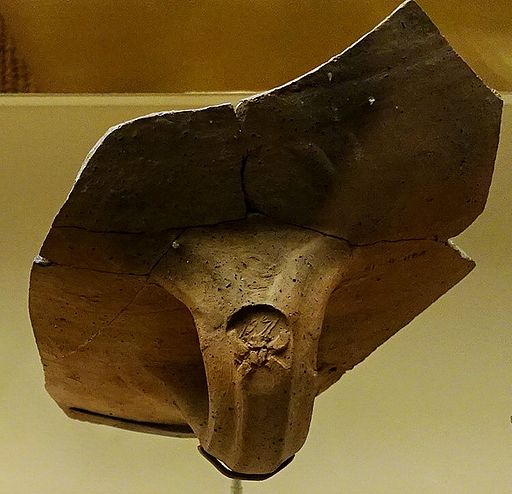 These “Jar Handles with Judean “Royal Stamp” belonged to storage jars that were made nearly 3,000 years ago, which have visible impressions of stamps on their handles.

The stamp impressions consist of an inscription in palaeo-Hebrew together with a symbol. The inscription on the handle above reads “lmlk,” which translates to “belonging to King.” The royal symbol is a four-winged beetle.

These stamped jars were part of a centralized system to distribute the products of the Judean royal agricultural estates to administrators and soldiers. These large storage jars were used to contain wine, grain, or oil.

It is argued that the jars held food intended for the army and civilians as part of the preparations for the revolt by Hezekiah ( 716-687 BC), King of Judah, against Assyria.

One of the seal impressions on the handle is inscribed with “lmsl m’lntn,” which translates to “belonging to the “Meshulam [son of] ‘Elnatan.”

The other handle is inscribed with “lmlk mmst,” which translates to ‘belonging to King. The place-name “mmst” is an unknown name and has the symbol of a four-winged beetle.

Almost two thousand of these stamped jar handles have been discovered with variations of royal symbols and place names. Most have an inscription in paleo-Hebrew reading “lamelek,” which means “belonging to the King.”

The place names were probably administrative centers in Judah where taxes in kind were brought and stored.

Recent scientific research on ceramic jars handle fragments from ancient Judea have revealed that the Earth’s geomagnetic field has been undulating for thousands of years.

Data obtained from the analysis of well-dated Judean jar handles provide valuable insights on the historical changes in the strength of the earth’s geomagnetic fields.

y studying these Jar Handles, scientists now have proof that the earth’s magnetic field has fluctuated violently in the past, without dooming our planet.

A seal impression discovered in Jerusalem

“A righteous man falls seven times and gets up.“
– King Solomon, Proverbs, 24:16