These Sumerian Clay Nails Foundation Pegs with Cuneiforms inscriptions were used by the Sumerians and other Mesopotamian cultures 4,000 years ago.

Named by archaeologists as “clay nails” or “foundation pegs,” these cone-shaped dedication artifacts were made of clay and inscribed with cuneiform.

They were engraved, baked, and then inserted into the mud-brick walls to serve as evidence that the temple or building was the divine property of the god to whom it was dedicated.

King Lipit-Ishtar of Isin commissioned these cones. The translation reads:

“I am Lipit-Ishtar, humble shepherd of Nippur,
a true farmer of Ur,
the unceasing one of Eridu,
the proper lord of Uruk,
the king of Isin,
the king of Sumer and Akkad,
the one born in the heart by Inanna.
When I had established justice in Sumer and Akkad,
I built the “House of Justice” at the irrigation canal,
the outstanding place of the gods.”

These Cones with their Cuneiform script inscriptions give us some of the oldest ‘documents’ in our history, documenting the sponsor, responsible for the construction and dedication of a building.

They also offer some of the earliest accounts, and historical intrigues were boasting led to factual inaccuracies and miss-statements of facts.

The Cuneiform script, on the cones, is one of the oldest systems of writing and was invented by the Sumerians. It is identified by its wedge-shaped marks on clay, made by a blunt reed as a stylus. 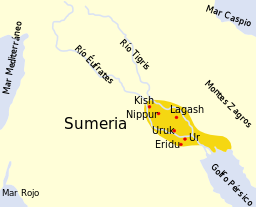 Sumerian cities referenced on the Cone: Ur, Eridu, and Uruk

Emerging in the towns of Sumer nearly 6,000 years ago, cuneiform writing began as a system of pictograms. The pictorial representations then became simplified and more abstract as the number of characters in use reduced.

Sumeria was the first urban civilization and is the site of the earliest known civilization, located between the Tigris and Euphrates rivers, in the area that is now southern Iraq.

JOY OF MUSEUMS” in cuneiform, courtesy of Penn Museum website.

The Phoenician alphabet gradually replaced cuneiform writing during the Neo-Assyrian Empire (911–612 BC).

About 2,000 years ago, the Cuneiform script had become extinct, as all knowledge of how to read it was lost until it was deciphered in the 19th century.

Mesopotamian clay ‘foundation’ cones ….what was their purpose?

“Give me!” is what the king says.”
– Sumerian Proverbs