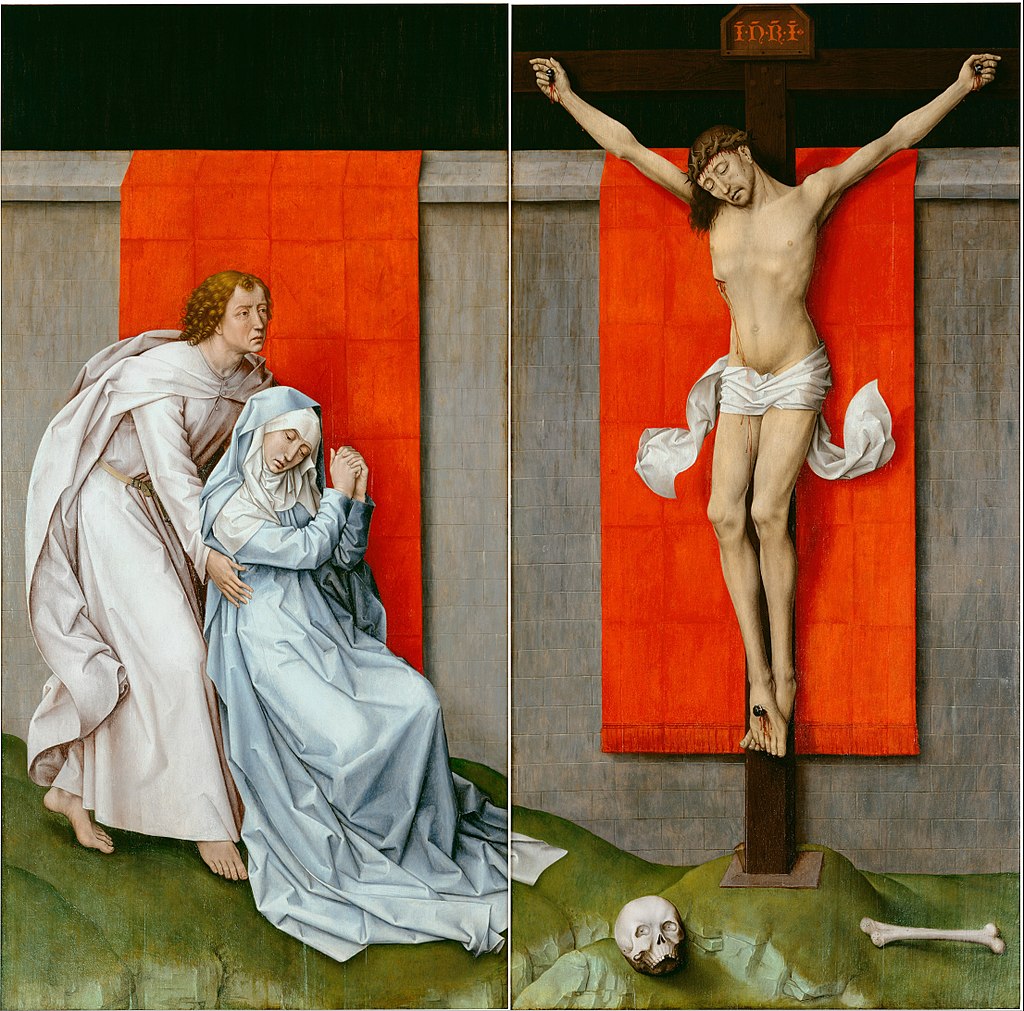 The “Crucifixion Diptych” is a diptych from 1460, attributed to Rogier van der Weyden. The two panels are noteworthy for their technical skill and their severe impact.

This painting possesses a directness unusual for the art of the time in the Netherlands. The background to the panels is unknown, and there are many unanswered questions about this “Old Master Painting.”

The extreme starkness of this painting points to its creation as a devotional work, possibly for a monastery.

Some art historians have mentioned that the work seems unbalanced and lacking in symmetry, which might indicate a missing panel.

The speculation is that tier was a third panel on the right of Christ.  The right panel depicts a Crucifixion scene, and the figures are almost two-thirds life-size.

Christ’s blood is visible and is amplified by the red cloth draped behind him. The body hangs from the arms, forming a Y-shaped figure.

The skull and bone, at the foot of the Cross, are symbolic of the first man, Adam.

Crucifixion scene on the right panel

The left panel shows the Virgin Mary, supported by Saint John. Both are dressed in sculptured folded robes and also presented before a draped red cloth.

The wall gives the effect of pushing the figures into the foreground. The dark sky is a direct reference to the scripture:

“Now, from the sixth hour, there was darkness over all the land unto the ninth hour.” Matthew 27:45

Detail of the Mary and St. John panel.

Christian art is sacred art which uses themes and imagery from Christianity.

Images of Jesus and narrative scenes from his life are the most common subjects, and scenes from the Old and New Testaments play a part in the art of many Christian denominations.

Christianity makes far more extensive use of images than other religions, in which figurative representations are forbidden, such as Islam and Judaism.

However, there is also a history of aniconism in Christian history.

Rogier van der Weyden’s “The Crucifixion, with the Virgin and Saint John the Evangelist Mourning”

Rogier van der Weyden, The Crucifixion, with the Virgin and Saint John the Evangelist Mourning